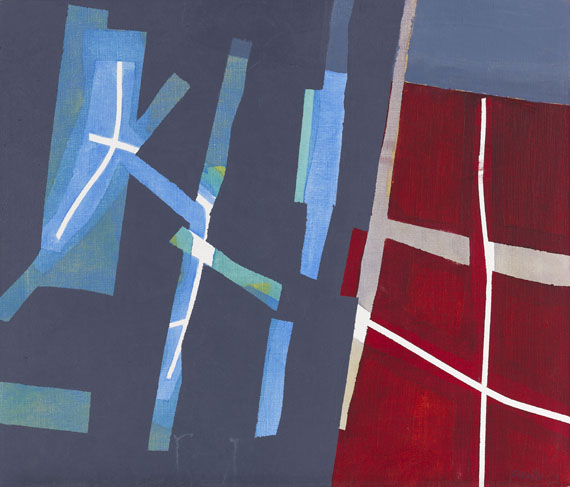 Fritz Winters œuvre is structured by the sequel of different periods of creation, in which he made works that belong together structurally. This work belongs to the so-called "Schablonenbildern" (Stencil Pictures), that Winter made between 1967 and 1975. what makes these works so special is the artist's technical approach, because Fritz Winter worked out parts of his works with stencils in order to create sharply defined, mostly striped outlines. The effect of this technique is remarkably in many ways: On the one hand, Winter created a clearly structured and yet tremendously dynamic composition that allows the observer manifold visual experience. On the other hand, Fritz Winter created an almost three-dimensional concept of space with the overlapping color fields. In a fascinating contrast of cool and warm colors on the left and right side as well as in contrasting soft glazing and rich color application "Lineare Spiegelung" is an outstanding example from this period of creation.

On the occasion of his 60th birthday, the artist was honoured with large retrospectives in several German cities. He received the 'Großes Bundesverdienstkreuz' in 1969. He retired from his chair in Kassel in 1970 and returned to Diessen on the Ammersee. A Fritz-Winter-House was opened in Ahlen in 1975. Fritz Winter died on 1 October 1976. Even before his death Winter was considered one of the most famous German post-war artists. [KP].