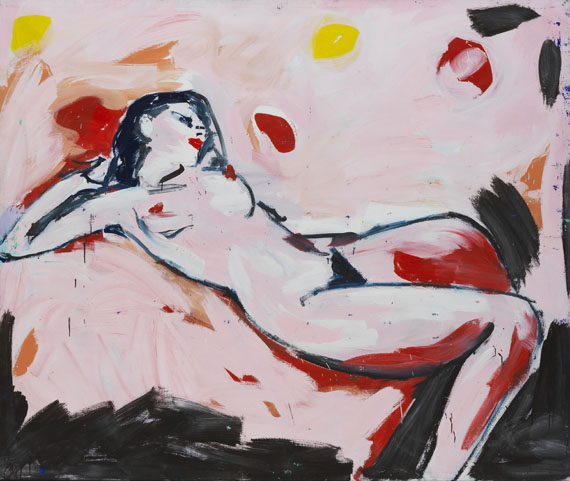 Before the Swiss artist Luciano Castelli gained international recognition through his participation in the documenta 5 in 1972, he had made a three-year apprenticeship as a sign painter as of 1969. The versatile artist cannot be put in a drawer, he is active as drawer, painter and sculptor and is likewise occupied with performance-, object- and photo art. In 1978 he went to Berlin, where he met the “Neuen Wilden“ (New Wild Artists), whose ecstatic mentality is all in line with his own concept of art. He made works with Salomé and Rainer Fetting. In his Berlin phase Castelli made paintings, which, just as it is the case with this nude "Rosa Nackte", are characterized by a passionate expressivity and strong colors. As of the late 80s, when he had settled in Paris, Castelli attained a calmer and more controlled style, however, he still has an exuberant creativity and lust for experiments. Luciano Castelli‘s works are in numerous renowned museums, among others, the Kunstmuseum Basel and the Museum of Modern Art, New York. [KH].

More Information
+
Sell
Get a free appraisal for a similar object!
+
Register for
Luciano Castelli
+
Buying from A-Z
+
Contact a specialist
Share