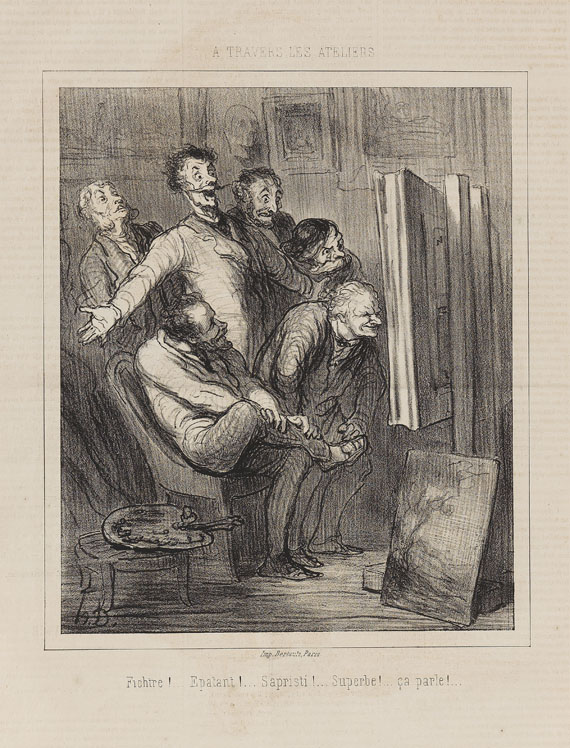 In early 1860 Honoré Daumier was made redundant by the publisher of “Le Charivari“, Charles Philipon, after he had been active for the satirical magazine for almost thirty years. With new artists from a younger generation, the magazine had gradually changed from an initially revolutionary and strongly anti-monarchic orientation to an almost conformist. In the following years Daumier worked for the illustrated weekly magazine “Le Boulevard“, which was founded by Etienne Carjat, journalist, artist and photographer. Between January 1862 and June 1863 some 76 issues were published with texts by, among others, Charles-Pierre Baudelaire and Victor Hugo as well as illustrations by renowned contemporary artists. What was so special about “Le Boulevard“ was the aspect that it illustrated life in Paris and France during the second empire under Napoleon III. in the years between 1852 and 1870 quite well. The literary and illustrated contributions were at times anecdotal and humorous, but also critical. Because of the great success, a separate series of the graphic sheets was published in larger edition under the title “Souveniers d'Artistes“. Daumier made a total of 11 illustrations for “Le Boulevard“. The ironic-critical tone has become milder than in his earlier, relatively sharp illustrations of the years of the revolution. “A Travers les Ateliers“ was published in “Le Boulevard“ in 1862 and was Daumier‘s last contribution for this magazine. The sheet shows six men in a studio showing their spontaneous reaction to a work of art that we cannot see. The title and the caption underline these surprised and positive reactions: “It sounds through the studio: I'll be jiggered! … Awesome! … Terrific! … Lovely! … That’s appealing!“ The seated man could be the painter Jean-Baptiste Camille Corot; perhaps he made the painting, the palette can be seen in left of the foreground. The person behind him could be Daumier himself, who scrutinizes the work with slitted eyes. The man in center, opening his arms with amazement, seems to be Daumier‘s friend, the landscape painter and lithographer Jules Dupré. The three gentlemen in the background do not seem to share the enthusiam.

Public perception of French painting in the 19\up5 th century was strongly coined by the annual exhibitions of academic art in the “Salon de Paris“, which was opposed by non-conformist tendencies, such as the School of Barbizon (with painters like Corot and Dupré), which would later influence Impressionism. Controversial debates were led about the new tendencies. In this small scene Daumier depicts the different reactions of the art lovers with great poise: some are skeptic and deprecative, the others show great acknowledgement. This way Daumier shows how subjective the reception of art always is in a very humorist manner. [CB].