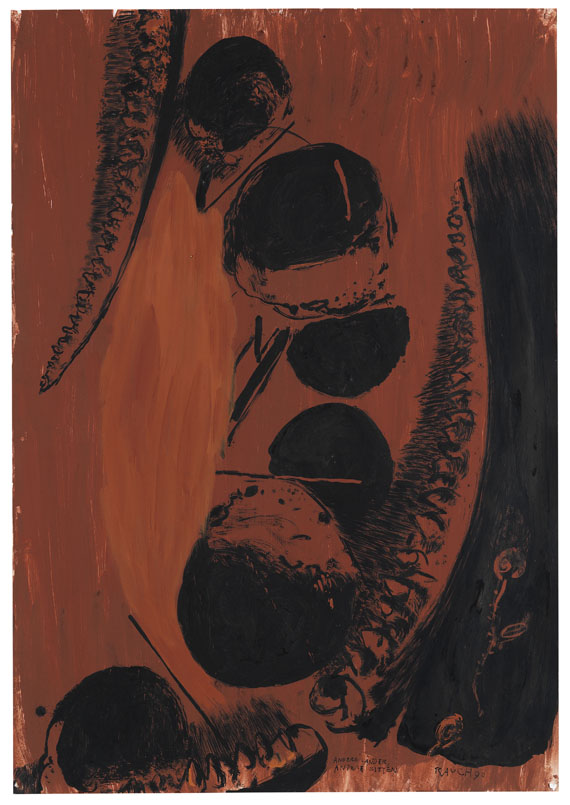 Neo Rauch, born in Leipzig in 1960, is a protagonist of the "New Leipzig School". What artists of the “New Leipzig School" have in common is their study place, the "Hochschule für Grafik und Buchkunst" in Leipzig, as well as their teachers, among them Bernhard Heisig, Wolfgang Mattheuer, Werner Tübke or Arno Rink, which were all members of the first and second generation of the "Leipziger Schule". Neo Rauch‘s artistic career is inseparable from the Leipzig "Hochschule für Grafik und Buchkunst", which he attended between 1981 and 1986, and where he master student in the class of Bernhard Heisig until 1990, from 1993 to 1998 he was assistant professor and from 2005 to 2009 he was professor for painting and graphic art, followed by a honorary professorship.

Neo Rauch’s study days In Leipzig in the 1980s, first under Arno Rink, than as master student of Bernhard Heisig, was a time of searching. The period during which the artist focussed on abstraction laid the fundament for later works in terms of craftsmanship, representation and composition. These early neo-expressionist works already emanate the energy and intensity that is characteristic of Neo Rauch‘s oeuvre in general. In the early 1990s he made many works in dark earthy tone. Different both opaque as well as transparent materials overlap and form dream-like mystic sequences, that contain both figurative as well as abstract motifs. The artist explains his perception of art as follows: "If painting shows itself as a striking and unsettling expression of a confused and strange artist personality, than the border between mere painting and image has been crossed and I am grateful for this constructive jolting of my habits. If the impression is deep, my interest in time of origin, social background and deeper intentions of the author is automatically reduced " (Rauch, quote after: Künstler. Kritisches Lexikon der Gegenwartskunst, Munich 2007, p. 14). As one of the internationally most successful contemporary artists, who had decisive influence on the "Neue Leipziger Schule", his works are in possession of , e.g. the Museum of Modern Art and the Guggenheim Museum in New York.

Neo Rauch‘s works are highly treasured on the art market. Additionally, his works in solo shows have attracted a great many visitors, for instance in 2007 in the Metropolitan Museum of Art in New York, in 2010 in "Begleiter", which was simultaneously shown in the Museum der Bildenden Künste in Leipzig and the Pinakothek der Moderne in Munich, or in 2011 in the Museum Frieder Burda in Baden-Baden. Additionally Neo Rauch‘s works are in renowned international museums and collections, for instance the Museum of Modern Art in New York, the Stedelijk Museum in Amsterdam or the Kunsthalle in Hamburg. [DB]