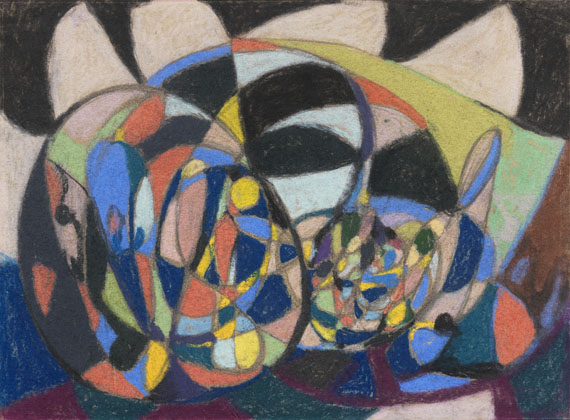 We are grateful to Dr. Alexander Klee, Vienna, for his kind support in cataloging this lot. This work will be included into the forthcoming catalog raisonné.

Adolf Hölzel was born the son of a book trader and lithographer in the Moravian town of Olmütz on 13 May 1853. He was raised to participate in his father's business when he was still very young. In 1868 he began an apprenticeship as a typesetter in Gotha and regularly took lessons in drawing and painting on the side. From 1872 to 1873 he attended the academy of Vienna as an extraordinary pupil; subsequently he completed a one-year military service as a volunteer and even considered a career as an officer after passing the officer's exam. When he finally decided in favor of painting, though against his father's will, Hölzel went to Munich in order to continue his art studies at the local academy. In 1888 he moved from Munich to Dachau, where he became the head of the artistic community "Neu-Dachau", the school for painters around Fritz von Uhde, which predominantly worked in the impressionistic style. In Dachau, Hölzel taught the future German Expressionist Emil Nolde for a short period of time. In 1906 Hölzel was called to the academy of Stuttgart; there he held a professor's chair for painting until 1918. The early stage of Hölzel's style was obliged to an impressionistic style, by way of which he gradually got to decorative black-and-white configurations, which used form and not color or duct to convey inner experiences. On this basis he developed non-representational, two-dimensional color-studies with spirals and circles penetrating each other. Hölzel also wrote theoretical papers, which had an effect on the next generation of artists: particularly Johannes Itten and Oskar Schlemmer, two future Bauhaus members, examined Hölzel's papers. At an exhibition in Stuttgart in 1917/18 he was presented to the public together with Johannes Itten, Oskar Schlemmer, Willi Baumeister and Ida Kerkovius under the title "Hölzel und sein Kreis". In the 1920s his series of pastels came into existence to which the artist mainly attended during his last ten years beside glass windows for sacral and secular architecture.

This work is a characteristic example of Hölzel's abstract color field the 1920s. The artist contrasts lucent colors with black and white fields and inweaves them to powerful-rhythmic compositions. Hölzel clearly defines the color fields and creates complementary and chiaroscuro contrasts, in the end creating a harmonious unity. The following words by the artist sum it up best: "Change one to two and two to one / and two to three and three to two / and altogether make it one / this will make for the picture's greatness. / Unfolding unknown affluence despite all simplicity." (Adolf Hölzel, Staatsgalerie Stuttgart, art theoretic estate, 3 NT, sheet 911, quoted after: Edith Neumann, "Und immer wieder rot, blau, gelb", in: ex. cat. "Adolf Hölzel, Wegbereiter der Abstraktion", Galerie Albstadt, 1999/2000, p. 57).

In 1934 Hölzel, one of the most important precursor of modern art, died at the age of 81 in Stuttgart [KH].