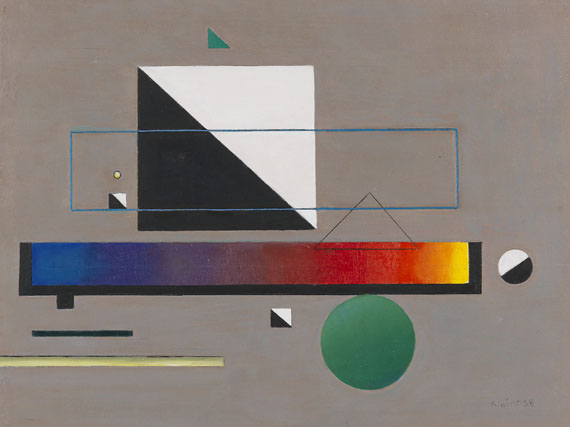 Boris Kleint painted this work while he was in exile in Luxemburg, where he had moved to in 1936. Before that the native Alsace had studied painting at the Berlin Academy of Arts under Johannes Itten. Between 1936 and 1942 he went on journeys to London and Paris, where he became acquainted with Walter Gropius, Kandinsky and Picasso. In 1946 he was called to the State School for Arts and Crafts in Saarbrücken and was appointed professor in 1954. Our painting originates from an early period characterized by constructive-concrete compositions of plainly geometric elements. The picture "Schwarz-weißes Quadrat, diagonal" lives on the fascinating contrast of light colors and achromatic colors, white, gray and black as well as on the interplay of line and surface. [KH].