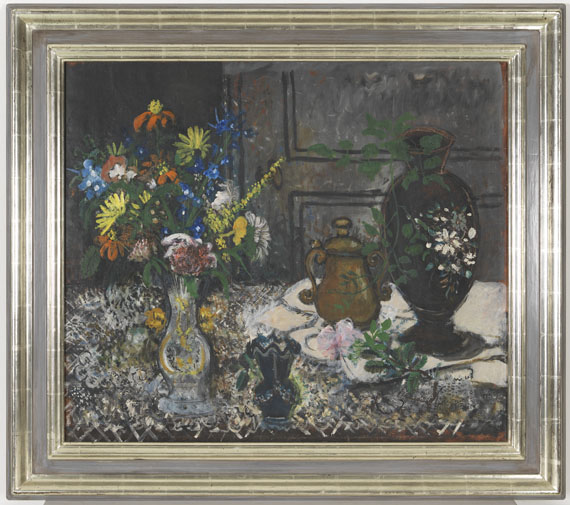 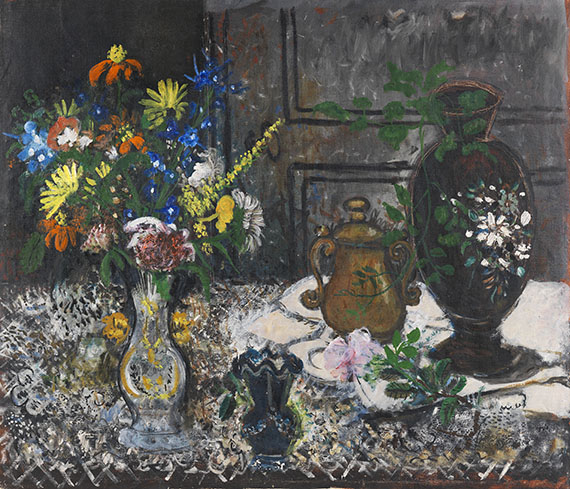 Max Peiffer Watenphuhl studies medicine at first, then law and finally does a doctorate as a lawyer about canon law in 1918. In Munich he gets to know Paul Klee and leaves one year later for the Bauhaus in Weimar where he comes together with Gropius, Itten, Feininger and Kandinsky. In 1924 Watenphul comes to Salzburg for the first time and works on the field of enamel painting at the studio of Maria Cyrenius. He feels so enthusiastic about the city that he keeps coming back until the middle of the sixties. Appointed to teach at the Folkwang-Schule in Essen he works there from 1927 - 1931.

Besides Italian landscapes it particularly were flower still lives that coined the oeuvre of paintings by Peiffer Watenphul in the 1930s and later. This opulent still life, an arrangement of flowers, tendrils and decorative ceramic, is particularly fascinating through the blossoms luminance, that splendidly unfolds its effect in front of the dark background. Another feature is the usage of scratchings, that, on the one hand, presumably served the mere purpose of organizing the composition, and on the other hand add a relief-like ornamental, almost plastic effect, as it is the case with the vase’s belly.

That year he receives the award of Rome and following this he spends a few months at the Deutsche Akademie Villa Massimo in Italy. In 1933 he decides to move to Italy completely where he meets German painters like Gilles, Levy and Purrmann on Ischia. Eight years later he returns to Krefeld where he works at the textile technical college. He continues this kind of teaching at the Kunstgewerbeschule in Salzburg from 1943 on. After his flight to Venice in 1946 he stays in this city until 1957 where a number of his well-known city pictures are created. In 1956 Watenphul moves to Rome. Peiffer Watenphul receives the following awards (just to name a few): Preis der Berliner Akademie der Künste (1932), Carnegie-Institute Award, Pittsburgh (1933). In 1965 he becomes member of the Bayerische Akademie der Wissenschaften und Künste. In 1976 the artist died in Rome. Recently his paintings were in the focus of exhibitions once more, e.g. in Salzburg (2001 and 2004), Essen (2005) and Munich (2007). [KP].