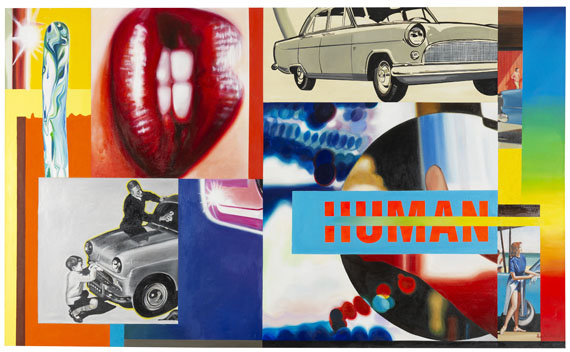 Martin Eder counts among the stars of the German art scene. Born in Augsburg in 1968, he enrolled at the Academy of Visual Arts In Nuremberg in 1993 after training as a communication designer, afterwards he studied at the Gesamthochschule Kassel and complete hi studies at the Dresden School for Fine Arts as master student of Eberhard Bosslet in 2001.

The large-sized painting "Neu" was made the year Eder transferred to Dresden. And yet, it is far from a typical student work: The artist shows great poise in placing the different levels of reality and imagery side by side, thus creating a firework of colors. In a style characteristic of this period of creation, the entire motif seems to have been inspired by the "American Way of Life" of the 1950s and 1960s, which, for instance, show the types of cars. Additionally, the sensual slightly opened red lips that fill an entire image field call clear reminiscence of Marylin Monroe’s pout. The kitschy aesthetic is skillfully interrupted by surreal insertions like the organically abstract flowing forms in the upper left part. Even though this work is at first sight clearly different from the artist’s later works on which he shows lasciviously reclined young women and plushy pets, human chasms, breaking the idyll and a certain play with both painter’s and observer’s fantasies run through the oeuvre like a red thread. In this context our painting is a fascinating example of Eder’s stringent profundity.

Eder made for furore while he was still a student with the media-spanning art project "Novaphorm", which he did tohether with Lisa Junghanss. The project comprised a club, medication packagingas well as a temporary hotel. Today his creation is still quite versatile, since 2003 he had been appearing under the pseudonym Richard Ruin as singer and guitar player of the band RUIN. Furnished with nzumerous scholarships, Martin Eder‘s works were soon greatly acknowledged both in German as well as abroad, his paintings were shown in solo shows in, e.g. the Kunstverein Potsdam (2003), the New Yorker Marianne Boesky Gallery (2006) and in the Staatlichen Kunstsammlungen Dresden (2009). [KP]