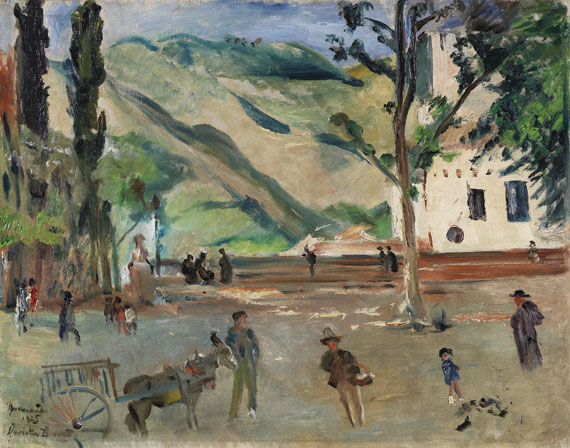 Charlotte Berend-Corinth was not only famous for being wife and model of the painter Lovis Corinth – as she had also created a comprehensive oeuvre of her own, which delivers proof of her masterly painting abilities. Born in Berlin in 1880, Charlotte Berend studied at the ‘Staatliche Kunstschule‘ and the Museum of Arts and Crafts in Berlin and then attended Lovis Corinth‘s "Malschule für Weiber" (Ladies Painting School). She then married her teacher and gave birth to two children, which, however, did not mean an end of her painting activities. Since 1906 Charlotte Berend-Corinth was a member of the Berlin Secession, in 1924 she was even on the jury. Her art was quite successful and shown at many exhibitions. This oil painting was made in context of a trip to Spain in 1925. In an easy stroke of the brush and in a mellow coloring it shows a contemplative impression in a southern airiness of the town Granada and a rolling mountain range in the back. The journey to Spain was the beginning of a number of trips which would become a great source of inspiration for the artist. In 1939 Charlotte Berend-Corinth went to the U.S.A. where she lived and worked in New York and California. In 1967 Charlotte Berend-Corinth died in New York. Today her works are in possession of many renowned museums and collections. [KP].