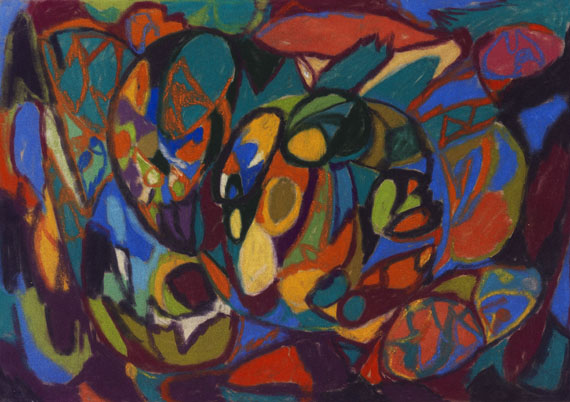 We are grateful to Dr. Alexander Klee, Vienna, for his kind expert advice.

Adolf Hölzel was born the son of a book trader and lithographer in the Moravian town of Ohlmütz on 13 May 1853. He was raised to participate in his father's business when he was still very young. In 1868 he began an apprenticeship as a typesetter in Gotha and regularly took lessons in drawing and painting on the side. From 1872 to 1873 he attended the academy of Vienna as an extraordinary pupil; subsequently he completed a one-year military service as a volunteer and even considered a career as an officer after passing the officer's exam. When he finally decided in favour of painting, though against his father's will, Hölzel went to Munich in order to continue his art studies at the local academy. In 1888 he moved from Munich to Dachau, where he became the head of the artistic community "Neu-Dachau", the school for painters around Fritz von Uhde, which predominantly worked in the impressionistic style. In Dachau, Hölzel taught the future German Expressionist Emil Nolde for a short period of time. In 1906 Hölzel was called to the academy of Stuttgart; there he held a professor's chair for painting until 1918. The early stage of Hölzel's style was obliged to an impressionistic style, by way of which he gradually got to decorative black-and-white configurations, which used form and not color or ductus to convey inner experiences. On this basis he developed non-representational, two-dimensional color-studies with spirals and circles penetrating each other. Hölzel also wrote theoretical papers, which had an effect on the next generation of artists: particularly Johannes Itten and Oskar Schlemmer, two future Bauhaus members, examined Hölzel's papers. At an exhibition in Stuttgart in 1917/18 he was presented to the public together with Johannes Itten, Oskar Schlemmer, Willi Baumeister and Ida Kerkovius under the title "Hölzel und sein Kreis". In the 1920s his series of pastels came into existence to which the artist mainly attended during his last ten years beside glass windows for sacral and secular architecture. In 1934 Hölzel, one of the most important precursor of modern art, died at the age of 81 in Stuttgart.

Just as it is the case with the other sheet from the same period offered in our auction, this pastel chalk drawing is another impressive example of Hölzel‘s pictorial language in the 1920s. The artist clearly worked out a self-contained composition, in which round and oval elements dominate. This principle captures both the big lines as well as the smaller embedded formations, which is why the overall composition emanates a very particular harmony. Additionally, Hölzel manages with great mastery to offer a wide range of associations despite the dominant abstract concept.

In 1934 Hölzel, one of the most important precursor of modern art, died at the age of 81 in Stuttgart. Over the past years the artist has been honored in numerous exhibitions, for instance in the Museum Moderner Kunst Stiftung Wörlen in Passau (2008) or the Kunstmuseum Stuttgart (2009). His works are in possession of many renowned collections, among them the Essen Folkwang Museum, the Sprengel Museum Hanover or the Bayerische Staatsgemäldesammlungen in Munich. [KP]