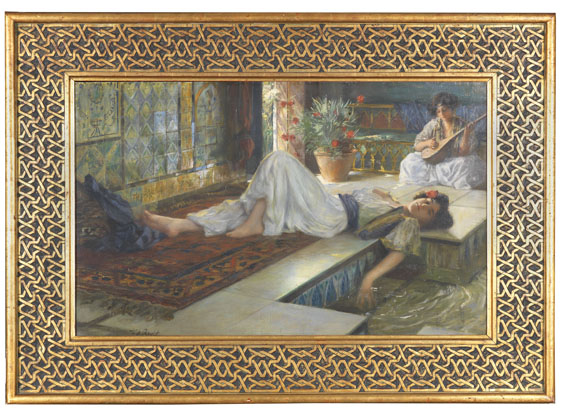 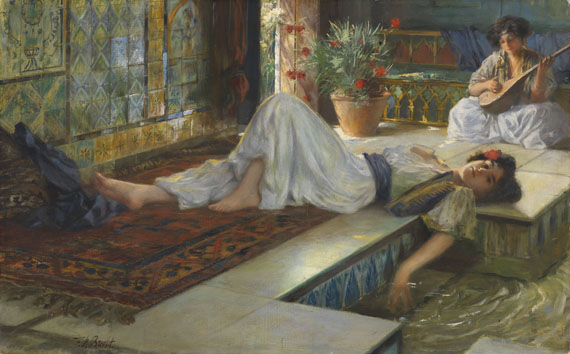 PROVENANCE: Acquired in 1932, ever since in Southern German possession.

The Leipzig native Ferdinand Max Bredt had learned the trade of a book dealer before he studied painting at the academies of Munich and Stuttgart, among others, under Wilhelm Lindenschmit. He rendered his impressions of numerous journeys through Turkey, Greece and Tunisia in his works, which made him a successful orient painter. His works were shown in Berlin, London, Paris and Chicago, his oriental motifs, nudes and fairy tale scenes were particularly popular. But he also showed an interest in oriental architecture: he build his studio and residence in Ruhpolding in Arabian style and contributed to the oriental design of a public bath in Stuttgart.

The "Muße der Odalisken" (Leisure of the Odalisques) shows a scene of two jolly young harem ladies, so-called odalisques, in a splendid room in a palace with oriental tiles, carpets and a shallow basin. Sunlight falls in through an opened door which leads into a garden, bathing the whole scene in a charming interplay of light and shade, which, at the same time, emanates an atmosphere of both a refreshing breeze and gentle warmth. One of the two women plays an oriental lute in the background, the Komuz, the other one, the painting’s main figure, reclines on the carpet, one hand in the water for refreshment, her eyes towards the observer. With great poise Bredt manages to add a seducing-sensuous notion to this seemingly innocent scene of the two chastely dressed ladies, simply by means of the reclined odalisque’s open look, allowing the observer to make her object of projection. [CB].

More Information
+
Sell
Get a free appraisal for a similar object!
+
Register for
Ferdinand Max Bredt
+
Buying from A-Z
+
Contact a specialist
Share