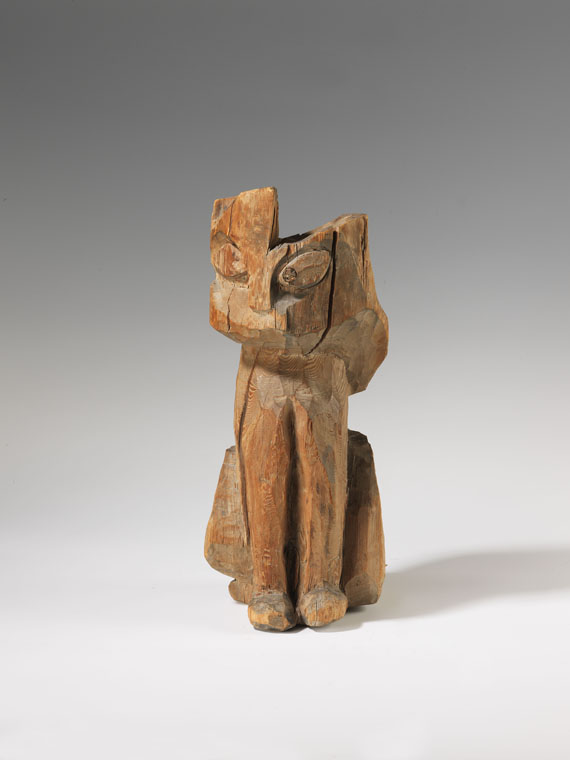 39
Ernst Ludwig Kirchner
Katze, 1920.
Wooden sculpture
Estimate:
€ 80,000 / $ 91,200
Sold:
€ 201,300 / $ 229.481
(incl. 22% surcharge)
Lot description
Katze. 1920.
Wooden sculpture.
Henze 1920/07. Height: 37 cm (14,5 in).
This sculpture made of larchwood comes from the collection of the renowned Swiss architect and sculptor Erwin Friedrich Baumann, who ws a close friend of Kirchner up until his death. According to Wolfgang Henze, this scuklpture is likely to be one of the front legs of the Adam- und Eva- Stuhl II (Adam and Eve chair II, Henze 1920/04), thought to be lost. Kirchner depicted this cat sculpture on his painting "Interieur mit Maler" from 1920 (cf. Gordon 627).
One of the extremely rare sculptures by Kirchner. This work is offered on the international auction market for the first time (source: Artnet.de). [KH].

Kirchner studied architecture in Dresden where he met and worked with Fritz Bleyl, Erich Heckel and Karl Schmidt-Rottluff. After finishing his studies, however, he opposed his father's wishes and decided to become a painter. The intense artistic and intellectual relationship between the four artists soon led to the formation of the artist group 'Die Brücke', which, according to Schmidt-Rottluff, wanted to "attract all revolutionary and restless forces". The artists began to work on the ‚Viertelstundenakte', drawings on nude models in the studio or in open nature. At first the group oriented itself to artists from Late Impressionism. The discovery of the Fauves, South Seas' art and van Gogh led the painters to Expressionism. Due to the encounter with Italian Futurist works, the group's painting style changed and became ‚tougher'. Kirchner studied the sculptures at the Völkerkundemuseum in Dresden, which influenced his own wood sculptures. In 1911 Kirchner moved to Berlin. Here Kirchner discovered new motifs - city and street scenes. He painted them in a simplified manner, with sharply contoured forms, expressive features and clashing colors. The city paintings became incunables of Expressionism and made Kirchner one of the most important German artists of the 20th century. The beginning of world war I and the following years were a turning point in his life. The war experiences and military service caused an existential angst and led to illness and long stays in sanatoriums. The more remarkable was his artistic production of that time. Works like the woodcut ‚Frauen am Potsdamer Platz' , the ‚Bilder zu Chamisso's Peter Schlemihl', the self-portraits and woodcut pictures from the sanatoriums, which are counted among the highlights of his œuvre, came into existence. In 1917 Kirchner settled in Frauenkirch near Davos. The city scenes were now replaced by mountain landscapes and scenes of rural life.

This larchwood sculpture comes from the collection of the acknowledged Swiss architect and sculptor Erwin Friedrich Baumann, who was a close friend of Kirchner up until his death. According to Wolfgang Henze, this sculpture presumably is the front feet of the lost Adam- and Evea-Chair II (Henze 1920/04), which is part of the painting “Interieur mit Maler" from 1920 (cf. Gordon 627). Henze emphasized the high artistic value of this plastic: “Even though ‘Katze‘ was made with a clearly intended use, as the indentation in upper right of the head shows, it is an independent work by Kirchner, especially the 'proportion of meaning' between head and body is quite obviously well realized and observable“ (Henze, Wolfgang: Die Plastik Ernst Ludwig Kirchners. Monography with catalog raisonné, Bern 2002, ´p. 313). Indeed, our "Katze" is a prototypical example of an expressionist plastic. Kirchner seems to have ‘peeled’ the sculpture from the wooden block, the cat’s body emerged from the wood of its own volition. The naturally coarse surface structure allows the observer to identify the process of creation, Kirchner arbitrarily left the traces of his carving knife visible. In doing so he manages to let the body appear soft and smooth, despite the rough form, eventually expressing the cat’s gracious character.
The plastic work is of great importance for Kirchner‘s oeuuvre. On the one hand, it was a medium of his creative powers, on the other hand, he used them to adorn his surroundings. Among the Brücke artists it was him and Erich Heckel who made a number of carved pieces of furniture and artisan objects. However, they were almost exclusively intended for private use, as decoration in homes and studios and were hardly shown in exhibitions. This may also be the reason why expressionist sculptures were scientifically approached at a later point only (the first comprehensive monography on Ernst Ludwig Kirchner‘s sculptures was published in 2002). Works like this are rarely found on the international auction market.

Around 1920 his painting style calmed down, his paintings had a carpet-like two dimensionality. Beside Kirchner also produced an extensive graphic work - wood cuts, lithographs and ink drawings. In 1923 Kirchner moved to the ‚Haus auf dem Wildboden' at the entrance of the Sertig Valley where he lived and worked until he committed suicide in 1938. 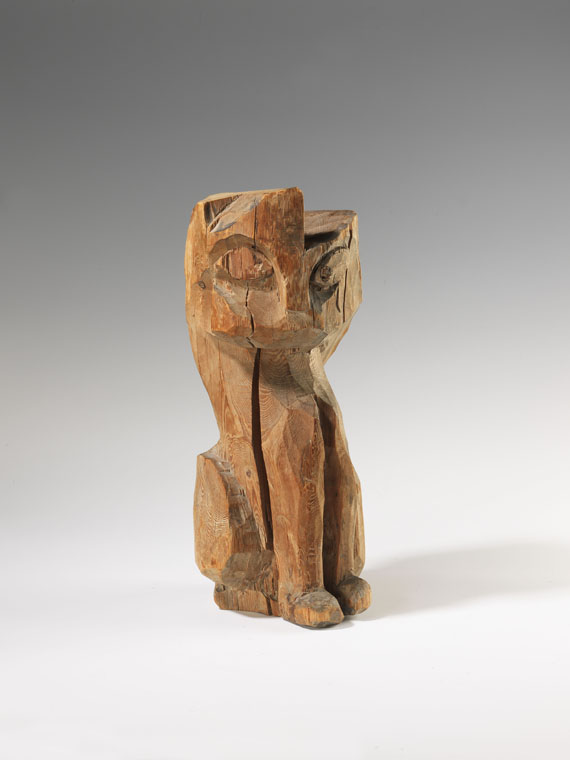