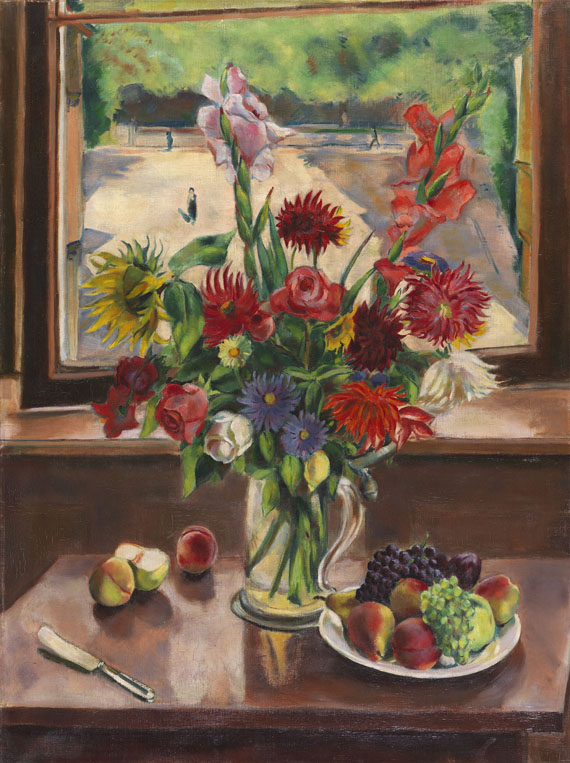 The German-Israeli artist Leo Kahn was born in Bruchsal on 15 August, 1894. Before he volunteered in World War I in Verdun as of 1914, he had attended the School of Arts and Crafts in Karlsruhe. As of 1920 he was master student of Albert Haueisen at the Academy of Fine Arts in Karlsruhe. During his studies in Berlin and sojourns in Holland and France, he made friends with many renowned contemporary artists over the following years, among others with Max Liebermann and André Derain. He received wide recognition for the paintings in the synagogue in Bruchsal, which he made between 1927 and 1928. Our atmospheric still life was made during Kahn‘s days at the Karlsruhe Academy. The opulent flower bouquet and the ripe fruits in lucent and strong colors in front of the half-way opened window looking on a sunny yard emanate the atmosphere of a warm day in late summer. The colorful painting is one of the few remaining works from Kahn‘s early period of creation in the 20s. Leo Kahn was defamed by the National Socialists and most of his works were destroyed during their reign. He was driven into immigration. In 1936 he left Ulm, where he had been living since 1925, and, together with his wife Elisabeth and their four children, he went to Palestine. In order to make a living he started a textile print factory, however, he never gave up painting. In 1950 his works were shown at the Biennale in Venice. Two years later the Tel-Aviv Museum of Art awarded him the Dizengoffprize. In 1981 the Museum of the city of Ulm showed a large Leo Kahn retrospective. In 1983, at the age of 89, the artist died in Ramat Gan. [KH].