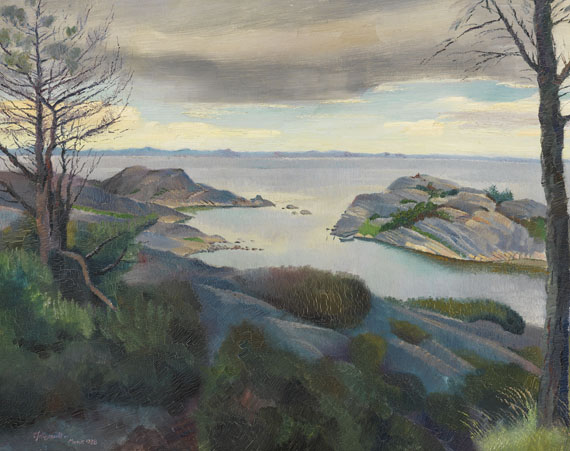 Since 1933 Felixmüller‘s living and working conditions had become worse due to the rule of the National Socialists in Germany. In 1934 he relocated from Dresden to Berlin, hoping to escape prosecution. Even though Felixmüller successfully participated in the spring exhibition of the ‘Verein Berliner Künstler‘ in 1937, he was publicly defamed after the Artist Association had fallen victim to the Nazi’s cultural politics. Some 151 works were confiscated in museums and seven of his early expressionist works were shown in propaganda show “Degenerate Art“. In these days of defamation, it was portrait commissions from abroad that enabled the artist to travel to Norway and England in 1938 and 1939. Together with his wife Londa, Felixmüller went onto a study and lecture trip to Norway in 1938 and visited Kristiansand, Stavanger, Bergen and Oslo, where he also made a number portraits and landscape paintings. In these works he captured the special atmosphere of Scandinavia with the atmospheric lights and cool colors. [KP/CB].