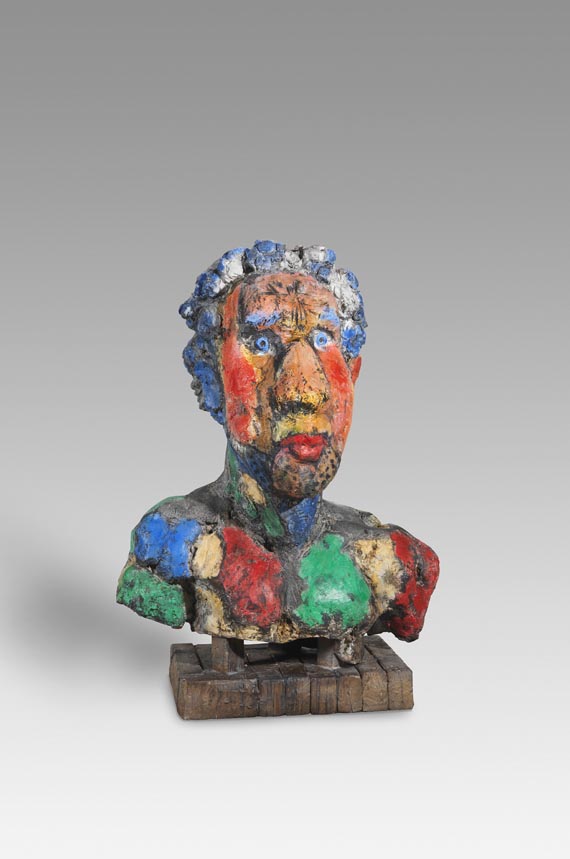 When he was seven years old, Markus Lüpertz came with his family to Germany. From 1956 to 1963 he studied in the class of Laurens Goosens at the art school in Krefeld and at the Academy of Arts in Düsseldorf. In 1962 Lüpertz moved to West Berlin, where he founded the self-help gallery 'Großgörschen 35' with Bernd Koberling and Karl Horst Hödicke. Lüpertz started to paint pictures with simple representational contents against all contemporary tendencies towards abstraction. In a manifesto of 1966, he titled his emphatically expressive pictures 'dithyrambische Malerei' - after an ancient Greek ritual song for the fertility god Dionysos. In the years 1969 until 1977 he created the 'German motives' - picture compositions in the form of still lives that present symbolic objects of the past such as steel helmets, shovels or flags in monstrous dimensions and demand to come to terms with German history. In 1970 Lüpertz received the prize of the Villa Romana and spent the year of his scholarship in Florence. In 1976 he accepted a chair at the academy in Karlsruhe. Since 1977 he took up abstract tendencies of the 1950s in his 'Stil-Bildern'. In the same year the Kunsthalle in Hamburg presented a first survey of his oeuvre, followed by the Kunsthalle in Bern and the Stedelijk Van Abbe museum in Eindhoven. He gave up the increasing abstraction in his pictures in favor of a new representational and three-dimensional style, in which he applied art-historical quotations and style elements. Lüpertz uses all printing techniques, works as a poet and, since 1980, as a sculptor and stage designer. In 1982 he took part at the documenta VII in Kassel. In 1986 he was offered a chair at the Academy of Arts in Düsseldorf, which he heads as principal since 1988. Lüpertz received the Lovis-Corinth prize of the artist guild Esslingen in 1990. Important individual exhibitions were dedicated to his oeuvre. A work show arranged according to subject was organized at the Art Collection North-Rhine-Westphalia in Düsseldorf in 1996 and a retrospective exhibition at the Kunsthalle of the Hypo-Culture Foundation in Munich in 1997, which was later presented in Wuppertal and Barmen. In 1997/98 his works were represented at the exhibition "Deutschlandbilder: Kunst aus einem geteilten Land" in the Martin-Gropius building in Berlin.

It "[..] becomes obvious that Lüpertz‘ sculpting became more and more focused on the human figure over the years, that to him it is once more about the ‘great figure‘. With regards to meaning, on which he has put an increased emphasis, his figures are affected in a way that can not be wiped away, but affected in a way that outlasts changes and alterations. Lüpertz' work starts at its profile depth with the goal to wrench a yet undiscovered moment from the figure and to realize it in the work." (Armin Zweite, in: Markus Lüpertz. Gemälde - Skulpturen, ex. cat. Kunstsammlung Nordrhein-Westfalen, Düsseldorf 1996, p. 120). The monumental bust "Beethoven" does not depict the composer with the well known facial features. Lüpertz rather works out the great artist’s character. In doing so he creates an individual combination the bronze cast with a version in colors, the painter’s and the sculptor’s work.

Lüpertz lives and works in Berlin, Düsseldorf and Karlsruhe. [CB]. 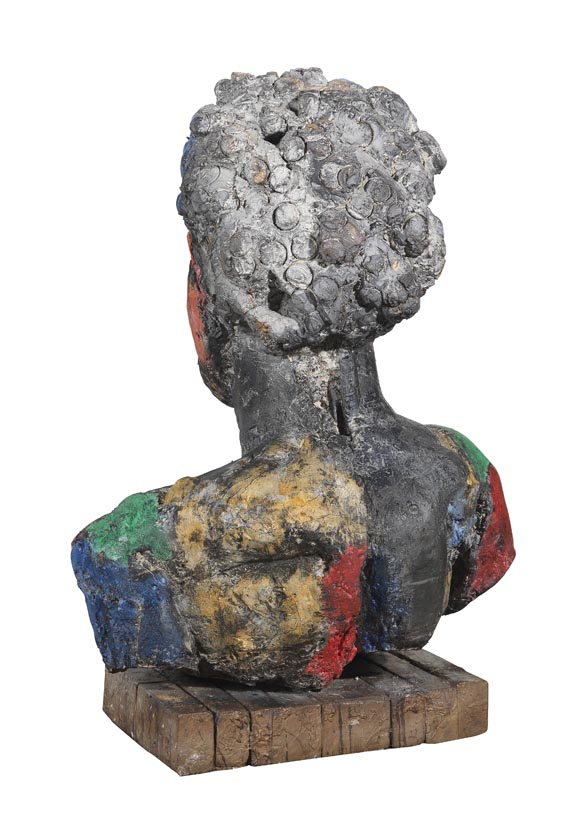