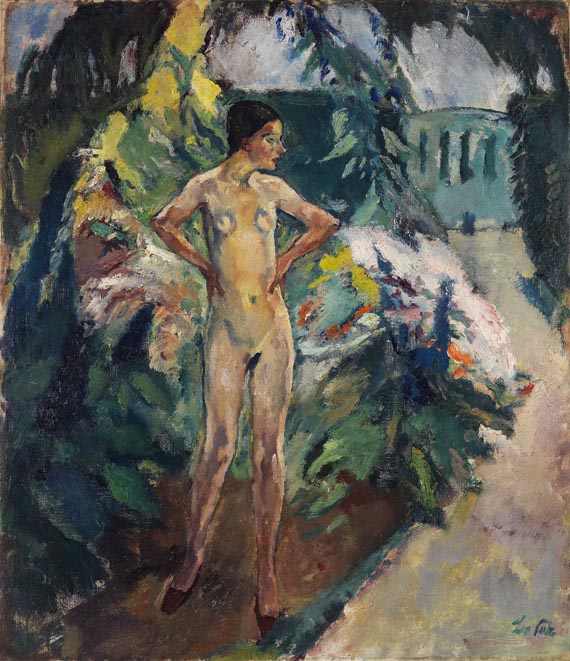 The authenticity of this work has kindly been confirmed orally by Leo Putz, estate Prof. Leo Putz, Gauting.

Against his fathers wish Putz moved to Munich at the age of 16, to take first drawing lessons under his stepbrother Prof. Robert Poetzelberger. He then studied fine arts first at the Akademie in Munich and then, from 1891 to 1892, at the Académie Julian in Paris under Adolphe Bouguereau and Benjamin Constant. After returning from Paris, Putz attended the studio class of the genre painter Paul Höcker. The Munich Secession was founded in 1892 and Putz frequently exhibited at the annual exhibition. A few years later, in 1899, Höcker's studio class founded the artist group "Scholle". Putz was one of its founding members. The group confronted the predominant academic style and Historicism with a new, temperamental painting style, which was influenced by Wilhelm Trübner. The central subject was the depiction of people, mainly women. Putz and his family moved to Gauting in Bavaria in 1923, two years later he was honoured with an honorary membership of the Bayerische Akademie der Schönen Künste (Bavarian Academy of Fine Arts).

In the 1920s, Leo Putz radically changed his style of painting to one in which casual handling oriented to German Late Impressionism was the dominant quality. Putz did, however, remain true to his motifs. They were still young women, now often in nude studies, painted in the reassuringly domestic setting of his villa in Gauting and the surrounding garden. Light contrasts became a device of choice. A fascination with varying light effects often induced the artist to paint the same motif more than once. Thematically Putz was not entering on uncharted territory; however, substantial changes to his signature are discernible. What had been a turbulent, strongly gestural application of color became more relaxed without, however, losing anything of its original attractiveness. Unlike earlier works by Putz the paintings he did in the 1920s are notable for an air of spontaneity, a light touch attesting to maturity and consummate mastery of a generous palette.

In 1929 Putz travelled to São Paulo, his first trip overseas. He and his family spent the following years in South America, travelling to Buenos Aires, Argentina and to the jungle in Bahia. In 1933 Putz once again returned to Gauting with his family. While he was honoured with a large exhibition at the Künstlerverein (Artist Society), Putz still felt the need to flee from the National Socialists as they prohibited him to continue painting in 1937 and dissolved the Secession and all artist groups in Munich in 1938. Leo Putz died on 21 July 1940 in his exile in Meran. He is buried in Gauting. [KD].