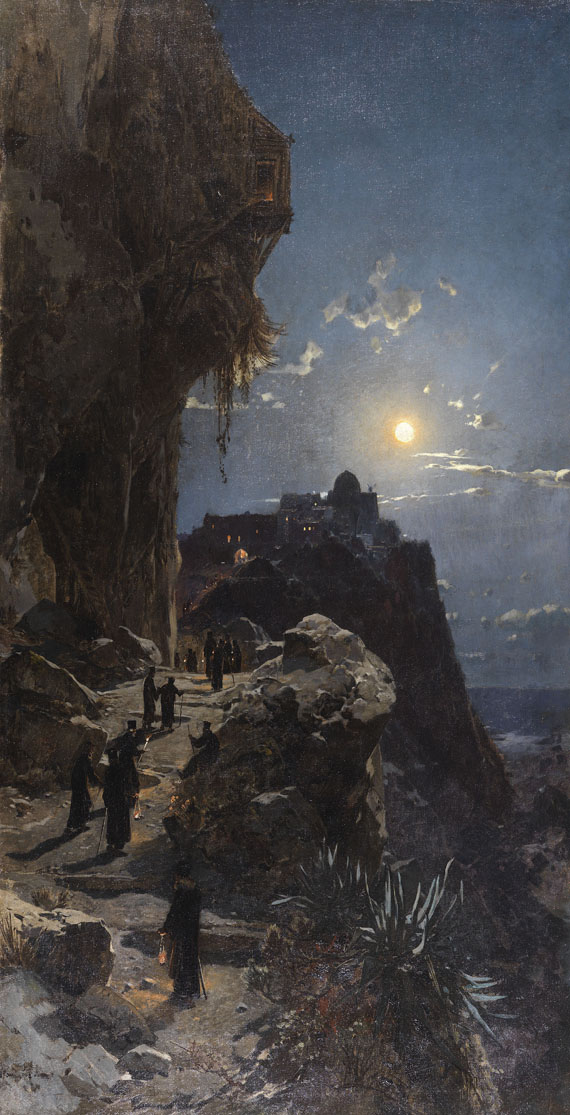 Hermann Corrodi was born son of the Swiss painter Salomon Corrodi in Frascati south of Rome in 1844. Together with his two years younger brother Arnold he received his first training in art from his father, in 1860 the two brothers went to Geneva, where they studied in the studio of Alexandre Calame. As of 1866 Corrodi studied at the Accademia di San Luca in Rome and joined the local German artist association. In 1872 he and his brother traveled to Paris, London and to the world exhibition in Munich, in 1873 they went on to Vienna. Extensive journeys to Constantinople, Syria, Egypt and Montenegro followed. From that point on his art, which had previously been dominated by views of Rome, was coined by oriental landscapes. Corrodi spent several summers in German spas, such as Baden-Baden and Bad Homburg, where he made contact with the German and the English imperial and royal family respectively. He was member and fopr some time director of numerous artist associations. In 1905 Hermann Corrodi died in Rome.

Corrodi’s many imaginative views, his creative powers seem to have been inexhaustible, are often characterized by an unusual format, as well as by surprising, at times dramatic effects of lighting. For the painting “Nächtlicher Aufstieg am Berge Athos“ (Nocturnal Ascension of Mount Athos) he chose a strong portrait format and thus masterly underlines the impressive precipice on the Greek peninsula and orthodox monk republic Athos.
Several monks are on a pilgrimage over a rocky path leading to a monastery built close to the steep coast. Corrodi manages to include the observer, who seems to stand on the same path as the monks, taken into the image from the lower margin. A wooden cells clings to the rock further up, another monk is descending to the path from up there over a dizzying boardwalk. Corrodi bathed the whole scene in pale full moon light, adding an enchanting silvery shine to the thin clouds, the steep rugged rocks and the leaves of the Agave in the foreground, which contrasts the torches‘ warm light shining upon the men‘s faces , as well as the monastery’s candlelit windows. The pilgrims (and the observer) yearn to reach the welcoming light after the troublesome ascension.
As it was Corrodi‘s usual habit, he also painted this motif several times. Next to this work a larger version (ca. 2,30 x 1,30m) is also known. It varies in just a few small details. This version was successfully auctioned by the auction house Finearte in Rome on 31 May, 2006. [CB].