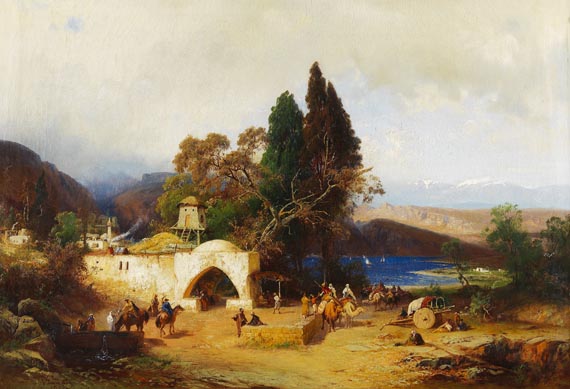 Paul von Franken, born in Oberbachem near Bonn in 1818, attended the elementary and preparatory courses at the Düsseldorf Art Academy for just one year for lack of financial means. From 1842 to 1844 he studied in Brussels and Antwerp. Up until 1849 he was living in Dresden where he met his later wife, the portray painter Helene Köber. He later returned to Düsseldorf. In 1852 the couple moved to Helene’s hometown Mitau in Latvia, where the artist executed his first large-sized landscape paintings. In Riga these works were on display in successful exhibitions. The following year the couple traveled to Tibilisi with stops in Saint Petersburg and Moscow. From there they went on several stints to the Caucasus Mountains. The sketches of landscapes and people he made there would be a source of motifs for Franken up until the end of his life. The couple broke up in 1860, Franken returned to Bad Godesberg and Düsseldorf. Over the following years he went on journeys to Luxemburg, Paris and Italy. In his paintings he worked up the newly gained impressions, however, time and again he resorted to Caucasian motifs.

As of 1862 Franken belonged to the renowned Düsseldorf artist association “Malkasten“ (Paint-Box), where he became established as the “Painter of the Caucasus“. He then increased his focus on landscape paintings, after his early work had been dominated by genre scenes and portraits. “Franken‘s works are of a high artistic quality, they are characterized by a duct that resembles that of the old Dutch Masters, a vivid, mostly clear and light at times strong coloring., Additionally, their atmosphere is composed of subtle illustrations of light and weather, as well as strikingly staged close and long range effects.“ (Translation of quote from Carsten Roth, AKL vol. 44)

Impaired by a stroke, Paul von Franken was ill the last years of his life and did not produce a great deal of artworks. He died in 1884. [CB]