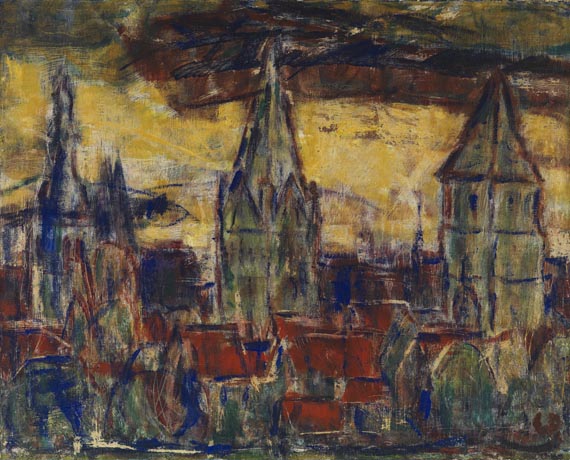 Accompanied by a confirmation of authenticity issued by Prof. Dr. Paul Vogt, Essen, dated 21 August 2006. Vogt honored the work as one of the artistically most outstanding works by the artist on the topic "Soest", which, on contrast to other works from these days, is particularly striking in terms of its coloring.

Christian Rohlfs was born in Niendorf in Holstein on 22 December 1849. During a two-year sickbed confinement from 1864-1866 Rohlfs was nursed by a doctor called Stolle, who discovered and supported the painting talent of the boy. At this time, the first drawings came into being. Upon Theodor Storm's suggestion and recommendation, Rohlfs went to Berlin and began his studies of painting at the Grand Ducal Academy in Weimar in 1870. A leg condition aggravated so badly during the following years that one of his legs was amputated in 1873. His works found approval by the Großherzog von Sachsen-Weimar [Grand Duke of Saxony-Weimar], who supported him for many years. From 1888 on, an independent stylistic development in parallel to the school of Barbizon and to French Impressionism can be recognized. Through Henry van de Velde Rohlfs got acquainted with the founder of the Folkwang Museum, Karl Ernst Osthaus in Hagen/ Westphalia. In 1901 Rohlfs moved there to run a painting school according to plans by Osthaus - which failed, however. During a summer stay in Soest in 1905, he got acquainted with Emil Nolde. Rohlfs' own tendency of expressive composition corresponded to the beginning Expressionism of the 'Brücke', to which early exhibitions at the Folkwang-museum attended. After his years of study at the academy, Rohlfs' work was formed for twenty years by Impressionism, but at the age of sixty, he found a late expressionistic style. Favoring tempera on canvas and paper, he also created watercolors and prints.

The painting "Soest", made in 1916, is a rare document from the collection of Walter Kaesbach, which is lost to a great extent. It is an outstanding example for Rohlfs‘ mature expressionist period. In those days the painter sought the immaterial, he broke up the forms in translucent worlds of light and colors of an immense atmospheric density that he captured in rhythmical-spirited strokes of the brush. In order to increase this effect, Rohlfs additionally processed the surface in "Soest" with the handle of the brush. He illuminates these hatchures with thinned tempera. In an opening speech of an exhibition in 1922, which also contained this painting, he said about this artistic effect: "Just as in a crystal, the light refracts in the artist’s eye, an explosion of colors in front of the objects [..]. The artist paints the medium of the atmosphere in his reflections, not merely the things themselves." Our work counts among the most important "Soest Pictures ".Time and again Rohlfs painted the town where he spent the summer months of the years 1904 to 1906 and where he became a close friend of Emil Nolde just from his memory. In the harrowing days of World War I these memories of Soest put forth deeply spiritual paintings which make for the highlights of his oeuvre. [ATh].