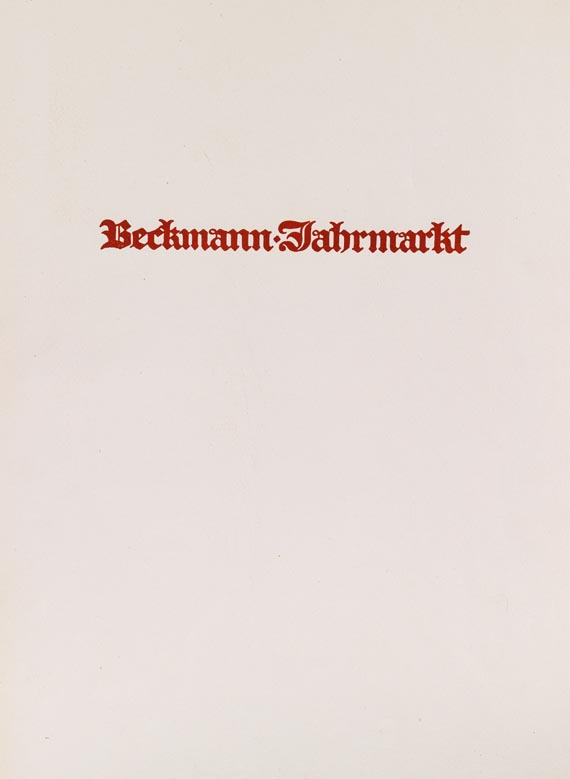 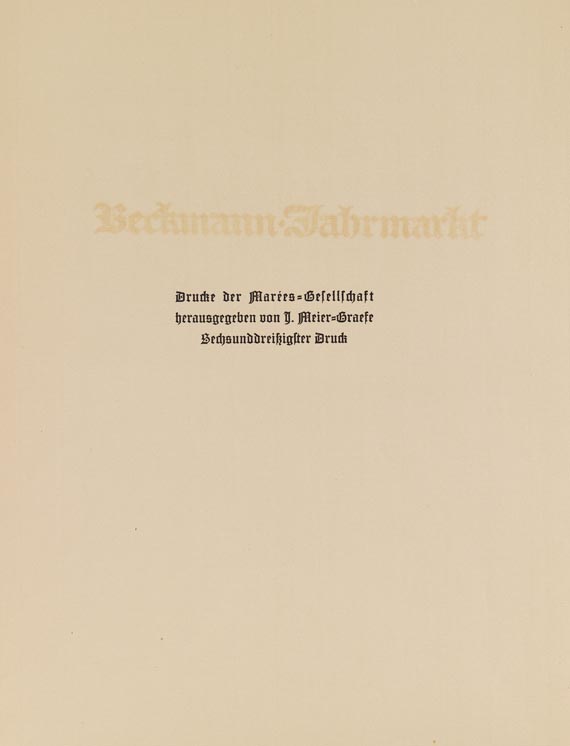 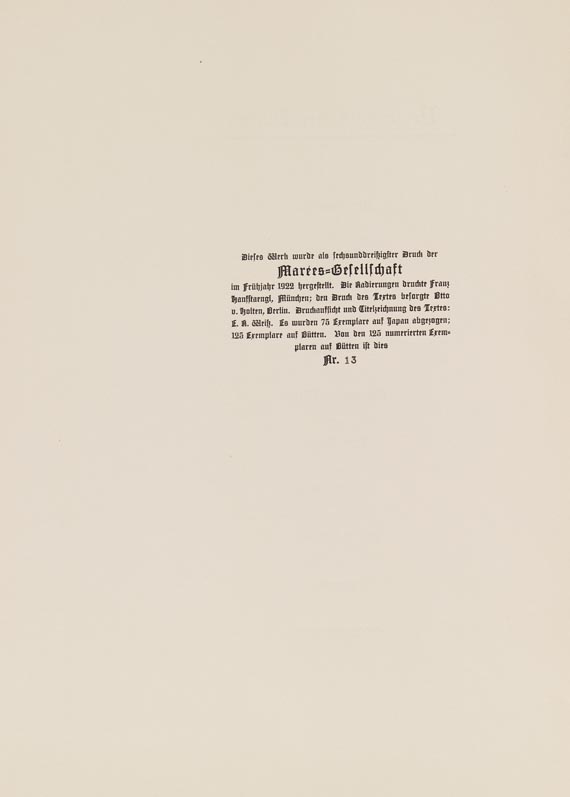 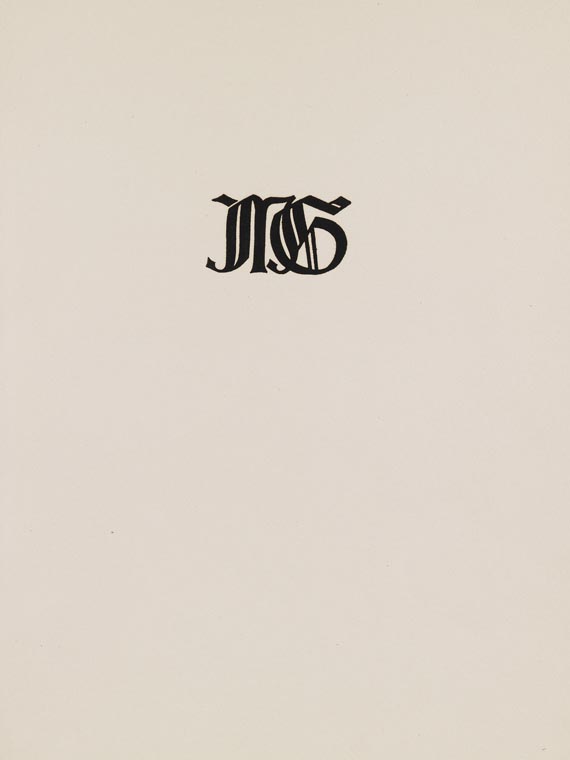 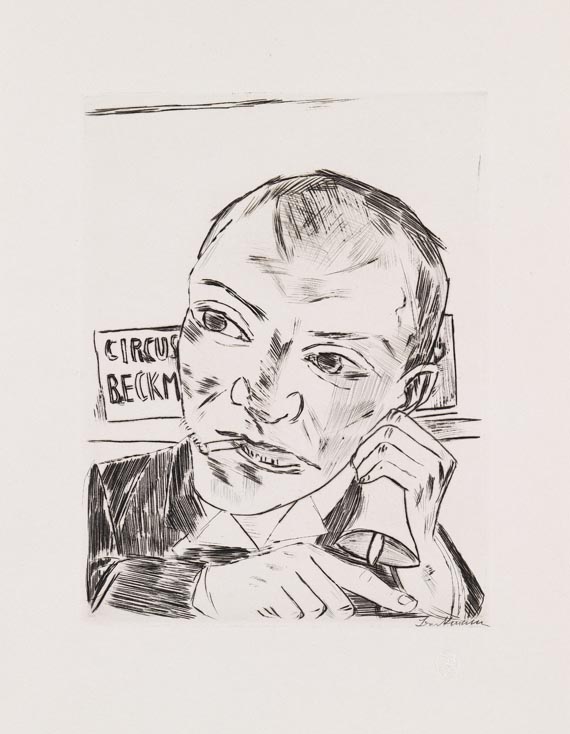 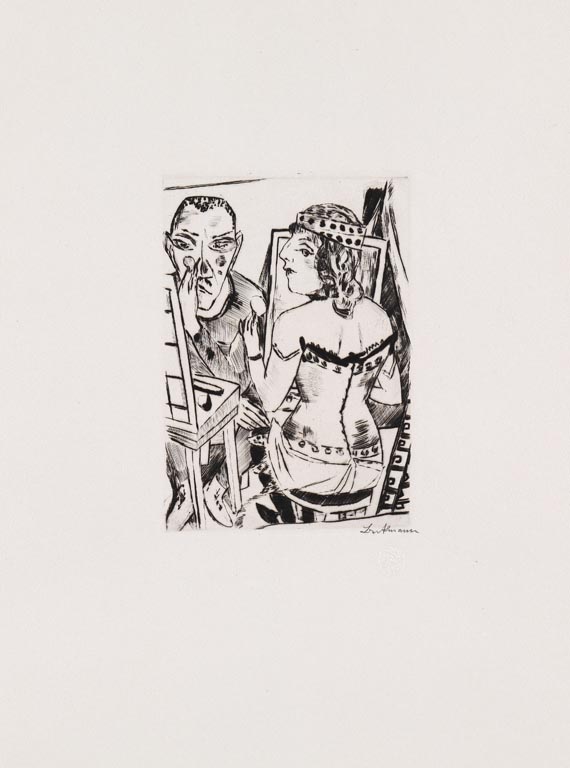 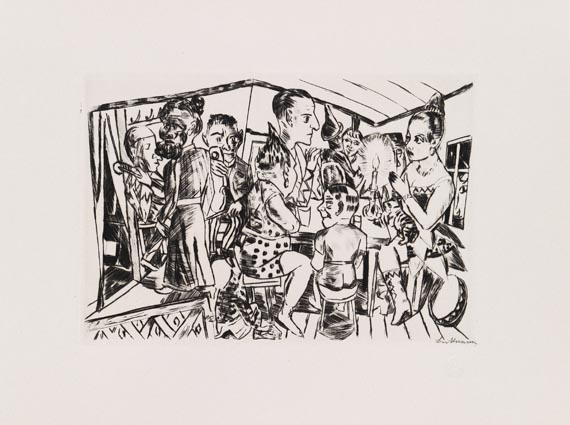 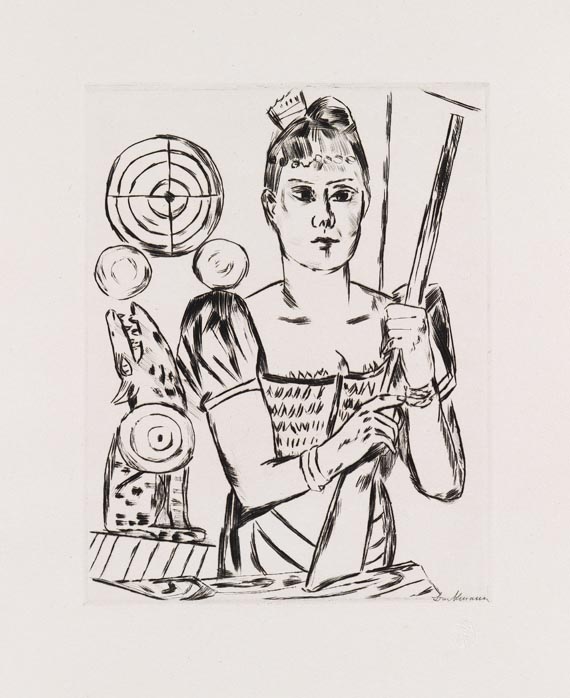 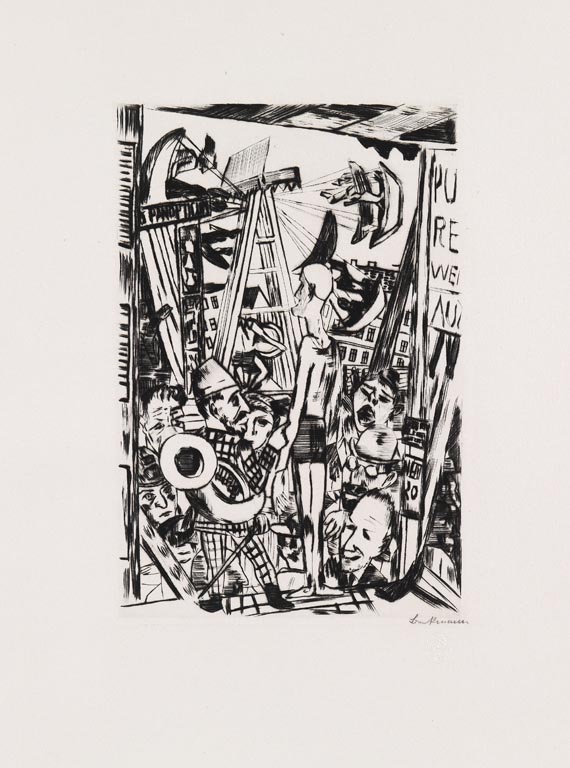 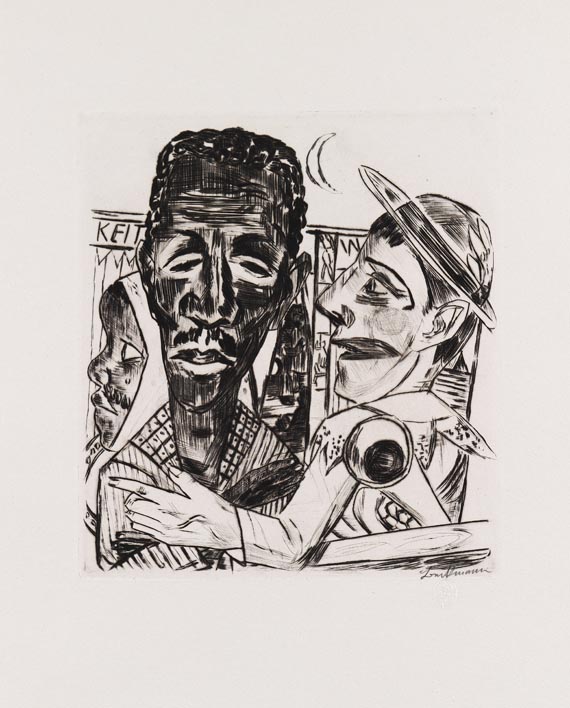 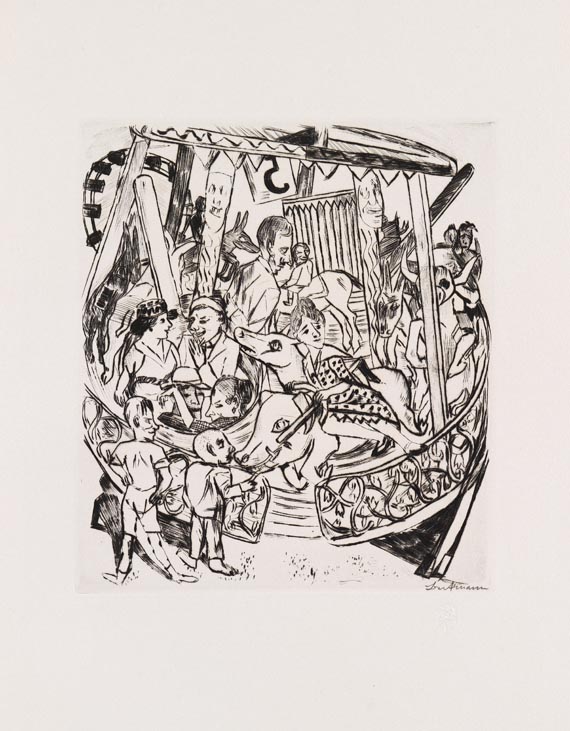 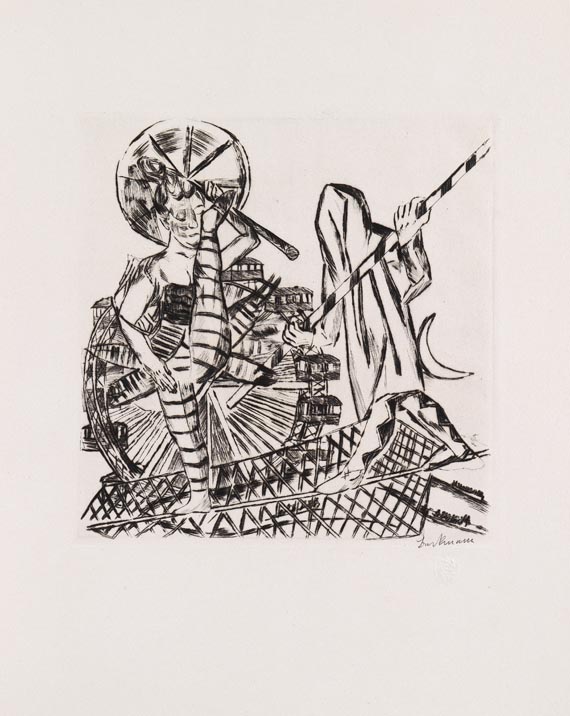 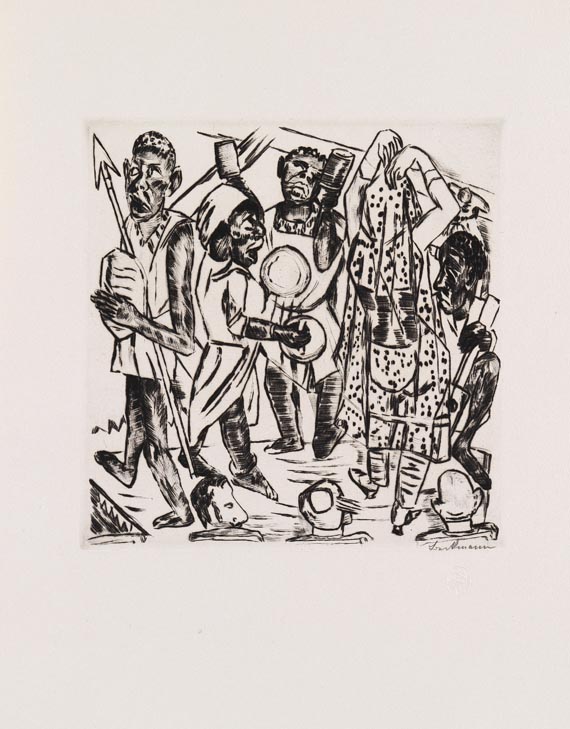 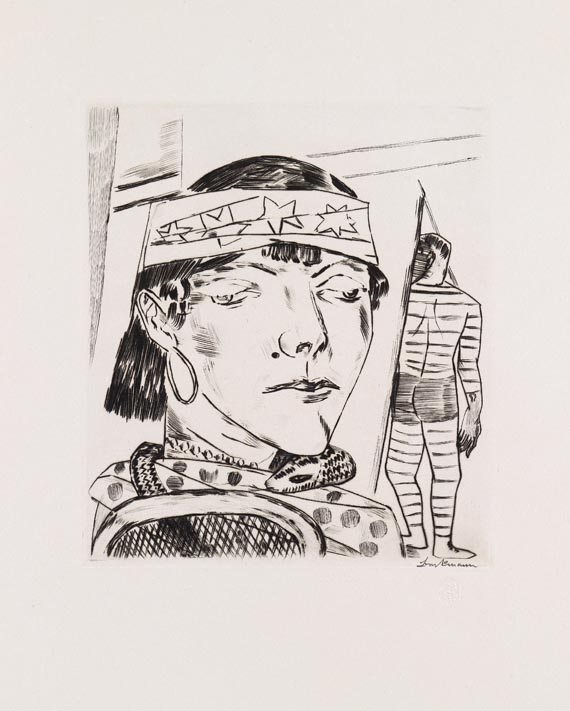 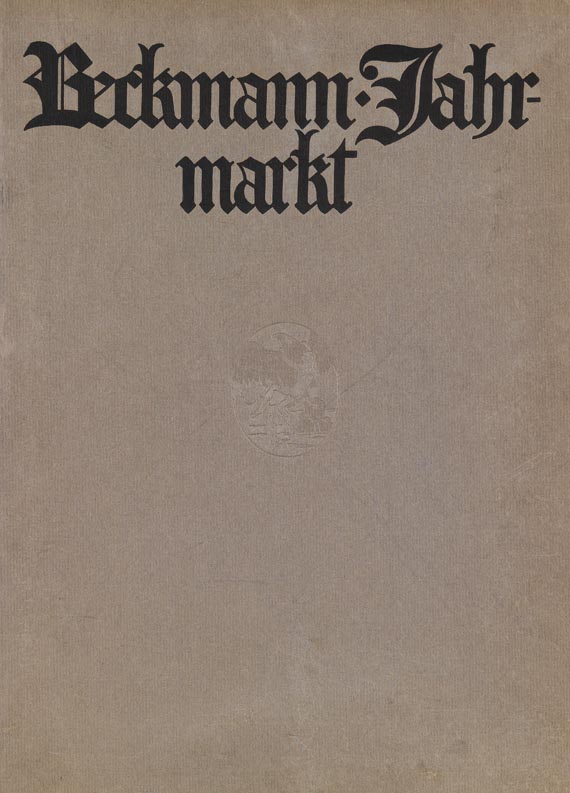 EXHIBITION: An exhibition on the series of prints "Jahrmarkt" by Max Beckmann took place in the Kunstmuseum Bern from 4 April - 25 June 2006 (no catalog). Another copy was on display.

In spite of his family's opposition, Beckmann managed to get their permission to become a painter after finishing school. He went to the Großherzogliche Kunstschule in Weimar from 1900 to 1903 where he studied mainly under the Norwegian landscape painter Carl Frithjof Smith. After his graduation and several trips to Paris, Geneva and Florence Beckmann settled in Berlin in 1907 where he joined the 'Berliner Sezession'. At the outbreak of the First World War Beckmann volunteered and served in East Prussia and Flanders. Discharged in 1915, Beckmann moved to Frankfurt am Main where he taught at the Städelschule until 1933. In terms of style his early paintings and graphic works are still under the influence of German Impressionism. Towards the end of the 1910s and accordingly following the atrocities of World War I, which Beckmann experienced as an ambulance man and worked up in numerous sketches, he attained a clarity of form and expression that emphasized the expressionist pictorial language.

These edgy forms and expressive gestures, which were to become the artist’s trademark, were brought to perfection by Beckmann in the early 1920s, particularly in his graphic works. The series of prints "Jahrmarkt" is a masterly document of this mature style and counts among the most renowned series of prints of Expressionism. Artists and showmen with their masks and costumes are the protagonists in Beckmann‘s ‘Theatrum Mundi‘. He portraits himself as a seer and bell man of this cabinet of curiosities. Hofmaier points out that among those depicted many friends and acquaintances of the artist can be found.
Beckmann chose different plate formats for this unusual series of prints. On 1 June, 1921 the artist wrote in a letter to the publisher Reinhard Piper: "Today the copper plates have arrived. I am looking forward to travelling from one copper plate to the next. I will complete some of them in Austria where I would like to take a look at the Prater near Vienna ". A little later he wrote to I.B. Neumann, who is shown as bell man with Fez on sheet 5: "Here [Graz] I am, taking turns idling and etching .. I feel the 'Jahrmarkt' is going to be quite amusing" (transl. Quote after James Hofmaier, Max Beckmann. Catalogue raisonné of his Prints, Bern 1990, p. 497).

With the success of the National Socialists the artist was increasingly defamed and finally dismissed from his teaching post. His works were removed from public collections in Germany. Political pressure forced him to emigrate to Holland in 1937. Here he was also restricted by the political situation, however, and an invitation to Saint Louis as a guest professor in 1947 was a welcome occasion to emigrate to the USA. This post at the Washington University School of Fine Arts was followed by teaching posts at the University of Colorado in Boulder in 1949, the Brooklyn Museum Art School in New York and Mills College in Oakland, California in the summer of 1950. Max Beckman died on 27 December 1950 in New York. He is remembered as one of the most important representatives of German Expressionism. [JS].