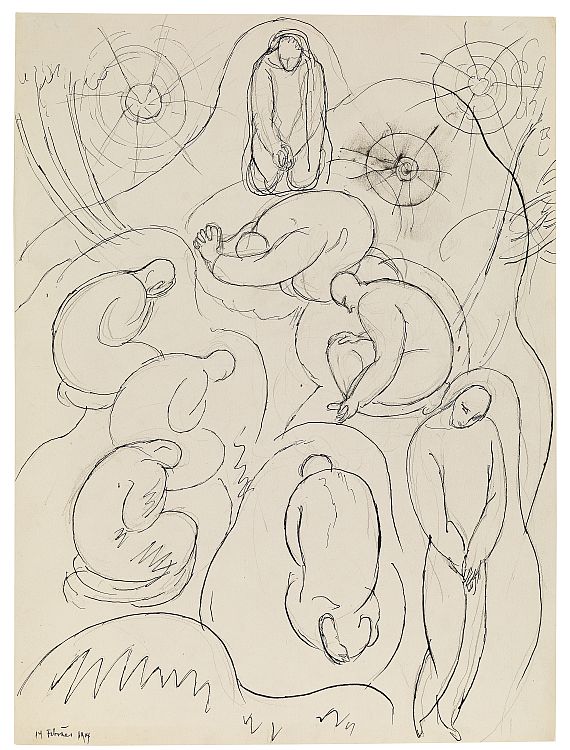 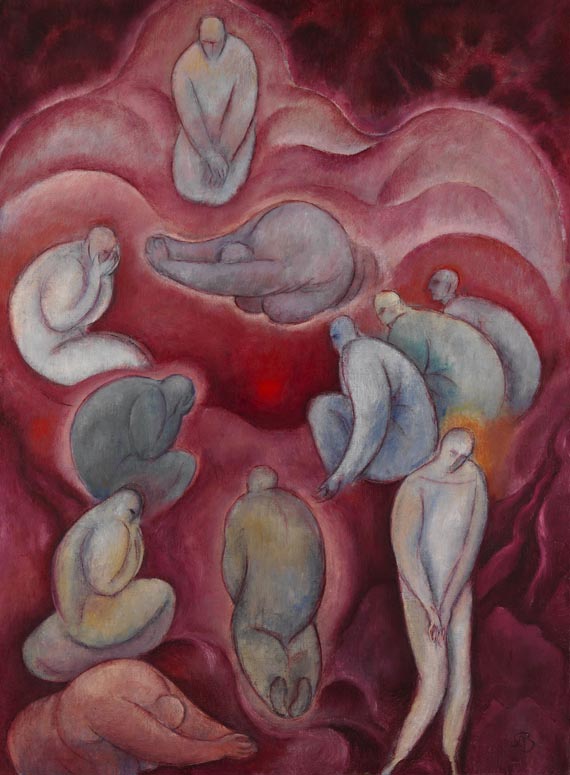 Albert Bloch was born the son of Bohemian immigrants in St. Louis in 1882. At first he attended the St. Louis School of Fine Arts and worked for newspapers as an illustrator. His fruitful long term co-operation with William Marion Reedy, publisher of the newspaper "The Mirror", began in 1905. Bloch made countless caricatures on his behalf, in which he implemented elements of Art Deco. With the support of Reedy, Bloch went to Europe in 1908 and settled in Munich, from where he did several journeys to Paris, London, Vienna, Berlin and Ancona. He studied the old masters in the biggest European museums and made friends with Kandinsky and Franz Marc. Bloch was invited to both exhibitions of the "Blauer Reiter" and met Herwarth Walden. This encounter led to a series of exhibitions, e.g. at the international art exhibition of the "Sonderbund" in Cologne, a one-man show at Herwarth Walden's gallery "Der Sturm", an exhibition together with Paul Klee and the participation in the International Fall Salon in Berlin and with Hans Goltz in Munich. Bloch preferred motifs were landscape- and city scenes, themes from the circus and subjects of the Commedia dell'Arte. The influence of Kandinsky becomes obvious in many of his landscape paintings. A number of works from between 1912 ands 1918 show notions of an Cubist-Orphist style.

In an article for "Albert Bloch. An American Blue Rider" Annegret Hoberg points to Bloch‘s unusual mixture of religious themes with themes from the world of clowns and the circus. And indeed, figures in this painting could be both participants in a religious action as well as actors in a symbolist theater performance. However, the arrangement of figures, whose composition Albert Bloch obviously borrowed from Italian Renaissance, does not allow for any other interpretation than a religious one. The figures androgynous appearance with their uniform clothing is, according to quotes from the days of the painting’s origin (A.J. Eddy), and their neutral effect on the observer, can be seen as representatives of a suffering humanity. Even though the picture’s composition with the towering god in center is in line with a Christain canon, Bloch and his interpretation of the longing for salvation must be seen in a more universal context. The background in rose with the central figure surrounded by lotus leaf-like forms alone makes for East Asian associations. They replace the suns, which were hinted at in the preliminary drawing and surrounding the highest being. (Cf. Albert Bloch. An American Blue Rider, published by Annegret Hoberg and Henry Adams, Munich/New York 1997, pp. 33f.).

Bloch left Europe in 1921 and returned to the United States. At first he taught at the Academy of Fine Arts in Chicago for a year and then became head of the Department of Drawing and Painting at the Kansas University in Lawrence. But Bloch also remained quite productive as an artist, however, he withdrew himself entirely from the art scene. His works made in the 1920s still show formal elements from his time in Europe, whereas a slight change of style towards a stronger concreteness was already underway. He became more and more detached from Cubism and Orphism. For some time his works were not as acknowledged as they would have deserved, which was largely due to his isolated lifestyle. Albert Bloch died in Lawrence/Kansas in 1961. [KD].

More Information
+
Sell
Get a free appraisal for a similar object!
+
Register for
Albert Bloch
+
Buying from A-Z
+
Contact a specialist
Share