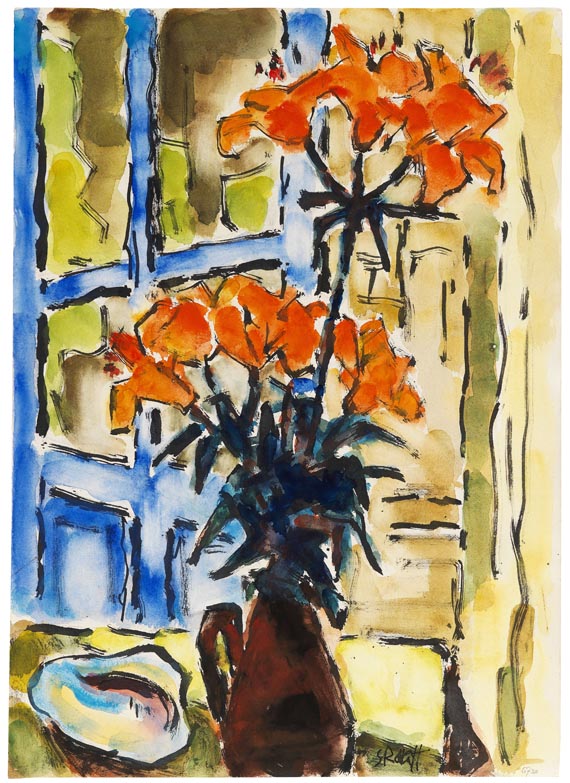 The painter, print-maker and sculptor Karl Schmidt was born at Rottluff near Chemnitz in 1884. His father was a miller. In 1905 he enrolled to study architecture at Dresden Technical University. The year he met Ernst Ludwig Kirchner, Erich Heckel and Fritz Bleyl there, he co-founded with them the group of artists known as 'Die Brücke'. Their first joint portfolio of prints appeared in 1906. He outdid his colleagues in insisting on pure primary colors and his Expressionist paintings were dominated by forceful handling of the medium to achieve intensity and brilliance. Until 1912 he often stayed for quite some time in the Dangastermoor near Varel in Oldenburg, where he found a wealth of motifs for his landscape paintings. After moving to Berlin in 1911, he addressed himself to problems of form, developing an increasingly reductive geometric formal language, a development that was interrupted by the outbreak of war. While serving on the Eastern Front, he did a cycle of religious woodcuts in which he tried to come to terms with the horrors of war. It is regarded as his graphic masterpiece. In 1918 he returned to Berlin. During the 1920s he reverted to the work rhythm of travelling to paint during the summers and working in his studio during the winters. Stays in Pomerania, at Lake Leba in Ticino and in the Taunus Mountains as well as a stint in Rome to study at the German Academy in the Villa Massimo (1930) inspired his mature still lifes and landscapes. In 1937 his work was declared degenerate at the notorious Munich exhibition of 'Degenerate Art'. By 1941 he was forbidden to paint and was expelled from the painters' guild. After the second world war he was appointed to a chair at the (West) Berlin ‘Hochschule für bildende Künste’. His late work links up, as far as motifs are concerned, with his Expressionist phase although his palette is by now more subtle and less intense. In 1956 this renewer of art, who had been an arch revolutionary in his youth, was awarded the highest (West) German distinction, the 'Pour le Mérite' order, and was honored as a classic.

The later watercolors by Karl Schmidt-Rottluff also deliver proof of his artistic power, all in all, his oeuvre is coined by a lasting vitality. In his flower illustrations Schmidt-Rottluff sees the flowers in connection with the surrounding space. Unlike Rohlfs and Nolde, who made the blossom the image’s object, Schmidt-Rottluff created a spatial unity. The strong stroke of the ink brush makes for the composition‘s graphic frame, which the almost unmixed colors illuminate. In these large-size watercolors Karl Schmidt-Rottluff expands the genre of the watercolor by a dense pictorial component. He sees great coherence, which he spontaneously executes with great poise and this is exactly what makes these sheets so exceptional, especially when seen in context of the times, when experimental Modernism did not.

The Brücke Museum, which he had endowed with a collection of his works, was inaugurated in 1967. Numerous retrospectives in the Federal Republic paid tribute to this artist, who, as art historians unanimously agree, was one of the most important German Expressionists. [KD].