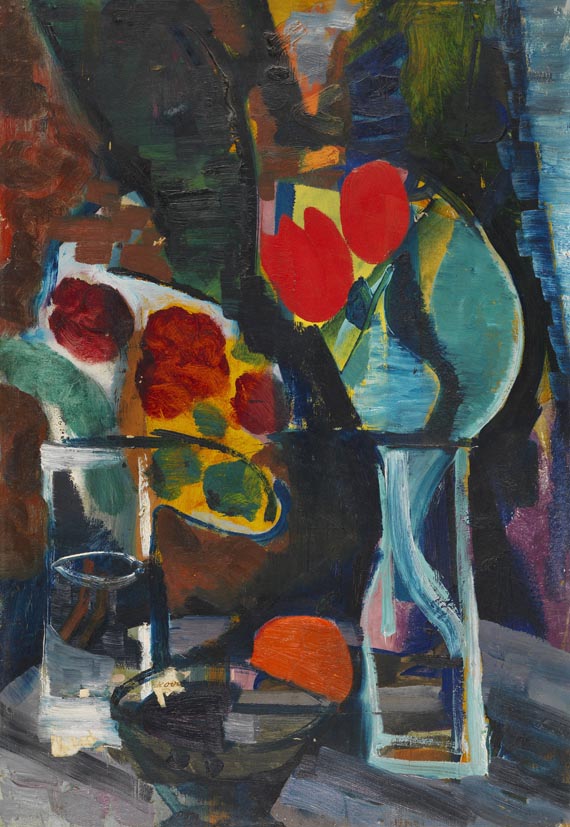 We are grateful to Dr. Ursula Reinhardt, Galerie Schurr, Stuttgart, for her kind expert advice.

Born as a Baltic German in Riga on 31 August 1879, Ida Kerkovius began her artistic training at the age of twenty at a private painting school in Riga. She was so fascinated by an exhibition of works by a pupil of Adolf Hölzel in 1902 that she decided to continue her studies in Dachau near Munich where Adolf Hölzel had opened a private painting school. Hölzel's color theory, as well as his doctrine of the 'Primat der Mittel', manifests itself in Ida Kerkovius' work in new, un-dogmatic elements. She accompanied her teacher to Stuttgart in 1908, was given a master studio at the academy and began working as an independent artist in 1911. In the years of war, Hanna Bekker vom Rath, Kerkovius' later sponsor and collector, took private painting and drawing lessons with the artist. She spent the years 1920 to 1923 studying at the Bauhaus in Weimar where she met Johannes Itten, Paul Klee and Wassily Kandinsky. It was one of the preconditions of the Bauhaus that each artist had to learn a craft, and Kerkovius chose weaving. In 1922 she received German citizenship with her naturalization in Wuerttemberg. In 1925 Kerkovius traveled to Paris, Northern Italy and Switzerland and participated in famous exhibitions. She was included in the list of 'degenerate artists' by the National Socialists in 1933 and in 1939 her family was "repatriated" to Germany where Stuttgart became her second hometown. The artist's studio in Stuttgart was completely wrecked during an air raid, destroying many of her paintings and works, but she continued working after 1945 with the same unbroken enthusiasm as before. Ida Kerkovius' works are influenced by western painting traditions. The artist adopted the languages of Cubism, Expressionism and abstract painting.

In this decorative flower still life Ida Kerkovious blends several stylistic devices with great poise. Next to plain colorfield painting, the work shows notions of a modulating expanded color spectrum, in terms of form both abstraction and representational features are visible. Everything is based on a color concept following the Adolf Hölzel, which, with all its illuminating power, is the composition’s dominating factor. All stages of the artist’s development are played through and integrated into the composition, their complex color forms are the causal element of the image‘s message.

The last two decades of her life were extremely successful. She was awarded the 'Bundesverdienstkreuz erster Klasse' (Federal Cross of Merit) in 1954, the title of professor as well as an honorary membership of the board of the 'Deutscher Künstlerbund' followed in 1958. She continued working incessantly until her death even though she was severely ill. Her last oil painting 'Bel Vue' was never finished. Ida Kerkovius died in Stuttgart on 8 June 1970. [KD].