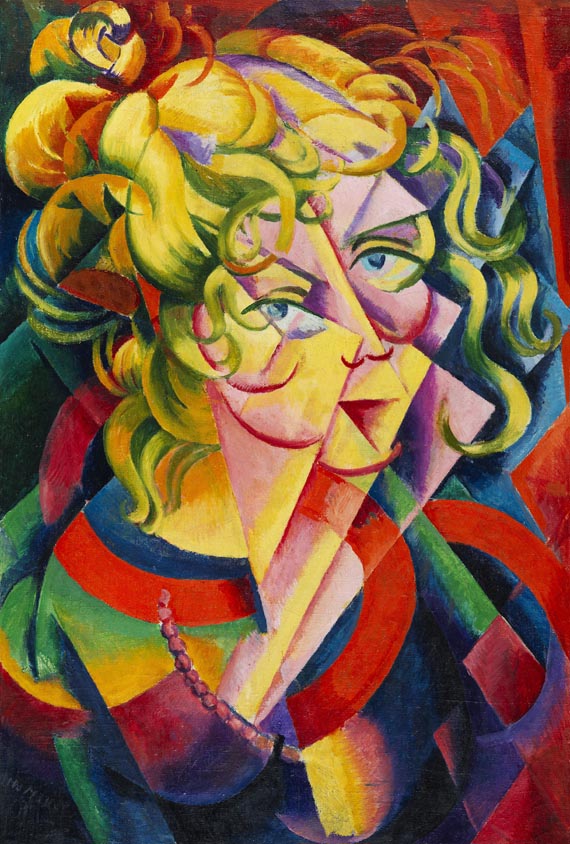 Otto Möller was born in the Thuringian village Schmiedefeld on 20 July, 1883. At the age of 21 he began his studies at the Royal Art School in Berlin and was trained by Philipp Franck to become a drawing teacher. Before he began to teach drawing in Berlin in 1909, he had completed one year in the studio of Lovis Corinth. Even Möller‘s early work, which was very close to Impressionism, shows clear traces of an upcoming Expressionism. For instance, some of his earlier works go far beyond the school of Lovis Corinth in terms of the use of colors. As early as of 1910 his paintings were characterized by clear color contrasts and sharp contours. However, Möller did not aim for an absolute painting and never entirely abandoned representational art throughout his entire artistic creation. This may also be the reason for the closeness to New Objectivity and Cubism, which will determine the character of his later works. After World War I Möller joined the November group in 1919 and participated in their exhibitions up until 1932. The group’s characteristic syncretism of styles, which comprises elements from Cubism and Expressionism, was decisive for Möller‘s work up until the end.

Under the influence of the Italian Futurists, first and foremost Gino Severini, who brought a new form of synchronous and asynchronous motion into the picture, and who came up with similar design principles as their German contemporaries in the first half of the 1920s. The formal rhythmization of the image surface, which Möller aims for in this portrait, leads to a de-individualization of the depicted person. It is not the personal relationship between the painter and the model that is the theme, but the prism-like analysis of an outer effigy. This, in return, allows a composition arranged in color fields that, in their restrained closeness seem to live a life of their own. What is so fascinating about this portrait is the harmony of formal parts and colors of this picture, making a heterogeneous unity to which the optical variety is subordinated.

From 1920 to 1940 Möller was teaching methodology and education at the ‘Zentralinstitut für Unterricht und Erziehung‘ and contributed to the reforms of art education. In 1946 Möller followed a call to the State School for Visual Arts in Berlin, where he lobbied for an increased appreciation of children drawings. He published numerous writings on this topic. Otto Möller retired in 1955 and died in Berlin on 29 February, 1964. [KD].

More Information
+
Sell
Get a free appraisal for a similar object!
+
Register for
Otto Möller
+
Buying from A-Z
+
Contact a specialist
Share