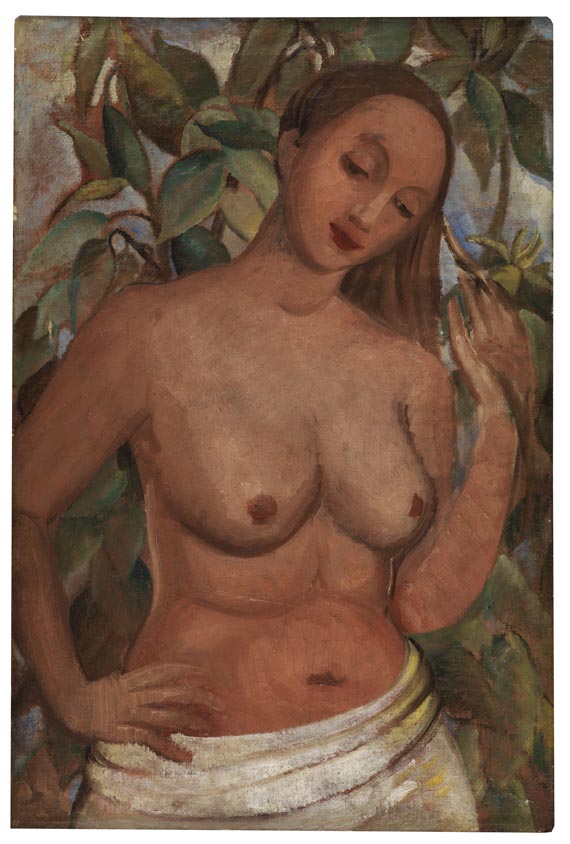 We are grateful to Dr. Maike Bruhns, Hamburg, for her expert advice. The work is registered in her catalog raisonne´under the number 132 a .

Born in Hamburg in 1885, Anita Clara Rée grew up in the cultivated atmosphere of a liberal bourgeoisie Jewish family. However, she was raised as a Protestant and has the pleasure to receive the best education. In 1903 she made a sketchbook with 46 mostly figurative studies that show clear influence of Munch and Liebermann. In 1905 she was a student of Arthur Siebelist, a self-taught artist from the circle of Hamburg plein air painters, and continued to develop her individual style. In January 1906 Rée met Liebermann in Berlin; he, being her artistic idol, succeeds in dispelling her doubts and worries regarding her talent. She wants to be more than just an amateurish well-brought-up young lady, she aims for a professional education and thus on and off got into conflict with her surroundings, both in terms of time capacity and her origins. Rée tried to get private lessons with Wilhelm Trübner, Karlsruhe, and Leo von König, Berlin, however, she eventually joined Franz Nölken, with whom she shared a studio in Hamburg in 1910 and 1911. In winter 1912/13 Anita Rée stayed in Paris and took lessons with Fernand Léger. In 1913 she participated in an exhibition in the Galerie Commeter in Hamburg and was part of the Hamburg avant-garde from that point on. Anita Rée had become member of Hamburg’s high society and her portraits made for her increasing success over the following years. During the years of World War I from 1914 to 1918 she turned to religious topics for the first time. In 1919 Rée was a founding member of the Hamburg Secession, and was both part of the board of directors as well as of the jury of the first exhibition in December 1919, in the following she also participated in further exhibitions. Critics see Rée‘s work entirely positive. From 1922 to 1925 Rée lived mostly in Positano on the Italian Amalfi coast and returned to Hamburg only for her exhibitions. An early form of New Objectivity developed in her works, which is also characteristic of her later pictures and drawings. As of 1926 Rée lived in Hamburg again and participated in numerous exhibitions, however, there is also negative criticism now ands one of her paintings was not accepted for the exhibition "Hamburger Kunst" in August 1927. Anita Rée more and more withdrew from the artists of the Secession.

"She became a painter of beautiful girls and women, her pictures, documents of a never ceasing high quality creativity, were always attuned to the individual personality of the depicted person. They show a high level of empathy, sympathy or even tenderness for the model. Knowledge of human nature, high aesthetic standards and an emotional identification often made for a felicitous consent." (Maike Bruhns, Anita Rée. Leben und Werk einer Hamburger Malerin 1885 - 1933, Hamburg 1986, p. 123). In her portraits of women Anita Rée shows femininity in all its facets, from the shy girl to the modern woman of the early 20\up5 th century. Her female figures are complex personalities, which is why our depicted person on the one hand poses quite self-confident in her nudity, at the same time she looks down and shyly plays with her hair. The flower attributes, which the artist frequently used in those days are in the background off this work and serve as mere props. In its sensual nativeness and the lush vegetation she is surrounded by she evokes associations with Eve and paradise with the observer.

In 1929 and 1931 she executed murals in two schools, of which only one, the picture "Orpheus with the animals " is still in existence today in the Hamburg Ballett School. In 1930 Rée was commissioned to make the Ansgar triptych for the new building of St. Ansgar church in Hamburg-Langenhorn. However, the community is not happy with her ideas, in 1932 the plan was finally abandoned for "cultic concerns. Consequently Anita Rée left Hamburg and settled on the island of Sylt. In 1933 she was defamed by the Hamburg artists as a "dissimilar member" and was excluded. Isolated and shocked about the new political circumstances she committed suicide on 12 December, 1933. [SM].

More Information
+
Sell
Get a free appraisal for a similar object!
+
Register for
Anita Rée
+
Buying from A-Z
+
Contact a specialist
Share