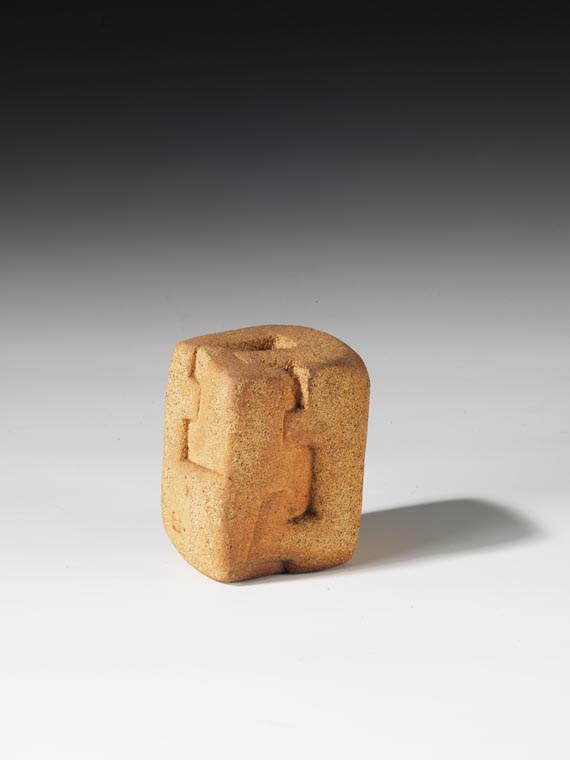 On 10 January 1924, the Spanish sculptor Eduardo Chillida was born in San Sebastián in the Spanish Basque region. Chillida began to study architecture in 1943, but he soon dropped out of that university. Instead he enrolled in the private art college "Circulo de Bellas Artes" in Madrid and mainly worked with plaster and clay at the beginning. Even with his first sculptures he made a positive impression on the critics. In 1949 Chillida went to Paris and started to work on iron sculptures. Back from Paris he went to Hernani where, in 1950, he finished his abstract sculpture "Ilarik". With this work he realised his perception of plastic art where space is in the center of attention. In the following years his plastic work as well as his graphics are increasingly influenced by this perception of spacial limits. During the subsequent years Eduardo Chillida became a reknown sculptor and graphic artist. His pieces are not only shown at numerous international exhibitions, but also at many documenta exhibitions and biennale events. In Venice Eduardo Chillida was awarded the Great International Sculpture Award in 1958. Two years later he received the Kandinsky Award.

Eduardo Chillida was always fond of trying out new materials, for instance fire-proof artificially made clay (chamotte). The coarse surface is in contrast to the materials easy modulation capability. With this sculpture the ramifications which Chillida usually used seem to disappear in the form, they seem to turn inward and thus make for an enclosed just slightly structured cuboid. The compact form seems to reject space. The sculpture’s measurements can only describe the factual size, however, not its actual dimension, as even Chillida‘s smallest object can be described as monumental.

In 1980 the Guggenheim Museum dedicated a retrospective to him in New York. Eduardo spent the last years of his artistic work in San Sebastián. Chillida's work makes him one of the most important sculptors who realized their object in a concrete style. The main characteristics of his pieces are homogenous materials and the division into figural forms. Eduardo Chillida died in San Sebastián on 19 August 2002. [DB].