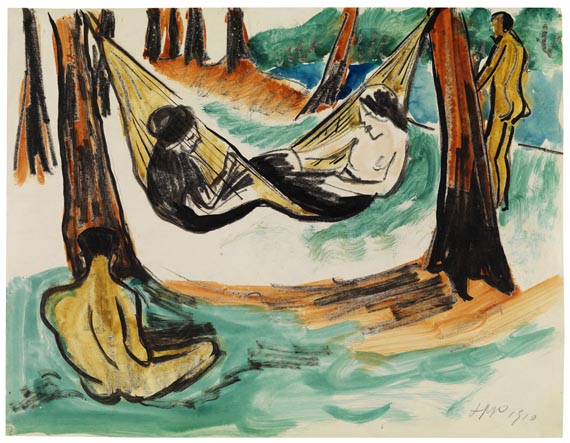 We are grateful to Mr. Alexander Pechstein for his kind support in cataloging this lot.

Max Pechstein's artistic talent was discovered and encouraged at a very early age. His conventional career, first as an apprentice with a Zwickau painting master, then at the Dresden School of Arts and Crafts and finally at the Dresden Academy under the decorative painter Otto Gußmann, provided Pechstein with a sound craftsmanship. His ceiling painting at the Dresden Arts and Crafts Exhibition in 1906, with such an unconventional color scheme that the organizers had it sprayed with gray paint to soften the colors, attracted Erich Heckel's attention. He then invited Pechstein to join the artist group ‘Die Brücke' which had been founded the year before in opposition to Impressionism. The group's aim was to "attract all revolutionary and restless forces" (Schmidt-Rottluff) and an emphasis of the power of color in painting. In this environment Pechstein's Expressionist style developed further, concentrating on elaborating the focal point of the painting with a sparse painting technique. Pechstein moved to Berlin in 1908 and became a co-founder of the ’New Secession'.

Works made between mid July to mid August 1910 in the calm remoteness of the Moritzburg Lakes near Dresden are striking documents of the fondness for a life in nature that Max Pechstein and his artist friends Erich Heckel and Ernst Ludwig Kirchner had. The easy nudity is an expression of a liberation from inner constraints that also becomes visible in their art. Nature and man make for a unity that the observer can clearly feel. Unlike the 19\up5 th century, when nature in art led a romantic life of its own, it is now subject to an artistic will that integrated spontaneous thoughts in reduced-expressive forms. The composition, which is balanced in terms of its sincerity of forms, is an almost perfect example for this struggle for a maximum degree of concentrating artistic means with the objective of an image effect that entirely does without any affect.

He painted figures, still lifes and landscapes in a moderately Expressionist style. Perhaps it was this, which lead to the artist's early and continuing success. From 1945 Pechstein taught at the Berlin Academy of Arts. Before that time, during the Third Reich, he was slandered as a "degenerate" artist. Apart from paintings his oeuvre includes more than 850 woodcuts, lithographs and engravings. [KD].