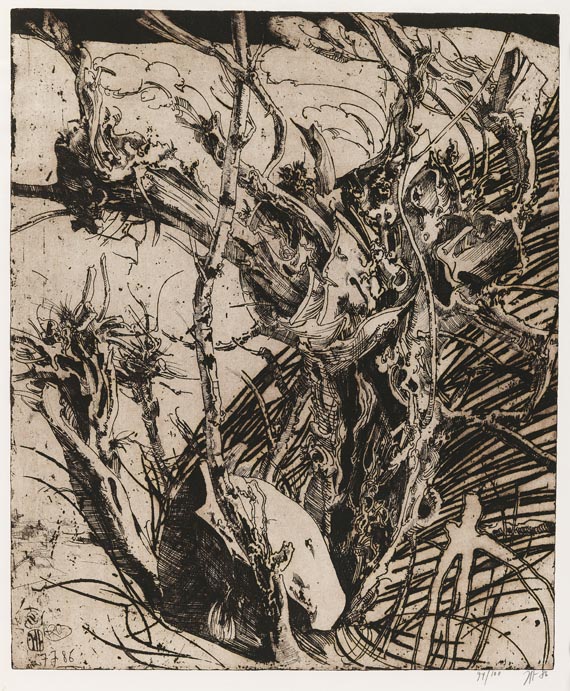 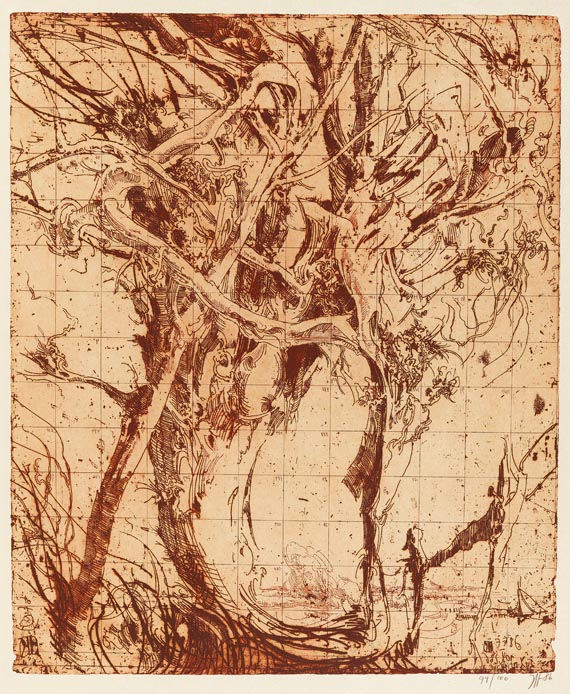 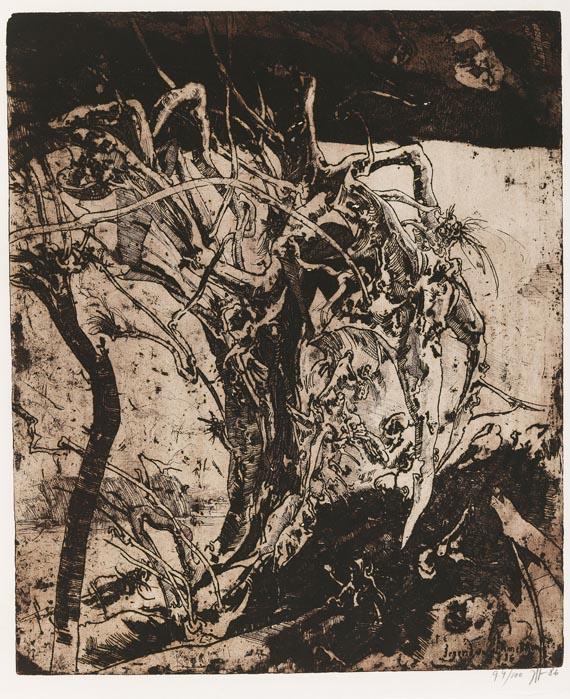 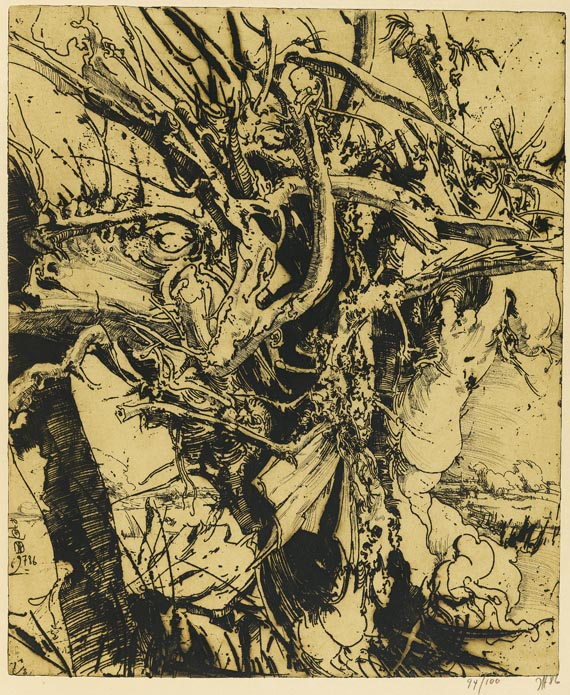 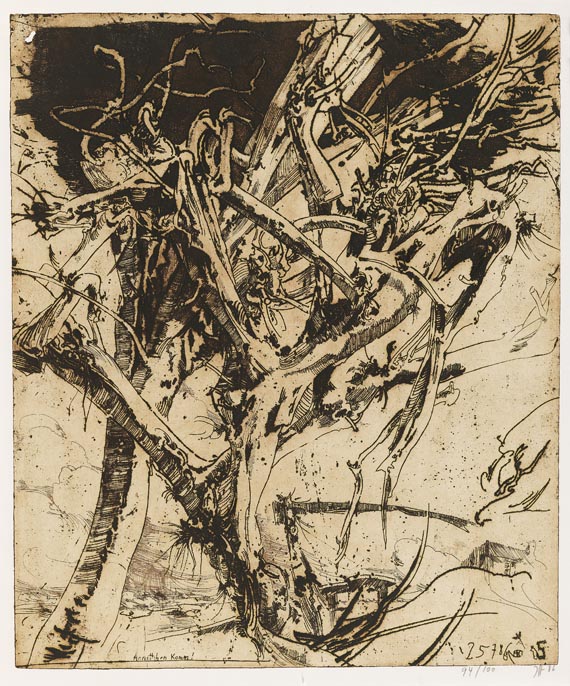 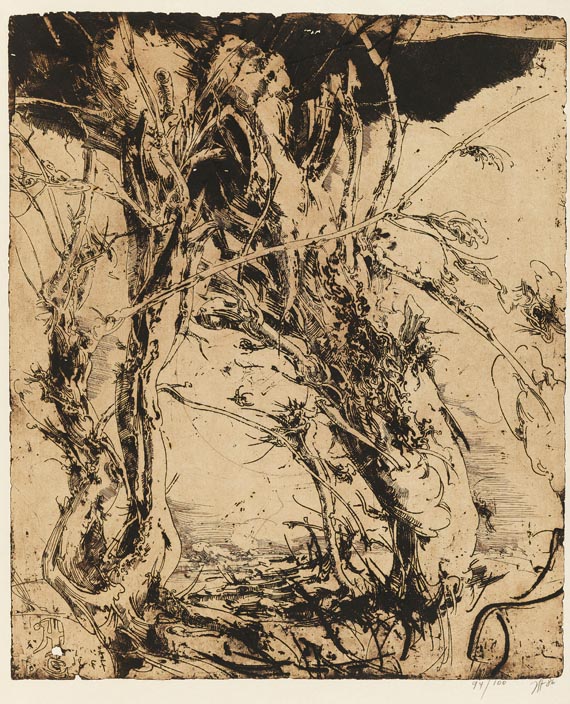 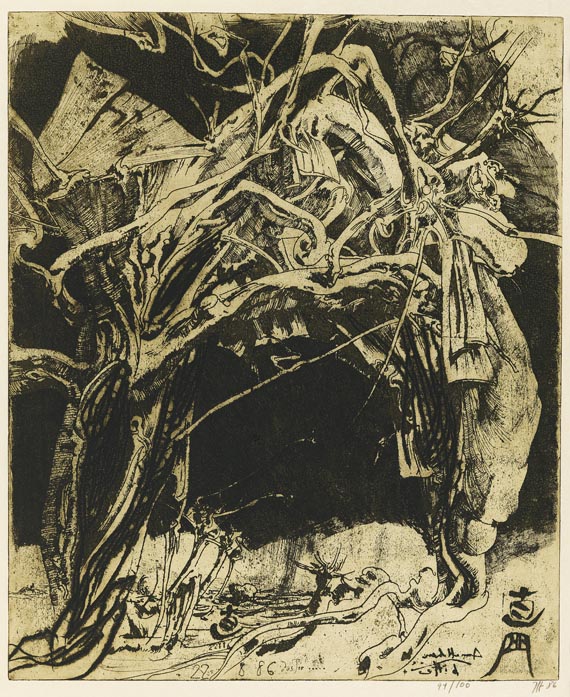 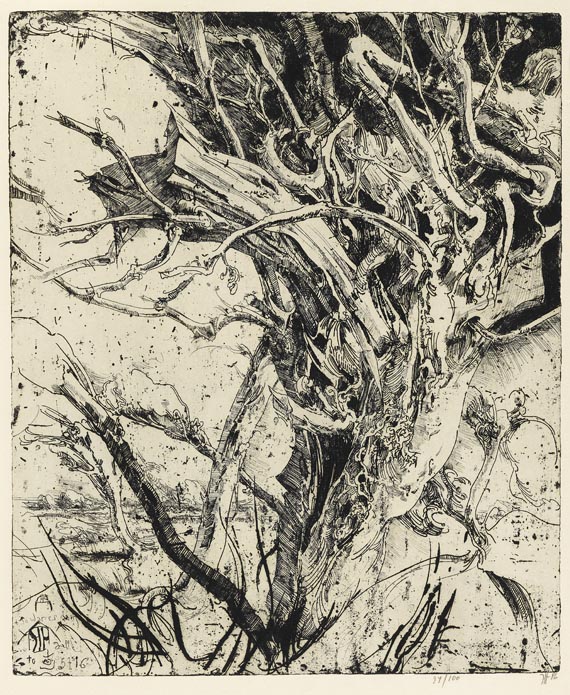 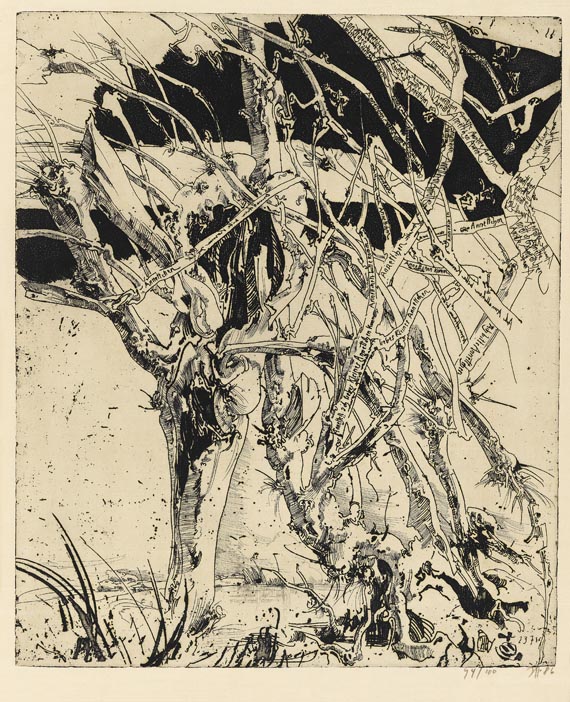 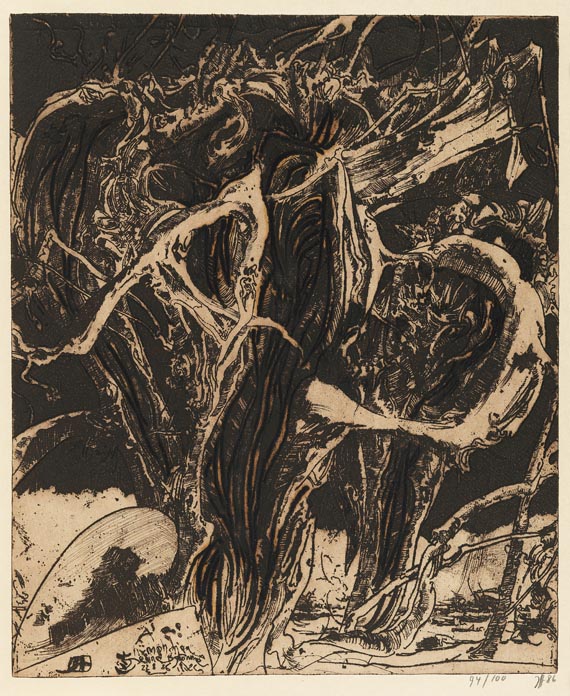 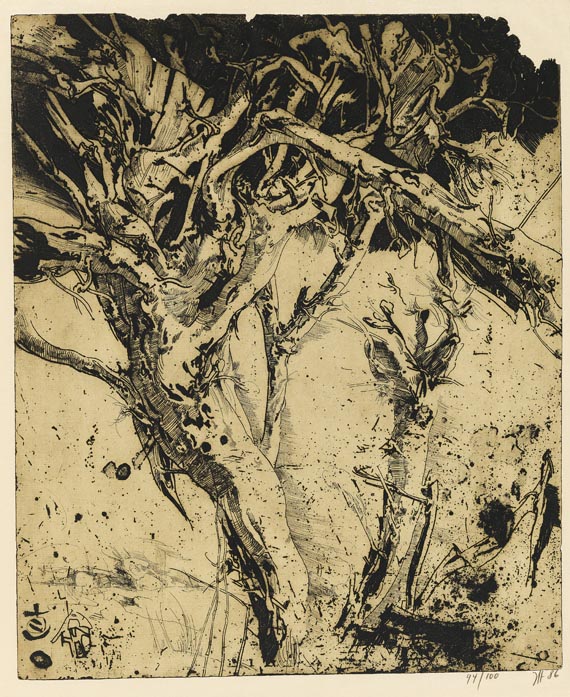 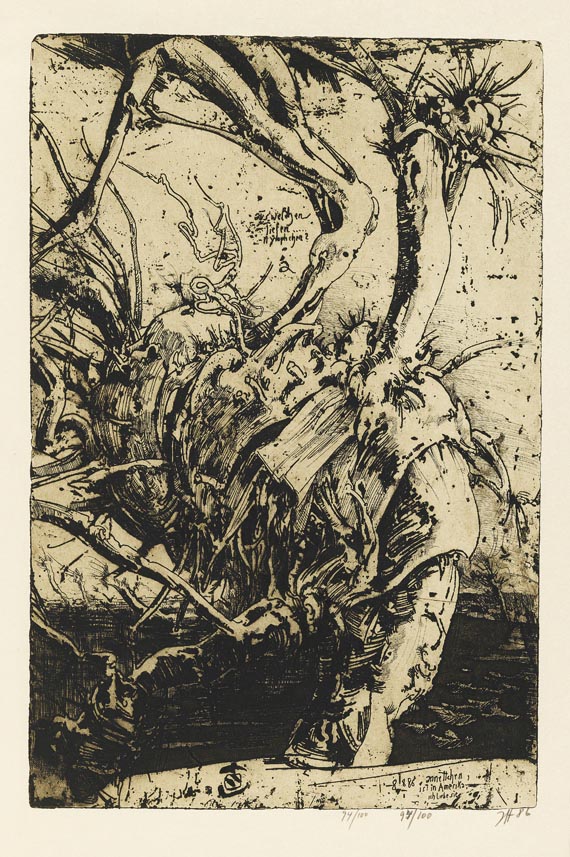 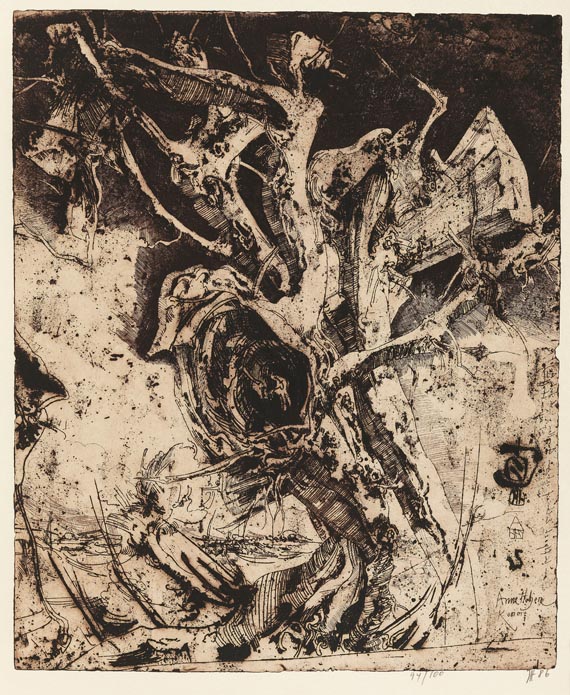 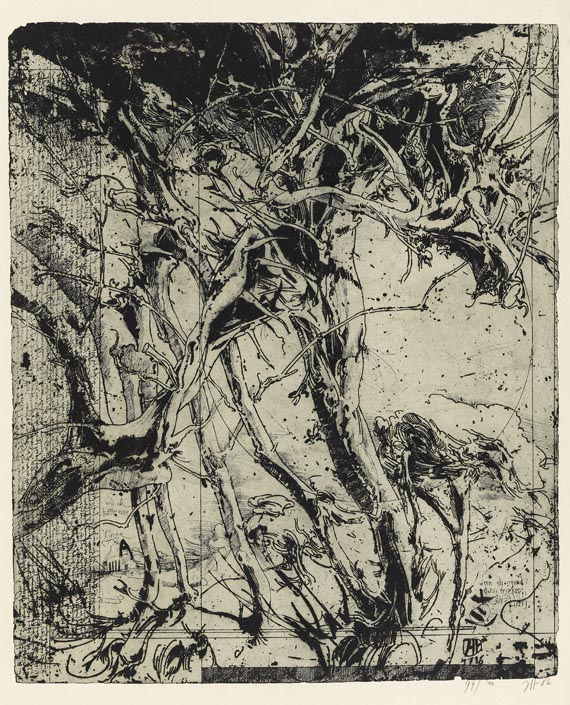 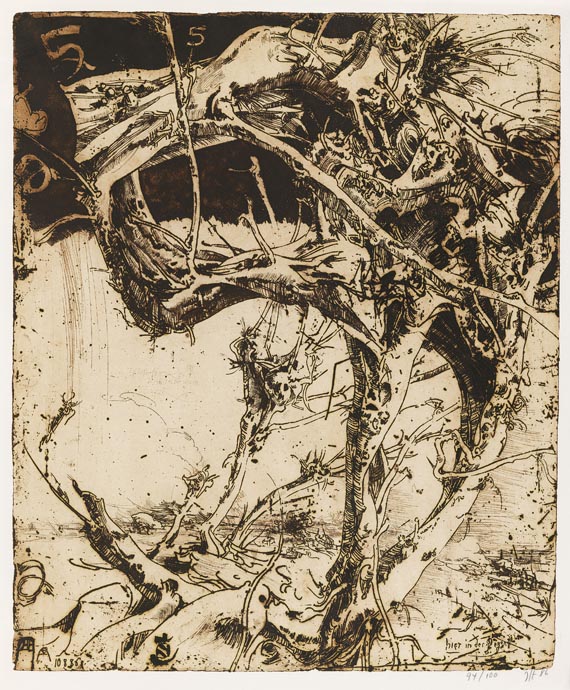 Horst Janssen was born in Hamburg on 14 November 1929. He grew up with his mother and his maternal grandparents in Oldenburg. On his mother's death, his aunt Anna took him in and enrolled Janssen at sixteen at the Hamburg Landeskunstschule, where he studied between 1946 and 1952 and entered the master class of Alfred Mahlau, who arranged minor commissions for Janssen while he was still a student. Janssen experimented with various monotype printmaking techniques and did his first woodcuts. In 1952 Horst Janssen was awarded a Lichtwark grant by the city of Hamburg and had to leave the Landeskunstschule. Already successful, Janssen was awarded a scholarship by the Cultural Circle of the German Industrial Association in 1957. Janssen began to be awarded prizes, including the Art Prize of the City of Darmstadt in 1964 and the following year the Edwin Scharff Prize of the City of Hamburg. He also had his first retrospective at the Kestner-Gesellschaft in Hannover. Janssen refused a professorship at the Hamburg Landeskunstschule. In 1967 Janssen moved to his 'castle' in Hamburg-Blankenese and separated from Verena. After winning the first prize for printmaking at the Venice Biennale, Horst Janssen began to collaborate with Hartmut Frielinghaus, his 'copperplate printer', producing several portfolios, including 'Hokusais Spaziergang' ['Hokusai's Walk'] and 'Hannos Tod' ['Hanno's Death']. Janssen was by now widely acclaimed. He was awarded the 1975 Schiller Prize of the City of Mannheim and the Biermann Rathjen Medallion of the City of Hamburg in 1978. His work was shown at numerous exhibitions, including a touring exhibition that visited major American museums. In 1990 Horst Janssen fell from the balcony of his house. He was also threatened with blindness from the acid he used to bite his etchings. In 1992 he was made an honorary citizen of the City of Oldenburg. Horst Janssen died on 31 August 1995. Two years after his death the Janssen Cabinet was established in the Hamburg Kunsthalle and in 2000 the Horst Janssen Museum was inaugurated in Oldenburg. Horst Janssen is considered one of the most important printmakers and draughtsmen of the postwar era. He bequeathed to posterity a comprehensive œuvre, which includes 3000 etchings. [DB].