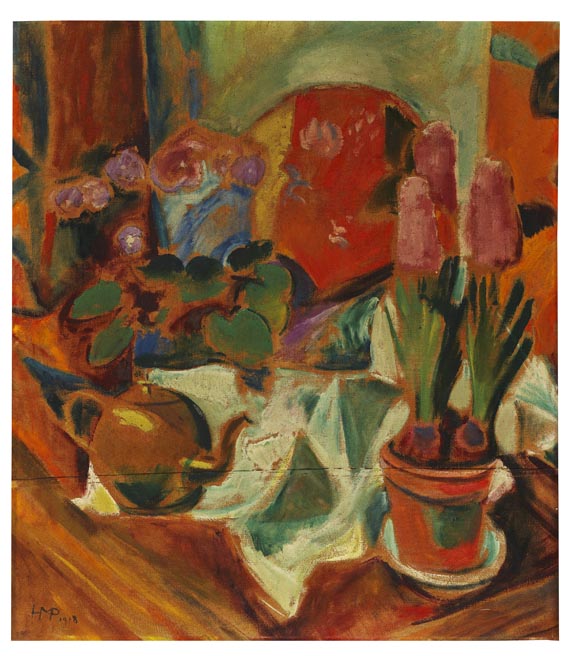 The painting will be in cluded into the forthcoming catalog raisonné of Pechstein's paintings, which is currently prepared by Dr. Aya Soika, under the number 1918/18.

Max Pechstein's artistic talent was discovered and encouraged at a very early age. His conventional career, first as an apprentice with a Zwickau painting master, then at the Dresden School of Applied Art and finally at the Dresden Academy under the decorative painter Otto Gußmann, provided Pechstein with a sound craftsmanship. His ceiling painting at the Dresden Arts and Crafts Exhibition in 1906, with such an unconventional color scheme that the organizers had it sprayed with gray paint to soften the colors, attracted Erich Heckel's attention. He then invited Pechstein to join the artist group ’Die Brücke' which had been founded the year before in opposition to Impressionism. The group's aim was to "attract all revolutionary and restless forces" (Schmidt-Rottluff) and an emphasis of the power of color in painting. In this environment Pechstein's Expressionist style developed further, concentrating on elaborating the focal point of the painting with a sparse painting technique. Pechstein moved to Berlin in 1908 and became a co-founder of the ’Neue Sezession'. He painted figures, still lifes and landscapes in a moderately Expressionist style. Perhaps it was this, which lead to the artist's early and continuing success.

Social changes brought about by World War I also left their traces in the art Max Pechstein. On the one hand on a material level, as this work was painted on two jointed canvasses, the horizontal seam can be seen in the lower third of the picture. Max K. Pechstein, the artist’s on, wrote to the work’s previous owner in 1982: "As far as your remark regarding the mended canvas is concerned, your are right with your presumption that this is due to the lack of material in 1918, the year of its origin: indeed, after World War I HMPechstein had great difficulties, which he mentioned in his 'Erinnerungen' (Memories)." On the other hand these changes can be regarded from an artistic perspective: In the attempt to walk new paths and on the basis of what he had already attained, he made new works among which our work also counts. In these works Pechstein reintroduced a certain pictorial component. The sophisticated subject of a triparted composition consisting of fan, teapot and hyacinth pot is combined by means of an amorphic painting style and is thus subordinated to a rather romantic expression. A certain pacification of the image area occurs, which Pechstein employs to round off the overall character of the still life and to harmonize the composition. Reminiscence of Cubism may be observed in the tablecloth’s exhilarated folding, but they are rather marginal as they do not dominate the picture. A differentiated coloring, which reverts to old models in terms of its object-orientation, can be interpreted as an attempt to take all future creation to a new direction, what in fact did happen. The "Stillleben mit Fächer" (Still Life with Fan) stands exemplarily for an important time of change in the oeuvre of Max Pechstein and must be regarded and valued in front t of this background.

In 1937 Herrmann Max Pechstein was defamed as degenerate. From 1945 Pechstein taught at the Berlin Academy. Before that time, during the Third Reich, he was slandered as a "degenerate" artist. Apart from paintings his oeuvre includes more than 850 woodcuts, lithographs and engravings. [KD].