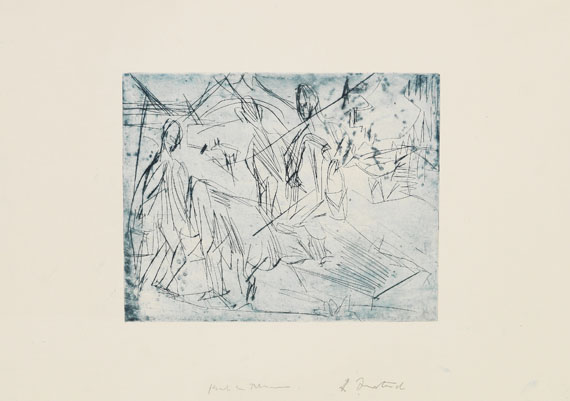 The work is registered at the Ernst Ludwig Kirchner Archive, Wichtrach/Bern.

PROVENANCE: From the artist's estate (verso with estate stamp).

Essay
During his years in Davos, Kirchner devoted himself to the representation of farm life. In this context, the scenes that he paints, draws, and reproduces in his lithographs are no isolated idyllic motifs but rather more [..]depictions of life in the alpine valleys.. as a naturally and socially developed form of life[..]“ (Lucius Grisebach, Das Erlebnis der Berge, Ernst Ludwig Kirchner, Cologne, 1995, p. 159.) Thus the everyday summertime farming life was to a large extent determined by association with livestock. The artist repeatedly resorted to the motif of herds of cows, which had also played an important role in his paintings of 1920/21. Scenes such as setting out in the morning and the evening return of the herd, as well as their being dunked in the spring, gained increasing significance for Kirchner following his hectic years in the metropolis Berlin. Despite the thematic shift at the beginning of his Davos years, Kirchner´s artistic style remains unchanged. This print displays the typically spontaneous and temperamental working method as well as the caricatural distortion, which are expressed via the figures´ elongation and foreshortening. All the same, the works from this creative period have great personal value for the artist. „Kirchner himself repeatedly wrote that, for him, the move to Davos had the same artistic and human value as did Tahiti for Gauguin.“ (Roman Norbert Ketterer, Ernst Ludwig Kirchner. Zeichnungen und Pastelle, Stuttgart/Zürich, 1979, p. 71.)
More Information
+
Sell
Would you like to sell a similar object?
+
Register for
Ernst Ludwig Kirchner
+
Buying from A-Z
+
Contact a specialist
+
Ernst Ludwig Kirchner Biography
Share