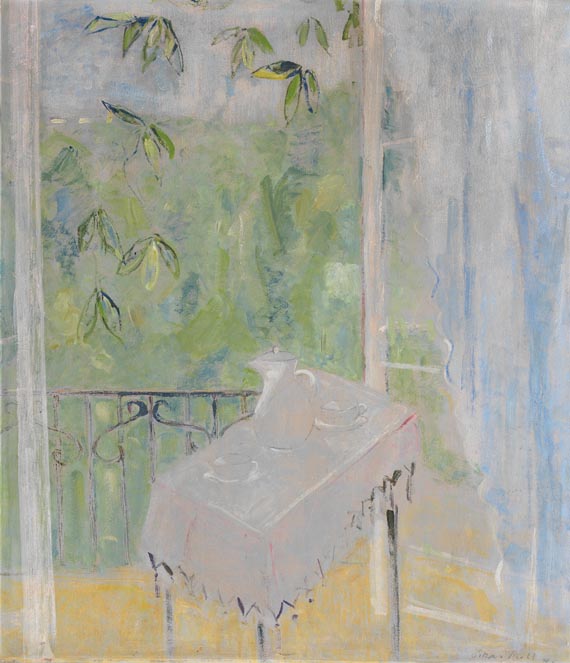 We are grateful to Dr. Gerhard Leistner, Regensburg, for his kind support in cataloging this lot. Dr. Leistner is currently working on the continuation of the catalog raisonné of works by Oskar Moll.

Oskar Moll, born in 1875, belongs to that generation of artists that contributed to the breakthrough of new artistic visions and contents. Moll met Matisse in Paris and, together with his wife Marg Moll and Purrmann, he founded the “Ecole matisse“, to which he stayed closely connected throughout his life. His works were defamed during the Third Reich, the war itself destroyed two thirds of his work. In 1946 Moll and his wife returned to Berlin. In his last creative period Moll did not only depict objects that were actually in front of him, most of the works were then made from his memory. He went back to established subjects and arranges them in new compositions This work belongs to the group of window pictures in which he again and again interpreted the subject of an interior scene in front of a window or a balcony. Light is a recurring topic in all of Moll‘s works. In his last paintings the colors become more and more tender and spiritual. In this picture of an interior the filmy pastel tones are ruptured by black accents. Oskar Moll‘s artistic legacy unites tendencies from Impressionism to Cubism and is closely linked with the fundamental changes in art in his days.