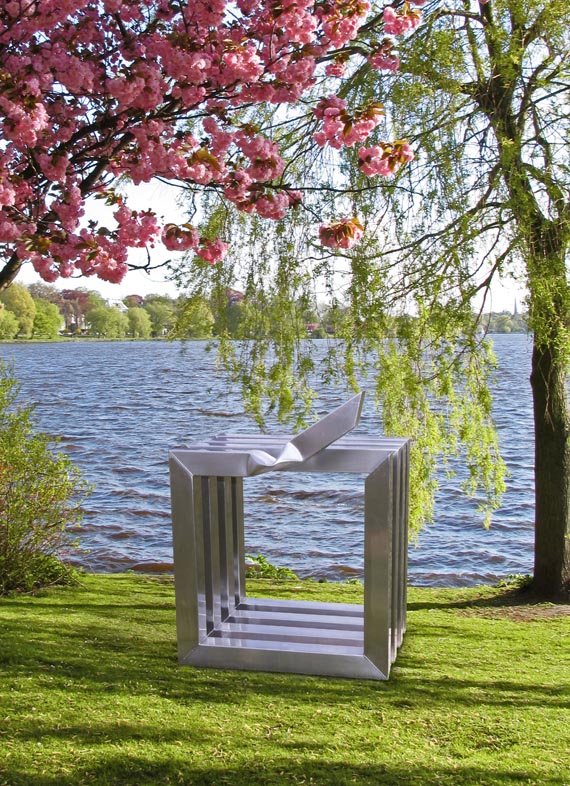 Accompanied by a photo certificate by the artist.

Alf Lechner, a contemporary German sculptor, was born in Munich on 17 April. Lechner started his career as a painter, studying from 1940 to 1950 by Alf Bachmann, a traditionalist landscape painter, near Lake Starnberg. Landscapes in the Impressionist manner notable for deft brushwork were early Lechner works but they soon yielded to more abstract formulations. As versatile as he is prolific, Alf Lechner has worked since 1950 as a graphic artist, industrial designer and inventor. He has designed chairs and lamps, including lighting for operation theatres, which he made himself at his own small factory. It was not until 1961 that Alf Lechner began to devote himself more intensively to sculpture, producing his first works in steel. These pieces are, on the one hand, defined by the material steel, with which Alf Lechner has worked virtually to the exclusion of all others, and, on the other, by basic geometric forms, which are variously juxtaposed paratactically, multiplied, divided or interlocking. The first solo show of Alf Lechner's sculpture was mounted in 1968 and the work was widely acclaimed.

The work group called ‘Verformungen‘ (Deformations )was made between 1967 and 1972. Initially triggered by a chance find, Alf Lechner made hollow bodies in an altered shape due to force effect. Depicting the impact of changing function correlations is more important to Lechner than the mere invention of forms. In an exhibition at the Galerie Stangl in 1971 numerous variations of these bundlings and frame constructions, which all have the deformation of one element in common, were on display.

Subsequent phases of his work represent a continuous process of refining both form and theme. They may seem simple, but the Lechner works consisting in basic geometric forms are the result of the most sophisticated analyses and a meticulously thought-out reductive process. In addition to free-standing works, Alf Lechner has produced a considerable number of architecturally related works of sculpture for public spaces. The artist has been the recipient of quite a few art awards and has been represented at numerous solo and group shows. In 2000 the Alf Lechner Museum was inaugurated in Ingolstadt, a fitting tribute to the artist in his lifetime.