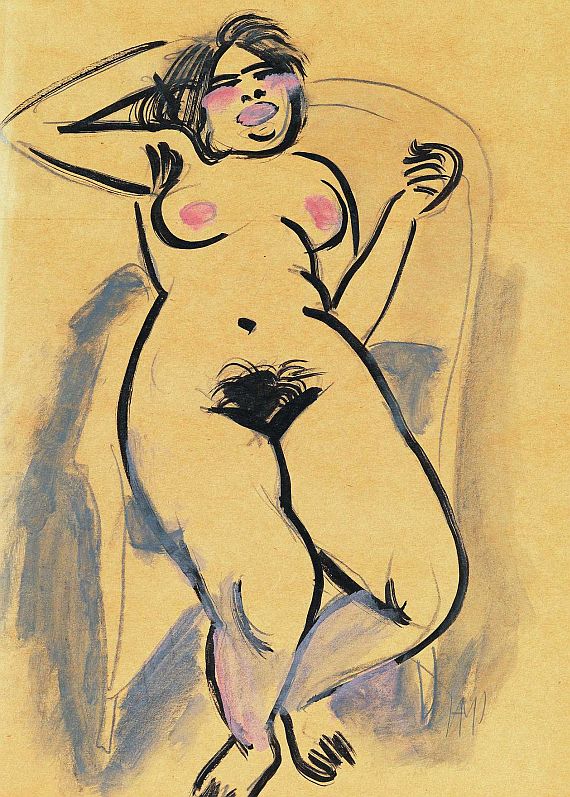 We are grateful to Alexander Pechstein for his kind support in catalging this lot.

Max Pechstein's artistic talent was discovered and encouraged at a very early age. His conventional career, first as an apprentice with a Zwickau painting master, then at the Dresden Kunstgewerbeschule and finally at the Dresden Akademie under the decorative painter Otto Gußmann, provided Pechstein with a sound craftsmanship. His ceiling painting at the Dresden Arts and Crafts Exhibition in 1906, with such an unconventional color scheme that the organisers had it sprayed with grey paint to soften the colors, attracted Erich Heckel's attention. He then invited Pechstein to join the artist group ,Die Brücke' which had been founded the year before in opposition to Impressionism. The group's aim was to "attract all revolutionary and restless forces" (Schmidt-Rottluff) and an emphasis of the power of color in painting. In this environment Pechstein's Expressionist style developed further, concentrating on elaborating the focal point of the painting with a sparse painting technique. Pechstein moved to Berlin in 1908 and became a co-founder of the ’Neue Sezession', which sees itself as a sort of counter organization of the ‘Berliner Sezession‘, which had become a sole lobby for Impressionism under the directorship of Liebermann, towards the expressionists and their artistic innovation they had a negative attitude. Together Heckel, Kirchner and Schmidt-Rottluff Pechstein spent the summer months in Dangast and the Moritzburg Lakes, where decisive breakthrough towards the Brücke style developed.

Detached from all academic conventions the Brücke artists were committed to nude drawings en plein-air. What they have in common is an enthusiasm for the strange and primitive, mediated by expressive African sculptures, which the artists had seen in the Dresden museum of ethnology, thus nudes from those years often have exotic facial features. In or drawing, which originates from the heyday of Brücke-Expressionism, Pechstein executed a female nude in a provoking lasciviousness with a poised line management and effective color accents.

He painted figures, still lifes and landscapes in a moderately Expressionist style. Perhaps it was this, which lead to the artist's early and continuing success. From 1945 Pechstein taught at the Berlin Akademie der Künste. Before that time, during the Third Reich, he was slandered as a "degenerate" artist. Apart from paintings his oeuvre includes more than 850 woodcuts, lithographs and engravings. [JS].