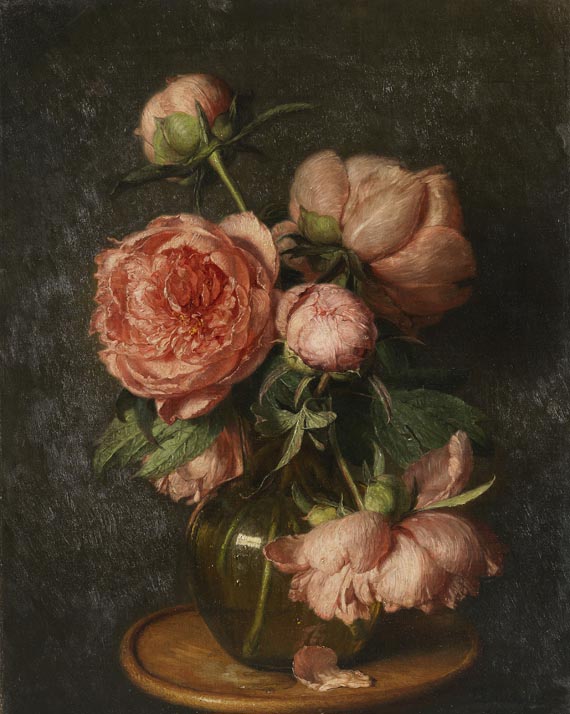 The village parson, who also enabled him to attend the grammar school in Neiße, was the first to recognize and encourage the artistic interests of Eduard von Grützner, who was from a large peasant family. By sending him to Hermann Dyck's private school in 1864, he enabled Grützner to study drawing in Munich. In 1865 Grützner finally joined Anschütz's painting class at the academy, af ew years later, in 1867, he was accepted into von Piloty‘s class. Among his other teachers count the history painter Johann Georg Hiltensperger as well as Alexander Strähuber. Three years later he left the academy and moved into his own studio. Among Piloty's students Grützner was one of the more traditional artists – particular in terms of his style as well as his palette - like Franz von Defregger and Eduard Kurzbauer. Beginning in his student years - with the painting "Im Klosterkeller" - he soon specialized in depicting monastic life. His popular scenes depict the merry atmosphere in cellars, kitchens and alehouses in a humorous and anecdotal manner. Grützner was appointed professor at the Munich academy in 1886. Apart from his monastic pictures, Grützner also produced a Falstaff cycle, theatre and hunting scenes and affectionately detailed interior studies, which he often included in his monastic scenes. He also worked as a free-lance illustrator, caricaturist and graphic artist.

Flower still lives count among the artist’s rarest and most sought-after works. Those few known works made around the turn of the century must be considered quiet counterparts of the humorous genre pieces. With a well-balanced palette and a great love for the detail, the artist lived up to the important position still lives occupied in 19\up5 th century painting.

Grützner died in 1925 in Munich. With his comprehensive oeuvre Grützner counts among the most important Munich genre painters of the 19\up5 th century. [CM].