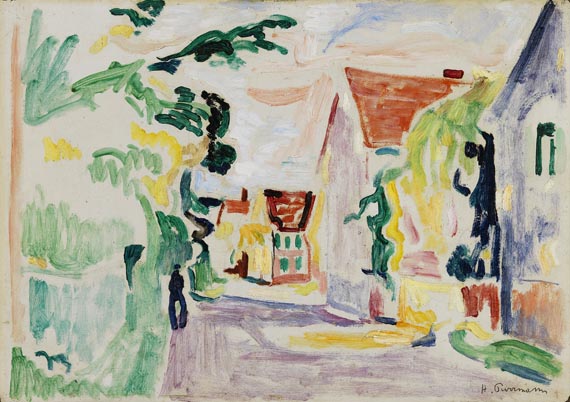 The work is registered in the Hans Purrmann Archive, Munich, under the number 1197.

Hans Purrmann went to Paris in 1905, where he met Henri Matisse in the circle of German painters in the Café du Dôme. In 1908 Purrmann, accompanied Matisse, traveled to Germany, where he also spent some time twice in 1909/10. The outbreak of the first world war caught him in Beilstein, Württemberg, where he stayed for two years, during which his possessions in Paris were confiscated. In 1916 he settled in Berlin, where he participated regularly in exhibitions of the ’Free Secession'. In 1918 the first one-man show took place at Paul Cassirer's gallery in Berlin. Purrmann spent the summer months in Lagenargen on Lake Constantia, where he had bought a small house. In his works he captured the landscape southern character in a vivacious style, which shows the influence of Fauvism, due to the free and generously applied paint and the strong coloring. The sketch-like appearance, which also characterizes our small scene of a street in summer, is typical of the poise of Purmann‘s landscapes. [JS].