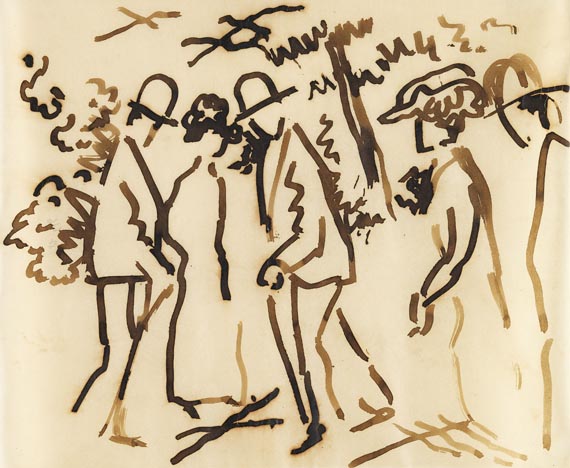 Born on January 3rd, 1887, in Meschede, August Macke grew up in Bonn and Cologne. Being filled with enthusiasm about the painting of Böcklin, he began his studies at the art college and the arts and crafts school in Düsseldorf. In 1907 August Macke traveled to Paris, where he saw paintings of the Impressionists, which fascinated and influenced him. Back in Germany he went to Berlin and attended the painting school of Lovis Corinth for a short time.
After doing his military service for one year as a volunteer in 1908, the artist married - now in Bonn - Elisabeth Gerhardt. In 1909 he got acquainted with Franz Marc at Kochelsee, with whom he would be friends for the rest of his life. With their colorful and spacious, two-dimensional forms Macke's works from that time clearly displayed the influence of the painting of Henri Matisse and Franz Marc. In 1911 August Macke joined 'Der Blaue Reiter', a group of artists from Munich. On another trip to Paris with Marc he got to know Robert Delaunay, who later visited Macke, together with Guillaume Apollinaire in Bonn. Macke examined Delaunay’s orphic way of painting, his colorful form of cubism had a lasting impression on him.

As far as August Macke‘s occupation with composition is concerned, drawings play a a decisive role in his creation. The basis thereof are his swift sketches of situations spontaneously captured in small notebooks. These ‘notes‘ were then transferred to a larger format, e.g. 270 x 320 mm (as with this work) in reed pen ad India ink, eventually they were executed in oil. In this process he did not necessarily carry over the whole drawing to the painting or the watercolor, he often rearranged and combined motif groups of different origins. Dominating motifs in Macke’s works from around 1913 are groups of figures and people who come across one another, as well as scenes in parks. The painting ‘Spaziergänger‘ Großer heller Spaziergang (Viersen 411) shows a group of two men and woman, similar to the group in our work.

The trip to Tunis with Paul Klee and Louis René Moilliet in 1914 also contributed to the development of his own style of bright, intensive coloration and crystalline design. On 26 September 1914 Macke fell at the western front in France at the age of 27.
August Macke's world of paintings is unmistakable. Quiet compositions, scenes of nature, the open countryside or of places inhabited by monumental, faceless figures show his harmony-seeking look at the contemplative world of the regular citizen - until the outbreak of World War I. [EH].