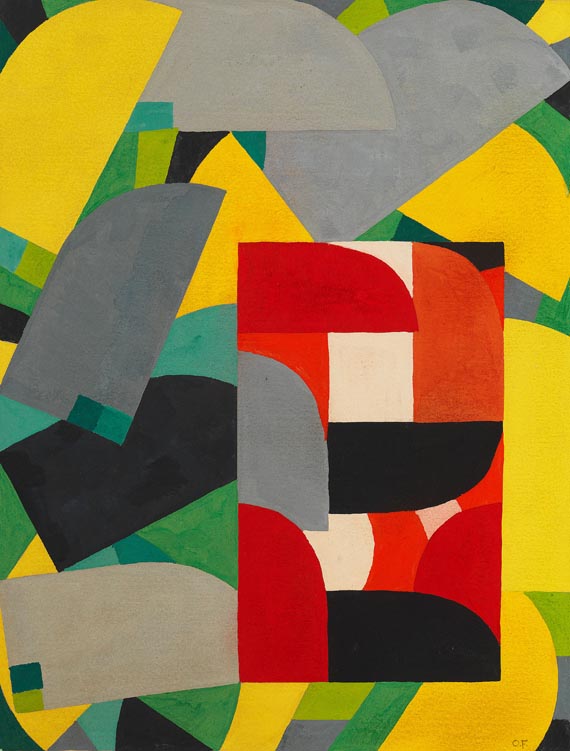 Accompanied by a photo expertise from Edda Maillet, Association Les Amis de Jeanne et Otto Freundlich, Paris, dated November 2008. The work will be included into the appendix of the catalog raisonné by Joachim Heusinger von Waldegg.

Otto Freundlich counts among the pioneers of abstraction. There are "not many artists in this country that have such sincerity and importance as it is the case with Otto Freundlich, who has an enormous intellectual format, a far-reaching consequence and rare completeness of his imagery concept. Despite Adolf Hoelzel and Kandinsky, Otto Freundlich was the only one who was in search of a new form of artistic expression before World War I." (translation of quote after: Joachim Heusinger von Waldegg, Otto Freundlich (1878-1943). Monography with documentation and catalog raisonné, Cologne 1978, p. 11). Freundlich's quest for new aesthetics began in the context of the social and artistic changes around the turn of the century. His interest in music theories, his examination of Hermann Helmholtz' "Lehre von den Tonempfindungen als physiologische Grundlage für die Theorie der Musik" and Bach's "Kunst der Fuge" add decisive impulses to Freundlich's abstract rythmitized style in form of contrasts of forms and colors. A motif that has been developed out of squares and circle fragments makes for the basis for our composition that captivates the observer with its unique dynamic and lucent coloring. [JS].