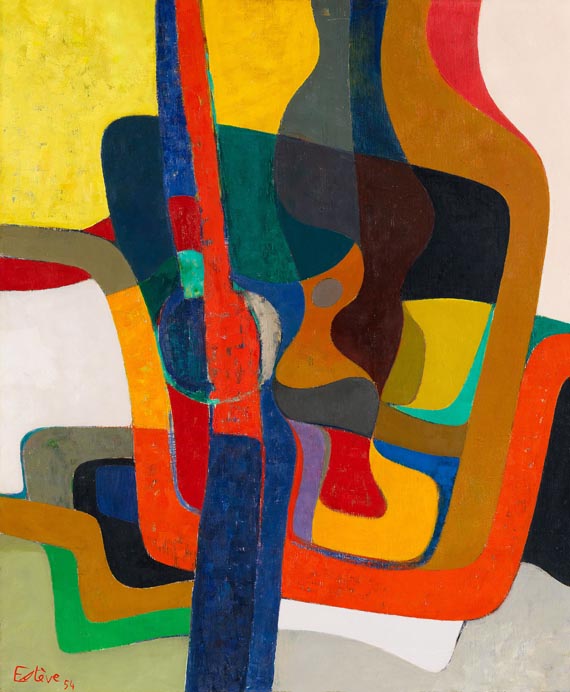 Maurice Estève was born in the French Culan (Département Cher) on 2 May 1904. In 1913 he moved with his parents to Paris, where he soon began to form himself artistically. During his visits to the Louvre in the 1920s Estève was specially impressed by the painters Jean Fouquet and Paolo Uccello. Among the modern artists he was particularly influenced by Cèzanne. Estève was mainly an autodidact and merely attended the free studio at the Acadèmie Colarossi in 1924 and he tried to achieve a Constructivist realization of his motifs after the role-models George Braques and Fernand Leger. Thus he had created a kind of Cubist Fauvism. Estève's extensive work not only included painting but also successful attempts at collages, textile design and even murals. Even though he avoided the extravert circle of the avant-garde, Estève can be considered one of the generation of artists who revived the "Ècole de Paris" after 1945. In 1954 he participated in the Biennale in Venice. Estève's oeuvre, together with that of Riopelle and Bazaine, introduced a new image language, a lyrical abstraction with the aim to depict forms and colors is a nearly poetic attitude.

This composition also followed these requirements. Estève‘s style originated from the concepts of Cubism and Léger‘s clear use of forms. He did not imitate reality, he works out a form of abstraction in the analysis of his relations to reality. He liberates himself from the recognizable object and makes the pure poetry of painting the only subject. Estève‘s created a world of images that leads an independent life, it is not reminiscent of anything earthly. In doing so, he found a harmonious balance between form and color. At times he harmoniously set the color nuances side by side in different zones and layers, at times he uses contrasting colors. The interplay between coloring and form let the observer participate in the impressions that Andalusia’s lights and landscapes had left behind on the artist.

His works are presented in many well-known museums and collections all over the world. Maurice Estève died at the great age of 97 in his hometown Culan on 21 June 2001. [SM].