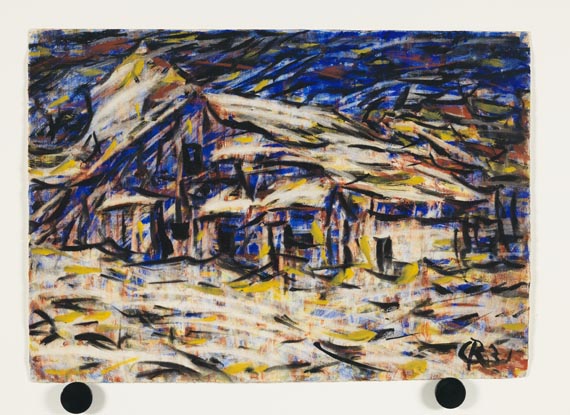 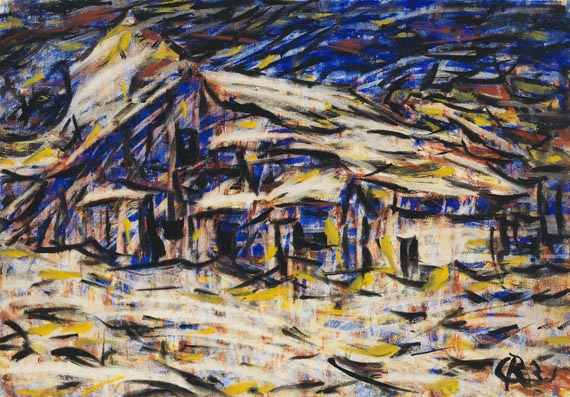 Christian Rohlfs was born in Niendorf in Holstein on 22 December 1849. During a two-year sickbed confinement from 1864-1866 Rohlfs was nursed by a doctor called Stolle, who discovered and supported the painting talent of the boy. At this time, the first drawings came into being. Upon Theodor Storm's suggestion and recommendation, Rohlfs went to Berlin and began his studies of painting at the ‘Großherzogliche Kunstakademie‘ in Weimar in 1870. A leg problem aggravated so badly during the following years that one of his legs was amputated in 1873. As a history and genre painter his works found approval by the Grand Duke of Saxonia-Weimar, who supported him for many years. From 1888 on, an independent stylistic development in parallel to the school of Barbizon and to French Impressionism can be recognized. Through Henry van de Velde Rohlfs got acquainted with the founder of the Folkwang Museum, Karl Ernst Osthaus in Hagen/ Westphalia. In 1901 Rohlfs moved there to run a painting school according to plans by Osthaus - which failed, however. During a summer stay in Soest in 1905, he got acquainted with Emil Nolde. Rohlfs' own tendency of expressive composition corresponded to the beginning Expressionism of the 'Brücke', to which early exhibitions at the Folkwang-museum attended. After his years of study at the academy, Rohlfs' work was formed for twenty years by Impressionism, but at the age of sixty, he found a late expressionist style. Favoring tempera on canvas and paper, he also created watercolors and prints. Several honors prove how much his late work was acknowledged. In 1929, the Christian Rohlfs Museum was founded in Hagen on occasion of the artist’s 80th birthday.

The strong gestural stroke of the brush, which Christian Rohlfs employed quite effectively in this work, creates an atmosphere of optical disturbance, which, at a first glance, is not suitable for this topic. But the deliberately overlapping strokes of the brush in combination with the wash make for an overall effect that is unmatched in terms of the expression’s viridity and the brilliant colors. In his later works Christain Rohlfs became detached from narrative elements, the subject are simple and gain their suggestive forces on the observer alone from their strong and unusual interpretation. In his fundamental work on drawings and watercolors by Christain Rohlfs, Paul Vogt rightly points to the fact that Rohlfs always saw his subjects as a whole, in order to harmonize the technique with the object.

After the Nazis seized power Rohlfs was expelled from the Preußische Kunstakademie der Künste in 1937 and 412 of his paintings were rated 'degenerate' and were removed from German museums. One year later, on 8 January 1938 Christian Rohlfs died in his studio in Hagen. He was remembered as one of the most important representatives of German Expressionism in art history. [KD].