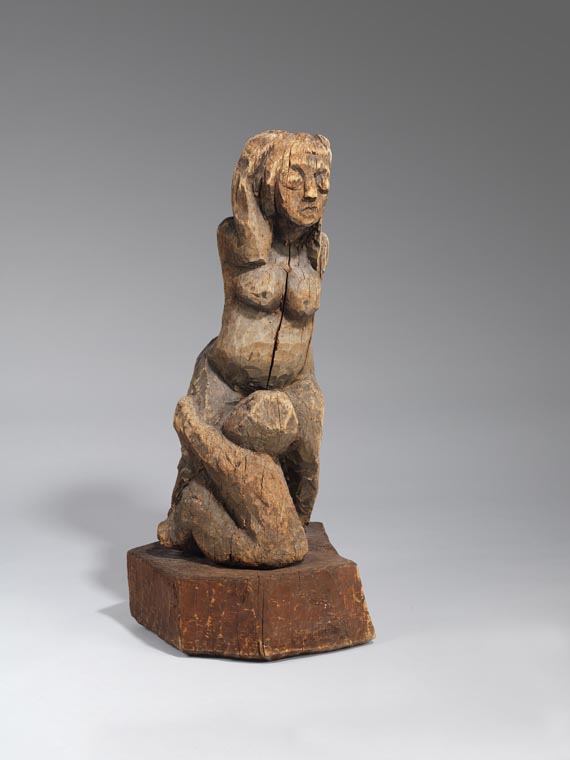 Accompanied by a writing from Mr Martin Schwander, Basel. The work will be included into the catalog raisonne of works by Hermann Scherer.

The sculptor, painter and woodcutter Hermann Scherer was born in Rümmingen in the Black Forest in 1893. After he had finished school he began a stone mason training in Basel. At the age of 21 he became a student of the Swiss sculptor Otto Roos and was the assistant of Carl Burckhardt from 1918 to 1921. His first academically coined classicist sculptures, which make for the main part of his early oeuvre, originate from those days. After he stopped working with Burckhardt in 1921, Hermann Scherer abandonded the idealized sculpting concept which led to a radical change in his art, he even went as far as to destroy a large part of his earlier works. It was during this period of artistic creation that Scherer participated in a group exhibition in the Kunsthalle Basel and he sold a work to a public collection for the first time. A visit to an Edvard Munch exhibition in the Kunsthaus Zurich in 1922 confirmed his decision to do painting along with sculpting. However, Scherer was most decisively influenced in this decision by the expressionist Ernst Ludwig Kirchner, whom he assisted in the preparation of an exhibition in the Kunsthalle Basel in summer 1923. In the following, Kirchner invited him to a working stay in Frauenkirch near Davos, which led to an intensive frtiendship between the two artists. Herman Scherer spent a lot of time in Frauenkirch over the following year, making numerous drawings, paintings, woodcuts and most of all wooden sculptures, which all show the influence from the art of his friend.

In his wooden sculptures Hermann Scherer sought to express the raw and fresh expression, which he believed he could only find in the primitive. Any form of spiritualization, which is followed by an aesthetic formation, seemed incoveyable to Scherer in the face of the brutalization of the circumstances of human life. Strongly geared at the sculptures of Ernst Ludwig Kirchner, which in return had been strongly coined by the aboriginal art, Hermann Scherer created individual figures and groups that call reminiscence of the primeval with their massive physicalness. The unfinished version "Mutter" makes the process of creation almost exemplarily comprehensible. The sculpture literally seems to grow out of the wooden block but still remains part of it. The creative-original aspect is the heart of the message and becomes manifest in the title "Mutter" (Mother).

In 1924 Scherer showed three wooden sculptures in the important "Ausstellung Neuerer Deutscher Kunst" (Exhibition of New German Art). Together with his young Basel colleagues Albert Müller and Paul Camenisch he founded the artist group "Rot-Blau" on Vew Year’s Eve in 1924/25. The group was modeled after the Dresden artist group "Brücke". They did not have any explicit program, but a closeness to the style of their mentor Ernst Ludwig Kirchner cannot be denied, their objective is a rejection of the dark painting of their contemporaries. After just three exhibitions the group "Rot-Blau" broke up again in 1926, as Müller died unexpectedly in 1926 and Hermann Scherer fell ill the same year and died a year later in Basel at the age of 34. On occasion of his death Hermann Scherer was honored in the media by artists such as Kirchner and art critics like Georg Schmidt. In 1928 the Kunsthalle Basel showed a large commemoration exhibition. [KD].

More Information
+
Sell
Get a free appraisal for a similar object!
+
Register for
Hermann Scherer
+
Buying from A-Z
+
Contact a specialist
Share