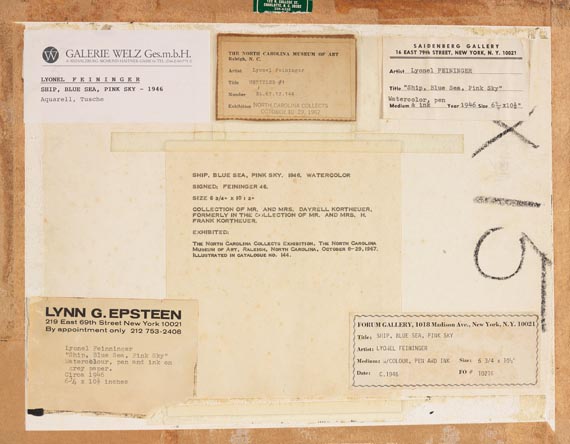 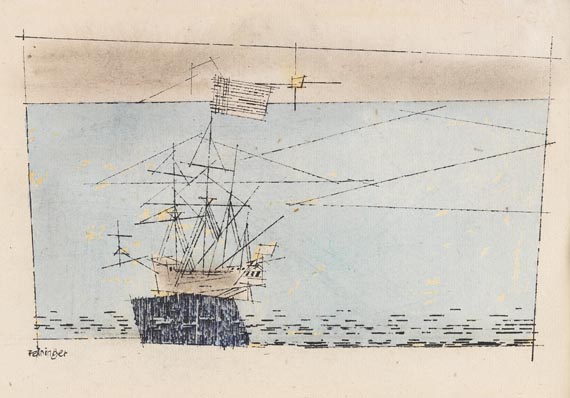 The ships on East and Hudson River dominate New York’s cityscape. And Lyonel Feininger knows them all, the different types of sailing ships, cutters and steamers. These ships in all variations become characteristic of Feininger’s artistic work. They connect the backbone’s of Feininger’s visual ideas, the romantic and the technical-constructive aspect, in a very special way. Nautical motifs also play an important role in his later American works. However, his style underwent an important change during this period. The cubic-spatial aspect gave way to the two-dimensional, painting was replaced by graphic art, accordingly, Feininger’s later style is often fittingly described as his ‘graphic period‘. This work clearly shows the features characteristic of this late creative period. The clear forms and the absence of persons are just as characteristic as the scant usage of colors to support the linear composition. But yet, Feininger shows great poise in filling the straight and austere forms with airiness and motion.

In 1945 Feininger ran a summer course at the Black Mountain College in North Carolina, where he met Gropius and Einstein. His teaching, his writing and his later watercolors were an important source for the development of Abstract Expressionism in America.