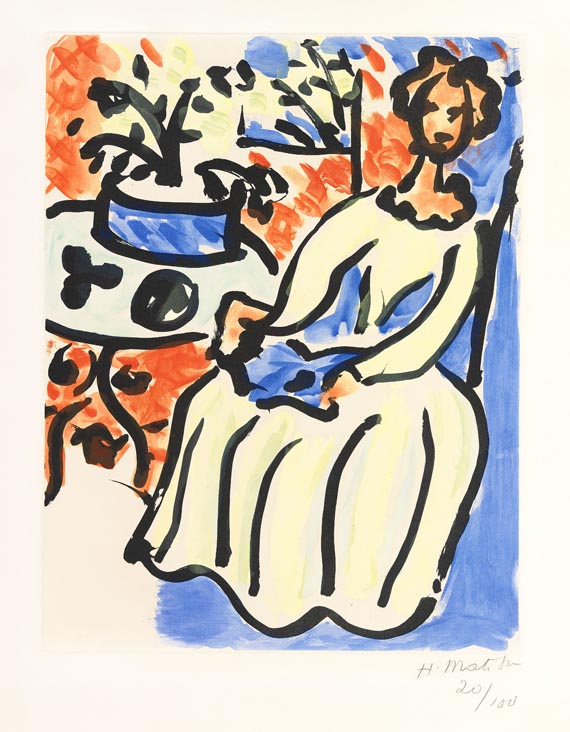 Matisse, one of the great reformers of European painting in the first half of the 20th century, was born in Le Cateau on 31 December 1869. Havig completred his law studies, Matisse decided to go to Paris in 1891, where he began painting . At first, he took evening classes at the Ecole des Arts Décoratifs and regularly visited the Louvre where he would copy in front of the paintings. His works are characterized by increasingly simplified forms and brilliant colors which he developed after studying neo-Impressionist ideas about color. The passionate colors of his works led to them being criticized as 'Fauves'(wild ones) at the Paris autumn Salon in 1905. Matisse thus became the main protagonist in a circle of young artists which also included Derain, Manguin and Rouault. Color to Matisse was the pure means of creating an autonomous picture space. Figural motifs no longer possess their material function so that two-dimensional-decorative, arabesque-like elements dominate his interiors. In 1908 Matisse founded his own school which particularly influenced German painters such as Purrmann or Levy. He went on a journey to Morocco in 1912, an experience which is reflected in the 1920s in his series of 'Odalisks'. At the same time he was closely examining Cubism. Matisse participated in the ArmoryShow in New York in 1913, in 1918 he and Picaso showed works in a gallery in Paris. From 1917 Matisse spent most of his time in Nice. As of 1944 he developed the so-called "gouaches découpées", which follow a concept of collage. The single forms were cut from papers that had been painted with gouache.

Similar to Picasso, Henri Matisse also left an extraordinarily comprehensive oeuvre. Matisse was a painter, drawer, sculptor and graphic artist. Additionally, he made stage designs and murals. Along with his drawings, his around 800 graphic works deliver proof of his impressive productivity, but also thematic concentration. Matisse basically focused on portraits and female nudes. Even though color was his central means of artistic expression, Matisse created only one orig. etching in colors, that is this sheet "Marie-José en robe jaune" from 1950. Form and coloring in this impressive late work by the then 81 year old artist have become largely detached from the object, inner contours that emphasize the physical are entirely done without. In our sheet the artist combined the reduced contour, as it was characteristic of the nudes from the 1930s with the homely scenery of the "Odalisk" depictions.

His career reached a peak when he was commissioned to paint the interior and to design the stained-glass windows of the monastery chapel Notre-Dame du Rosaire in Vence near Nice from 1949 to 1951. Henri Matisse died on 3 November 1954 in Nice. [JS].