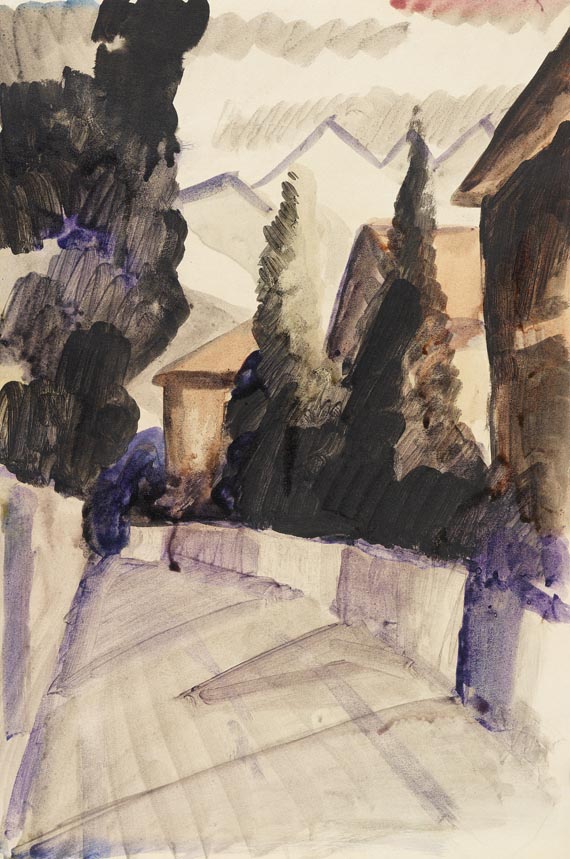 Born in 1887 in Meschede, August Macke grew up in Bonn and Cologne. Being filled with enthusiasm about the painting of Böcklin, he began his studies at the art college and the arts and crafts school in Düsseldorf. In 1907 Macke traveled to Paris, where he saw the paintings of the impressionists, which fascinated and influenced him. Back in Germany, he went to Berlin and attended the painting school of Lovis Corinth for a short time.
After doing his military service for one year as a volunteer in 1908, the artist married - now in Bonn - Elisabeth Gerhardt. In 1909 he got acquainted with Franz Marc on the Kochelsee, with whom he would be friends for the rest of his life. With their colorful and spacious, two-dimensional forms, Macke's works from that time clearly displayed the influence of the painting of Henri Matisse and Franz Marc. In 1911 August Macke joined the Munich artist group 'Der Blaue Reiter'. On another trip to Paris with Marc he got to know Robert Delaunay and his orphic way of painting.

A journey to Hilterfingen on Lake Thun in 1913 was of a special importance for Macke, as this was the place where the idea for the famous trip to Tunis, which Macke went on with Paul Klee and Louis Moilliet in 1914, first came up. Macke had come to Hilterfingen with the intention to turn his attention solely to this landscape, which was completely new to him. He wanted to do without the experiments he had been doing before. Lothar Erdmann wrote about this time: "Despite his usual habit, he had not taken any pictures with him to Hiltewrfingen. He wanted to start all over again, uninhibited by his past. He wanted to rely entirely on his sense, on the plain view of nature. He left behind him everything that seemed to be problematic, all
'-isms', with which he had been dealing over the previous years (without ever really becoming subservient)." (Lothar Erdmann, in: Elisabeth Erdmann-Macke, Erinnerung an August Macke, Stuttgart 1962, p. 354). Everything about the landscape is seen in its complete forms, which Macke later endowed with his characteristic coloring while in Tunis. In this respect our watercolor is an important part of his way to a world of new colors and forms. a world that will be associated with his name for all times.

On 26 September 1914 Macke fell at the Western front in France at the age of 27. His world of images remains unmistakable. Calm compositions, scenes set in nature, in greenery or on squares, populated by monumentally conceived faceless figures, are proof of his harmony-seeking view on a contemplative world – up until the outbreak of World War I. [KD].