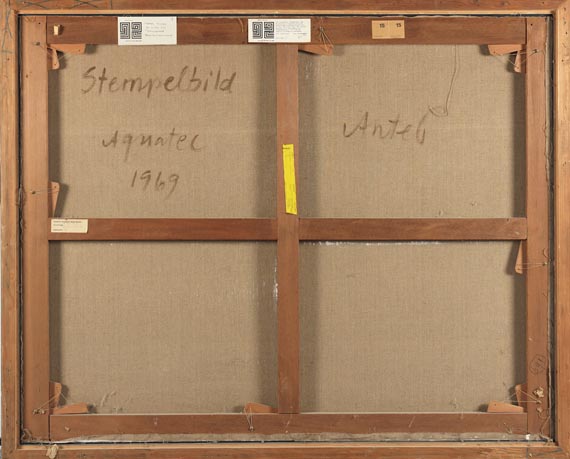 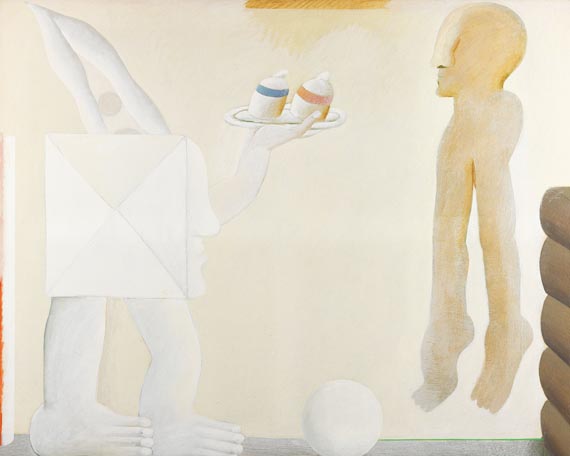 Horst Antes was born in Heppenheim on the Bergstraße in 1936.He received his art training at the Karlsruhe Academy of Fine Arts from 1957 to 1959 under HAP Grieshaber, who was exclusively making figurative works. Antes‘ creative starting point can be located mainly in informal art and its gestural expression. One of his most important role models was Willem de Kooning, who combined informal and figurative elements in his work. In 1960, he gradually thinks up the figure of the 'Kopffüßler' (literal translation: Head-Footer) from vehemently jotted color structures. Ever since he as been occupied with this figure in countless variations and versions as well as different artistic techniques. He received the Villa-Romana-Prize in 1962 and lived in Florence, and the Roman Villa Massimo scholarship in 1963. During these years he attained a calmer palette. He lectures at the Karlsruhe State Academy of Fine Arts from 1965 to 1967, after this lectureship he is appointed professor. Discontinued by a guest lectureship in Berlin, Antes stayed in Karlsruhe until 1973.

Two ‘Head Footers‘ are shown, reduced, as usual, to what is essential; feet, head, nose mouth; however, in this picture without ears and eyes. Just the hand of the one figure is important and is thus shown presenting two stamps. As if natural, an envelope is integrated into the head. The second figure, to whom the stamps are presented, seems to be jumping for joy. The scene appears fantastic and dreamy. The reduced coloring with the harmoniously calm color surface contribute to this impression. This poetic atmosphere is characteristic of Horst Antes’ works from the late 1960s.

The artist resumed teaching at the Karlsruhe Academy in 1984. The city of Stuttgart awarded him the Hans Molfenter Prize in 1989. Since 1990 the artist has been living and working in Karlsruhe, Florence and Berlin. Antes' oeuvre includes not only paintings and graphic art, but also sculptures in public spaces. His works are exhibited throughout the world and are represented in all of the most important German collections, for instance in the Kunsthalle Hamburg, the Museum Ludwig in Cologne or the Nationalgalerie Berlin. [EH].