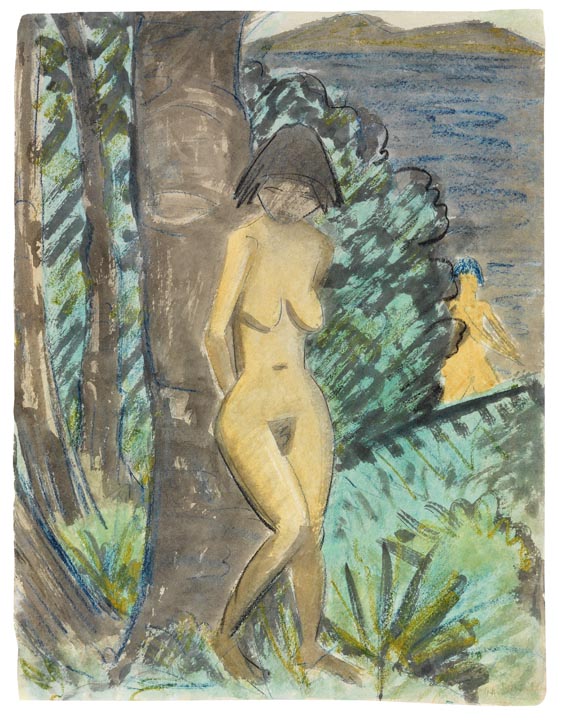 Born on 16 October 1874 in Liebau in the Sudeten Mountains, Otto Mueller spent his early years with his mother, brothers and sisters at his grandparents' Liebau estate. In 1882 he moved away to join his father in Görlitz, where he attended a higher secondary school. Between 1890 and 1892 he trained in lithography in Görlitz and Breslau. From 1894 until, it is believed, 1897 Mueller studied at the Dresden Art Academy under Georg Hermann Freye and, briefly, Carl Ludwig Noah Bantzer. In 1898/99 Mueller and his friend Paul Kother went to Munich to study. After he was not taken on as pupil by Franz von Stuck, he preferred to educate himself and moved to Wolfratshausen, south of Munich. In autumn 1899 he set out for Dresden and the surrounding region, where he mainly worked and lived until 1908, when he moved to Berlin. There he met Wilhelm Lehmbruck and Erich Heckel, who was a member of the artist group "Die Brücke" (The Bridge ), which he also joined in 1910. Mueller's artistic origin lies in Art Nouveau, which explains the decorative and linear aspect of his art. The way he emphasized the silhouette and the classical, elegant and graceful appearance of his figures reveal another important influence: Wilhelm Lehmbruck. Mueller's style underwent a significant change when he turned towards Expressionism. His forms were now broader, the contours more emphasized.

The open air nudes in the works of Otto Mueller are an expression of a special awareness of life. Mueller had a romantic idea of nature, which to him was an allegory for nativeness. This is why the individuals that he depicts in nature are not to be understood as civil individuals that explore into the realms of a new form of freedom by undressing themselves. Mueller’s nudes are part of nature, which also explains why his nudes move so naturally in their surroundings. Every notion of voyeurism, which sticks to this genre so much, is not existent in the works of Mueller. The girl leaning onto the tree, a motif that Mueller depicted in numerous variants, is lost in thought, almost unaware of being naked. The techniques Mueller used are in line with the motifs. They are just as unorthodox as the motif itself. Watercolors and drawings are combined in a way that they give the subject a certain consolidation. Thus Otto Mueller creates a certain freedom for his way of interpretation of a bucolic of an authentic expression.

After two years of military service from 1916 to 1918, Mueller followed a call to the Breslau academy where he taught uop until his death in 1930. [KD].