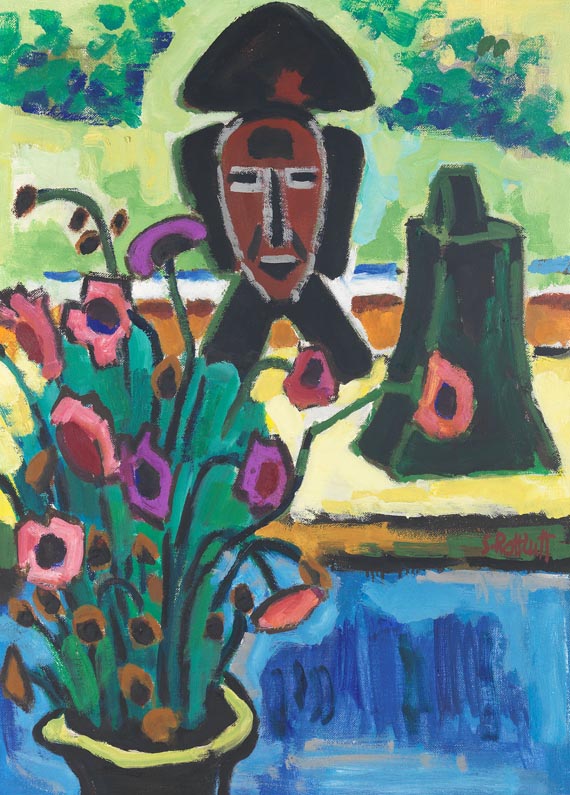 Karl Schmidt-Rotluff keeps his natural and creative strength up into an old age. His later works are coined by the same stringency of forms and colors as it is the case with works from an earlier period. He also kept his fascination for cultic art of primitive people, which had already played an important role in the early days of Expressionism. Following the period of Expressionism, Schmidt-Rottluff developed a linear –expressive painting style, which will consequently dominate his entire artistic creation. The strong contours, mostly kept in black, hint at the closeness to graphic art, and indeed, his watercolors are shaped by the same graphic basic concept. However, the unusually strong palette makes for something particular that goes far beyond the graphic composition. The rather two-dimensional composition of "Dunkles Symbol" (Dark Symbol) is transferred to three levels, in line with the old canon of fore-, middle- and background. In this case, however, without the usual spatial differentiation. It is just color and form that make for the picture’s effect.

The Brücke Museum, which was founded on his initiative, was inaugurated in Berlin in 1967. Numerous retrospectives in the Federal Republic paid tribute to this artist, who, as art historians unanimously agree, was one of the most important German Expressionists. The artist died in Berlin in 1976. [KD].