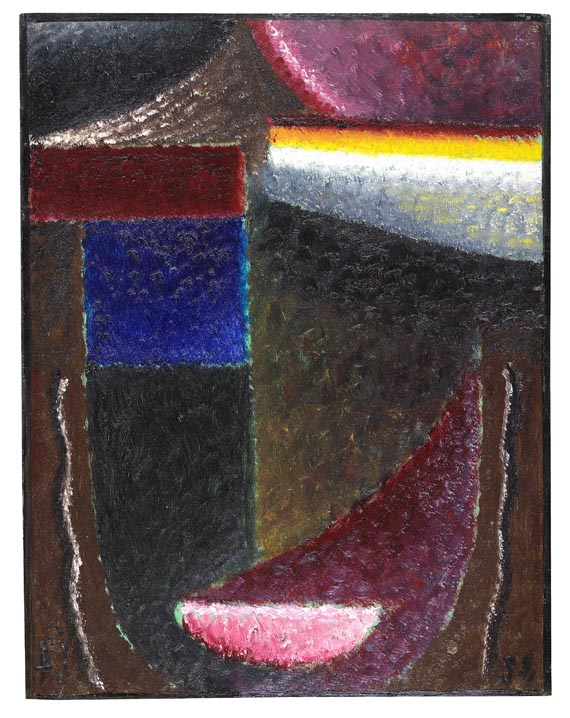 As a former officer Jawlensky began his artistic education in St. Petersburg as late as in 1889. He studied under Ilja Repin who introduced him to Marianne von Werefkin and Helene Nesnakomoff, his later wife. Jawlensky accompanied these two to Munich in 1896 where they wanted to attend a private art school. This is where Jawlensky met Wassily Kandinsky. The artist undertook several trips to France and was able to show ten paintings at the 'Salon d'automne' in 1905. Jawlensky met Henri Matisse for the first time. In summer 1908 he worked with Kandinsky, Marianne von Werefkin and Gabriele Münter in Murnau for the first time. There, the four artists developed the idea for the foundation of the 'Neue Künstlervereinigung München' (Munich New Artist Association ) for which the four artists aligned with other Munich artists in 1909. In December the same year the group‘s first exhibition took place in Munich. Two years later the 'Blauer Reiter' (Blue Rider ) was called to life as as a new concept of artistic co-operation. In 1913 Jawlensky participated in Herwarth Walden's first German autumn Salon in Berlin. When in 1914 World War I began, Jawlensky was expelled from Germany due to his Russian citizenship. He moved with his family and Marianne von Werefkin to St. Prex on Lake Geneva and remained in Switzerland until 1921, where he began painting his abstract heads in 1918. Afterwards he finally settled in Wiesbaden.

In terms of their abstraction, the heads that Jawlensky developed from portraits in the 20s, in order to transform them to his ‘Meditations‘ later on, are a visualization of what Jawlensky strove to achieve in completing his idea of an image. Clemens Weiler wrote on this matter: "With the head ‘Urform‘ Jawlensky stylized the face even stronger in 1918, sort of reducing it to a formula, however, not a lifeless one but one that is full of vigor." (translation of: Clemens Weiler, Jawlensky, Köpfe – Gesichter - Meditationen, Hanau 1970, p. 20). Relying on the formula that has been worked out, the artists gets help from the magic of the color. Just as it was the case with the later ‘Meditations‘, the abstract heads are also an expression of an existence deeply rooted in religion, searching the pristine of the transcendental and what goes beyond the agonies of the ordinary. Jawlensky finds his way back to the origins of Russian art, the icons, their expression devoid of any individuality comes closest to his idea of an archetype. This painting is a prime example of this important series of works.

The National Socilaists imposed an exhibition bam on him in 1933. A year later the artists begins with the series of works in a small format called “Meditationen“ (Meditations ). In 1937 72 of his works are confiscated as degenerate. Four years later, in 1941, Jawlensky died in Wiesbaden. [KD]. 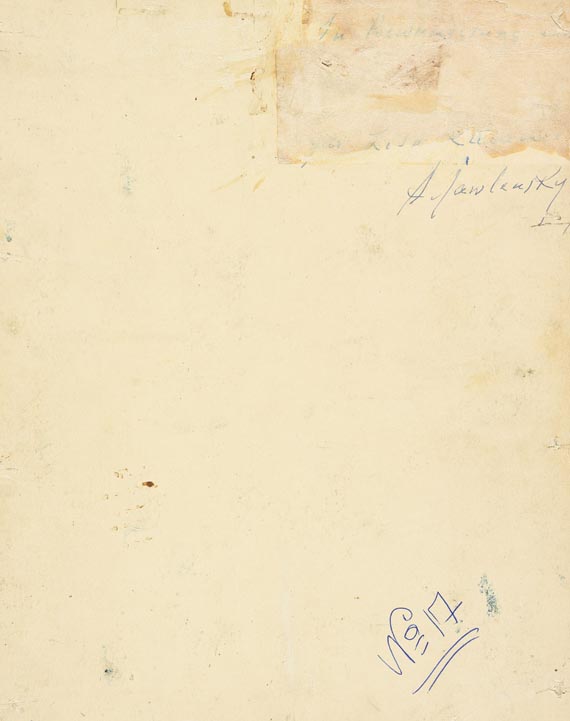