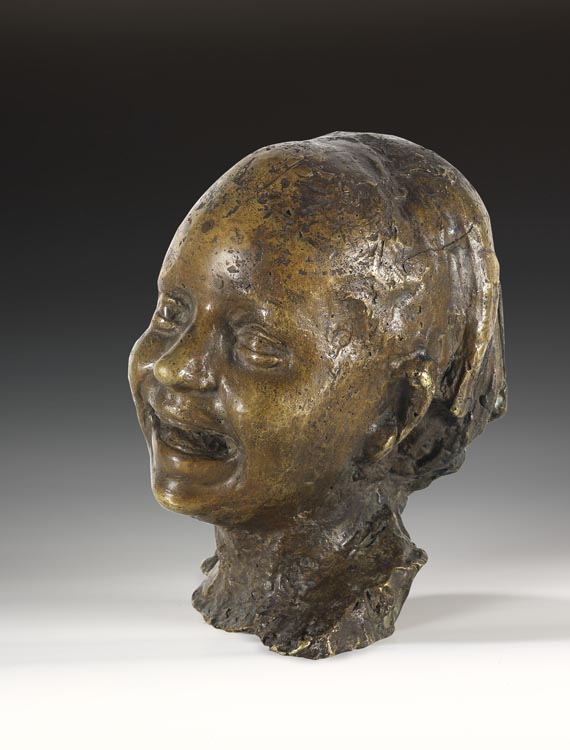 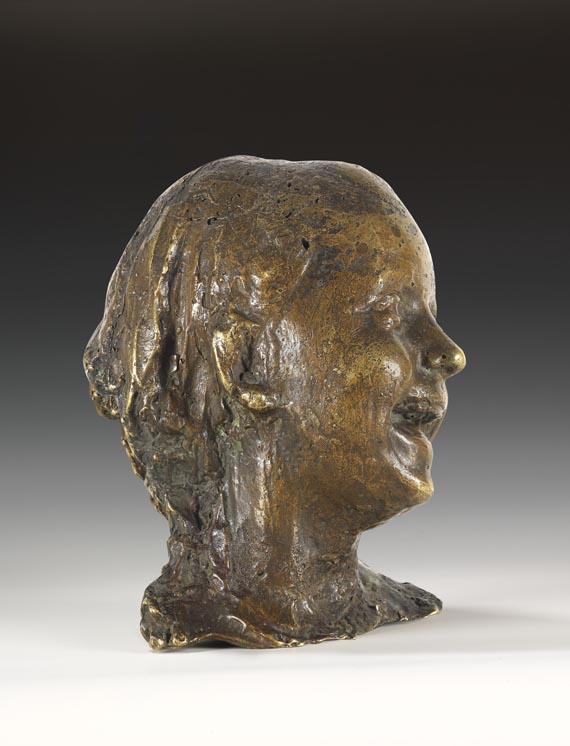 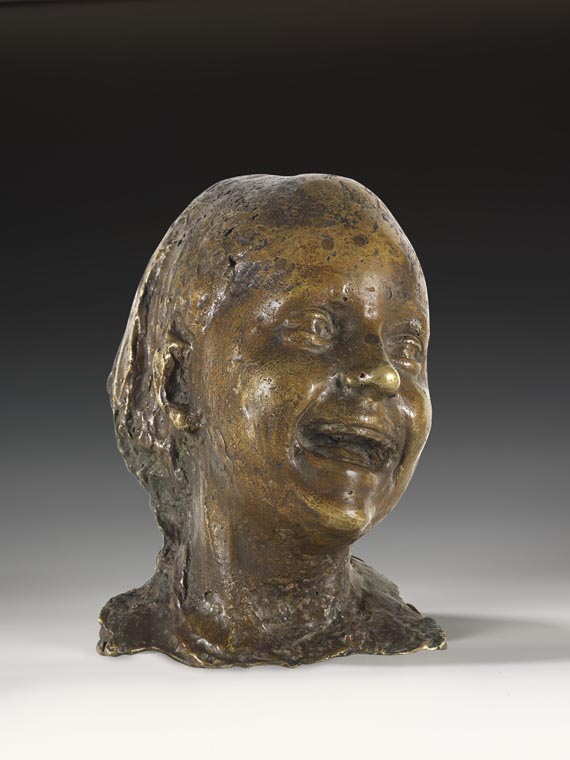 This work is accompanied by a photo expertise from Frau Dr. Paola Mola, Milan, dated 19 October 2009. The bronze could not be included on time into the catalog raisonné that has just been released.

Medardo Rosso was born the son of a station master in Turin on 21 June 1858. At first the family was living in Turin until they moved to Milan in 1870. His first artistic enterprises fell into the time of his military service, which he did in Pavia from 1879 to 1881. Unfortunately, none of the landscapes and interior scenes made in those years are in existence today. A bust of his teacher, Pacifico Busto, is considered his first sculptural work. Having returned to Milan, the young artist had his first studio. He joined the Accademia di Brera in 1882, however, he was expelled a year later for disciplinary misdemeanor. Medardo Rosso's rebellious spirit, which was entirely obliged to the progressive development of art, showed from an early point on. This spirit would coin his work throughout his entire life. His close contacts with the Milan group of the "Scapigliatura", who asked for a similar renewal of arts as the Impressionists did, is also an example of his mindset. Also in 1882, he showed four works on the "Esposizione Internazionale di Belle Arti" in Rome. Other exhibitions followed, for instance the "Salon des Champs Elysées" and the "Salon des Indépendants", where the artist, who had married by that time, also showed his works. After a short time in Vienna, he showed works at the 1887 Venice Biennale, in 1888 in the Royal Albert Hall in London. After having separated from his wife, Medardo Rosso moved to Paris in 1889, where he opened a studio soon after his arrival. In 1893 he became acquainted with Auguste Rodin, who offered him to exchange two works, as he was so fascinated by Rosso's sculpting. In 1896, Medardo Rosso moved into an apartment with an own foundry. The last design for "Balzac", which Rodin presented on the Salon in 1898, led to a dispute between the two artists, since Medardo Rosso regarded the design's concept as following his own work too obviously. The artist accepted French citizenship in 1902. His participation in the 16th Vienna Secession exhibition in 1903, where works of Impressionism were shown, was crowned with success. In 1904 Julius Meier-Graefe released his widely noticed history of modern art, in which he also gave an account of a visit to Medardo Rosso's studio. The same year the Parisian "Salon d'automne" shows work groups by Medardo Rosso, Cézanne and Renoir, whereas the works of Rosso attracted the critics' particular interest. His mastery in Impressionist sculpting earned him more praise than Rodin. Further exhibitions, one-man shows as well as acquisitions from international collections follow. After several stays in Italy and Switzerland, Medardo Rosso finally decided to return to his home country for good in 1922. He continued working in his studio in Milan, one of his last projects was the participation in the "Exhibition of Modern Italian Art" in New York as well as in the "Exposición International de Pintura y Escultura" in Madrid. The artist died of the consequences of an accident in his studio in 1928.

Medardo Rosso spent several weeks in the Hôpital Laborisière in Paris in October 1889, where he was working on a portrait of Marie-Jacques Enjolras, the daughter of the administration manager. Executions in gypsum, terracotta, wax and bronze were also made. They became known under the titles "Bambina ridente" and "Bambina che ride". Just as Maillol and Rodin, Medardo Rosso is also perceived as a renovator of the history of modern sculpting, whereas he followed his very own rules of composition and cognitive aesthetics. It is the spontaneous expression, the moment of a certain perception, rendering a particular artistic impression that attract the artist's interest and that he sought to realize plastically. His works in their overwhelming liveliness are obliged to the impressive portraits of Desiderio da Settignanos (around 1430 Settignano - 1464 Florence), however, in terms of use of forms they attain yet another dimension of artistic creativity. The moment that Medardo Rosso sought to captivate was subordinate to the rules of his own aesthetic perception, which stood for both the detachment from the contour line as well as a strict rejection of academic norms. The moment that is to be conveyed can only be perceived and rendered from one perspective. This aspect does not allow for the object's omni-directional view. Open, sketch-like modeled surface structures, which the artist realized by means of flexible gelatin casting molds, play with effects of light and shade and allow the artist to outline his artistic concept. In doing so, it is not the materiality of the selected material that is of importance, but rather its ability as an experimental carrier of the conveyed moment. Medardo Rosso described the actual quality of sculpting in his own words:
"By bundling all his impressions, the sculptor has to render all that has touched his sensitivity, so that the audience perceives the special feeling the artist had when observing nature in all its wholeness". [CM].

More Information
+
Sell
Get a free appraisal for a similar object!
+
Register for
Medardo Rosso
+
Buying from A-Z
+
Contact a specialist
Share