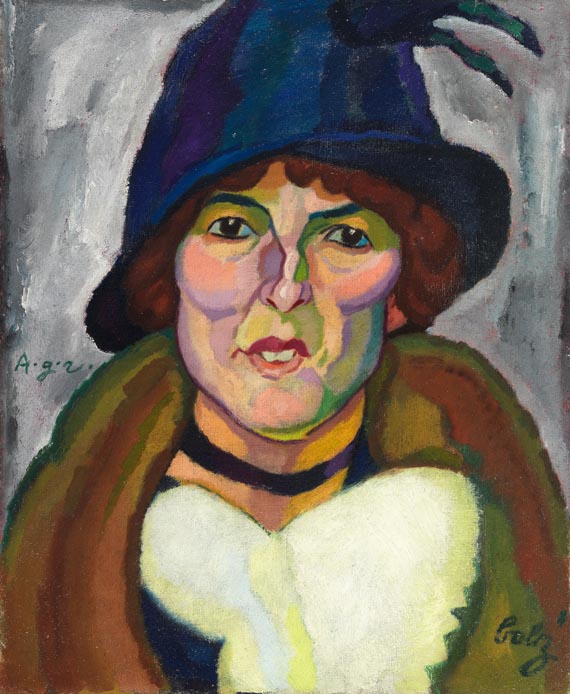 This work is acompanied by a photo expertise of Mr. Ernst Cremer, Aachen, from November 2009.

Hanns Bolz presumably completed his studies at the Düsseldorf art academy around 1905/08. In the following he went to Paris where he spent most of the time until the war broke out. He rented a studio on the Montmartre, in rue Gabrielle 49, which had been used priorly by Pablo Picasso. He was a regular guest in the Café du Dome and was soon part of the small German artist colony, which had gathered around Purrmann and Levy. This must have also been the latest point for him to become acquainted with the art dealer Alfred Flechtheim, who showed works of the illustrious and heterogeneous "Domiers" in his gallery in 1914 for the first time. Based in Paris, Bolz went on various short trips and made Munich his second home town. By 1911/12 he had become integrated into the circle of the Schwabingen Bohemians and made a name for himself as, among others, satirical illustrator for the magazine "Komet".

The life and work of Hans Bolz can be only be reconstructed on the basis of a few main dates and events. Before his early death in the convalescent home Neuwittelsbach near Munich he had enacted that his entire oeuvre should be destroyed, which is why only very few individual pieces of his paintings, drawings and sculptures are known of today. This work, made in the French metropolis, is part of his Paris estate, which friends of him were able to save from being destroyed in 1920. A meager amount of just 30 oil paintings, Bolz's complete oeuvre, could be presented to the audience in the estate exhibition "In memoriam Hanns Bolz", which was set up in Galerie Flechtheim in 1922. Our portrait "Frau mit Hut" (Woman with Hat ) was also part of this exhibition. Yet, in this portrait Bolz, who had the reputation of having been a laddish Don Juan, did not put the emphasis on a woman as the epitome of eternal and flawless beauty. He made rather a cool analysis of his sitter and created a striking female head with a great expressiveness, a talent he had profound mastery in due to his caricaturist activities. In their frontal position on the painting, the feather hat and fur stole surround the charismatic facial features of the elegant unknown woman, who seems to energetically emerge from the image composed of lucent color fields that are rich in contrast. In our work from his late Paris years, Bolz seems to have combined the formal influences of Cézanne with those of the Fauves in a gripping manner. He who is able to decipher the meaning of the letters "A-g-r" will definitely get a great deal closer to the mysterious identity of the depicted person, however, this is almost of marginal relevance in the face of this impressive and cool character sketch.

Bolz showed works on all important exhibitions in his days. He took part in the "Sonderbund" exhibition in Cologne in 1912, the Armory Show in New York and Chicago and in Herwarth Walden's 1st Deutscher Herbstsalon (German Fall Salon ) in Berlin in 1913. Together with Wassily Kandinsky he showed works in the Aachen Reiff-Museum in 1913. The artist was drafted for military service in 1914 and was sent to the frontier, where he suffers a severe gas poisoning that leaves him partially blind. He was released from military service ahead of time and died in 1918 from the consequences of his poisoning. Otto Freundlich wrote a haunting obituary for his long-time friend and companion in the magazine "Die Aktion". [JS].