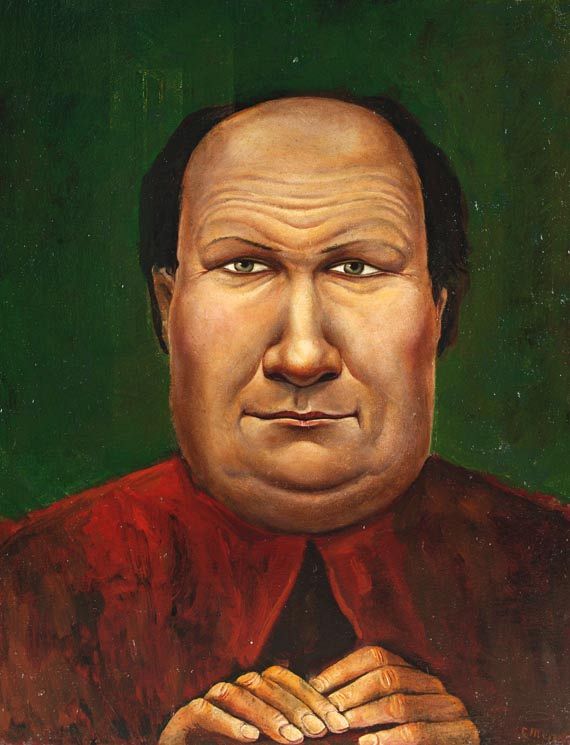 Carlo Mense was born in Rheine, Westphalia, on 13 May 1886. At his father’s request, he began a commercial apprenticeship, which he broke off to devote himself to painting. In 1906 Mense enrolled in the Düsseldorf Art Academy, where he studied under Peter Janssen, a history painter. On a trip to Italy with his brother Rudolf, Carlo Mense encountered reform movements, which would exert a lasting influence on him. After Janssen died in 1908, Mense continued his studies with Lovis Corinth in Berlin at August Macke’s suggestion but left Berlin even before winter term to study in Weimar and Munich. In 1911 Mense joined the recently founded “Coelner Sezession” [Cologne Secession] and the “Gereonsclub”. He went to Ascona in 1914 with Heinrich M. Davringhausen, who was a close friend of his. Conscripted for active duty on the outbreak of the first world war, Mense was unable to return to the Rhineland until after the war. Mense then became a leading light in the “Society for Art”, which founded the journal Der Strom . In 1918/19 he joined the society known as “Das Junge Rheinland” as well as the November Group. After his marriage to Vera Baske, Mense was often in Munich, where he had close contacts with Paul Klee and the Schwabing art scene. His inner circle included Oskar Kokoschka, Josef Eberz, Georg Schrimpf and especially Richard Seewald. Dire financial straits forced Mense to stay in Positano for some time while the art critic Franz Roh dealt with the sale of his pictures.
This work is an original, its remains as of 1969 were uncertain, it therefore originates from Mense’s most intensive period of creation. The architectural composition of the background was only discovered in the process of restoration and the partial solution of the first color layer. The overdrawings are very likely to not originate from the hand of the artist, as the portrait of Don Domenico with the architecture in the background was mentioned in the monography on New Objectivity by Wieland Schmied in 1969,and Mense died as soon as in 1965. The overdrawings presumably originate from the hand of Vera Mense, the artist’s widow, in whose possession of the painting has been proven. The painting would surely benefit from a restoration and a removal of the overdrawn layer. Portraits are an integral part of Carlo Mense’s visual language. The sitter is viewed with detachment and portrayed objectively: externals are captured rather than personality. In the subgenre of type portraits, Mense, like other New Objectivity painters during the 1920s, often portrayed clergymen.
While the National Socialists were confiscating “degenerate art”, thirty-four Mense paintings were removed from public collections. After serving in the second world war until early in 1944, Mense settled in Bad Honnef because his studio had been demolished in the air raids. Nothing much was heard of him afterwards until a retrospective of his work was mounted in Königswinter in honour of his seventieth birthday. [SM]

Overdrawings in the area of the background and clothing as well as smaller retouching at the chin. With slight color break-ups at the edges.